Stephen Petasky and Fulvio di Rosa have been staring at a brick wall for 10 minutes. They’re debating the minutia of a spacious shower that’s yet to be constructed and, at times, feels hard to imagine inside the rustic 16th-century Tuscan farmhouse that was falling apart only a year ago.

On the other hand, Mr. Di Rosa, an Italian architect renowned for restoring abandoned medieval hamlets into modest paradises, is an authenticity purist. So while the Albertan wants a rain-shower, the Tuscan wants a traditional shower-head. 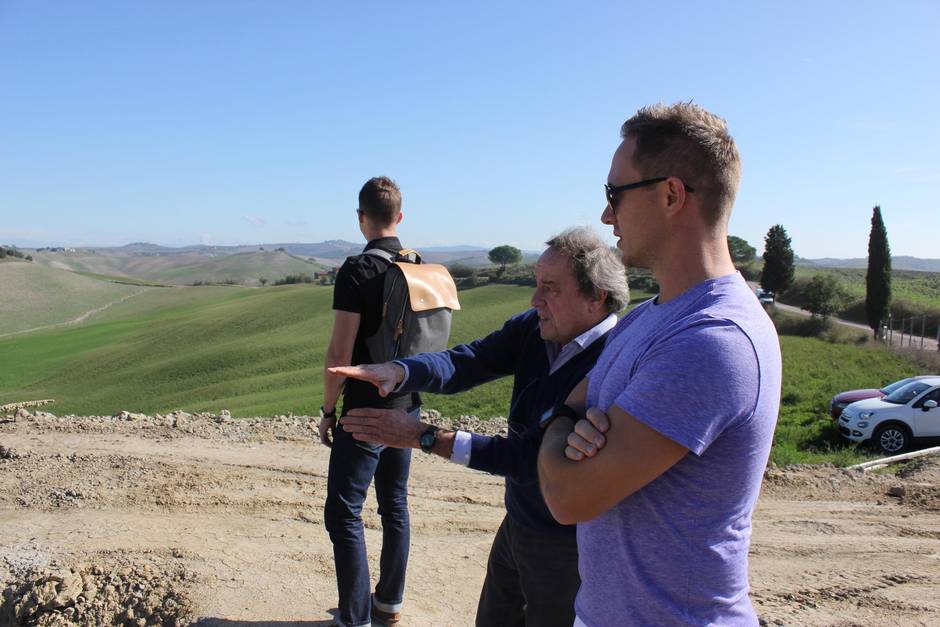 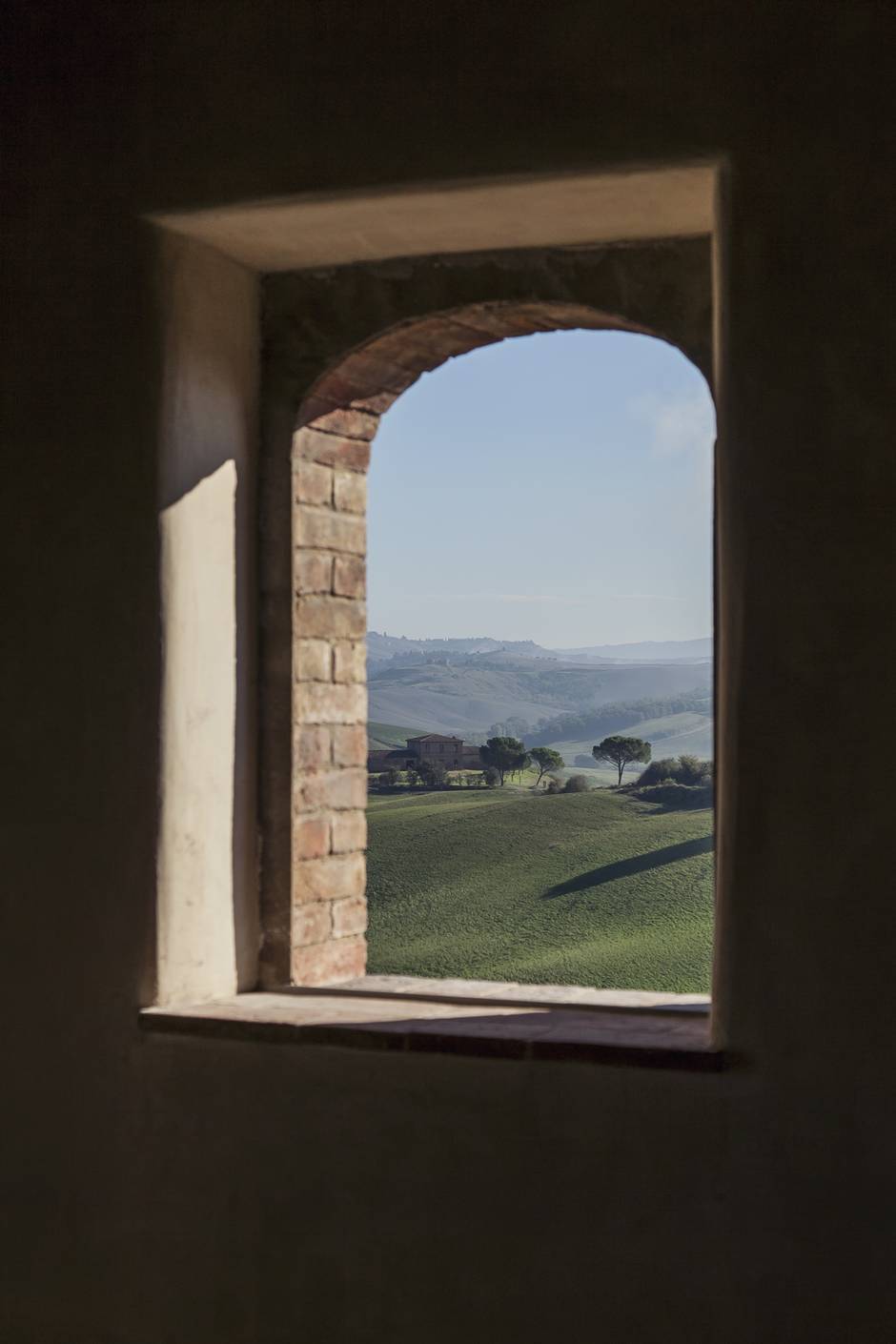 The view from a window at Podere Panico. (Marco Grillo)

Many Canadians have dreamed of the fabled “home in Tuscany,” but so often settle for the home in Scottsdale. Luxus is helping some of them fulfill that dream by buying up these endangered farmhouses before they fall to the ground. They’re increasingly rare, especially since the publication of Frances Mayes' 1997 memoir, Under the Tuscan Sun, which accelerated the cottage industry. Mr. Di Rosa, who counts Ms. Mayes amongst his clients and friends, has partnered with Luxus, based in the Edmonton suburb of Sherwood Park, to turn these former peasant estates into campgrounds for the rich.

Mr. Petasky, 35, hopes to acquire more ruins but “Podere Panico,” which doubles as a rental property, is Luxus’s first full restoration and most ambitious single-home project since it began in 2007. (It owns three other restorations in the area, near Sienna and Cortona, which were purchased from third parties after completion.) 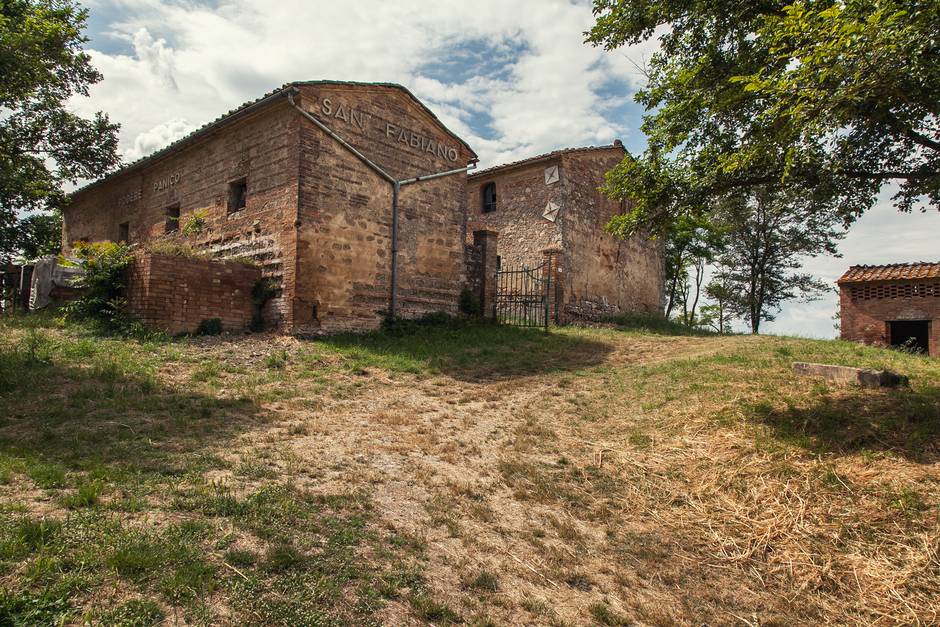 Once complete in spring of 2016, the 7,750-sq.-ft. hilltop home will have six bedrooms, 10 bathrooms, a caretaker’s suite, a courtyard and a swimming pool.

But at about $1.2-million, the acquisition cost accounts for only a fraction of the total investment. The rest is in the renovation.

Like the nearly 50 properties in Luxus’s three portfolios, an asset-value well over $100-million, Panico’s ownership will be shared by multiple investors who are paid out dividends in vacation time. 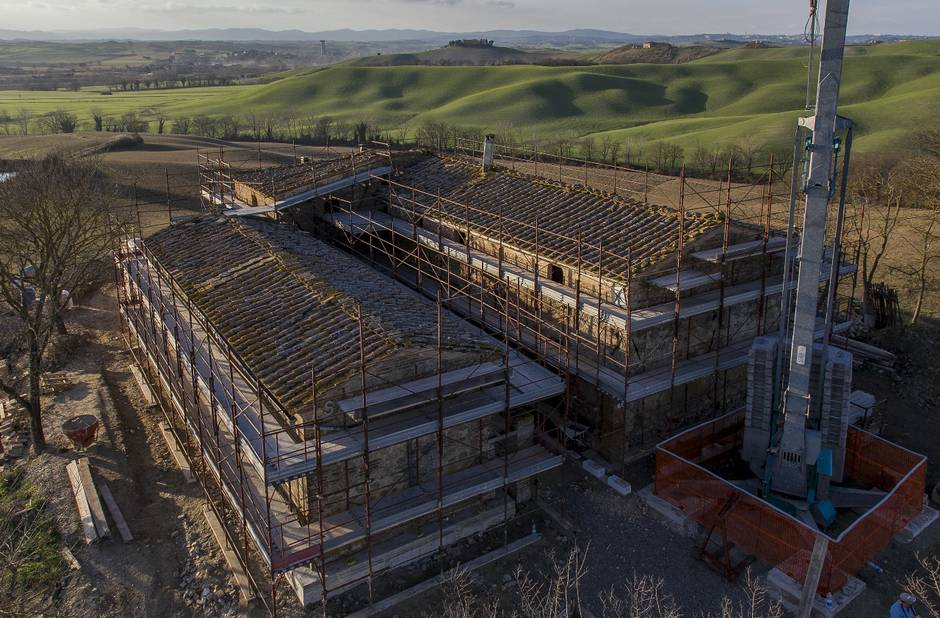 Luxus, which calls itself North America’s largest luxury real estate private-equity group, is structured as a private-equity fund, requiring an Alberta Securities Commission-approved exempt market dealer; shareholders collectively own the homes and hope for an appreciated property value after the fixed-year term, somewhat similar to a mutual fund.

“Each fund has fixed number of investors,” explains Mr. Petasky, who is also group manager. “When [shareholders] believe it’s the right time to close it, they sell it out and it’s officially capped, fully subscribed.

“And, once it’s sold, no one can buy in unless someone exits.”

Luxus portfolios typically have multiple properties investors can vacation between, but Panico is its first single-home investment fund portfolio selling for $285,000 a share, until it’s sold around 2020 for a hoped appreciated investment return. 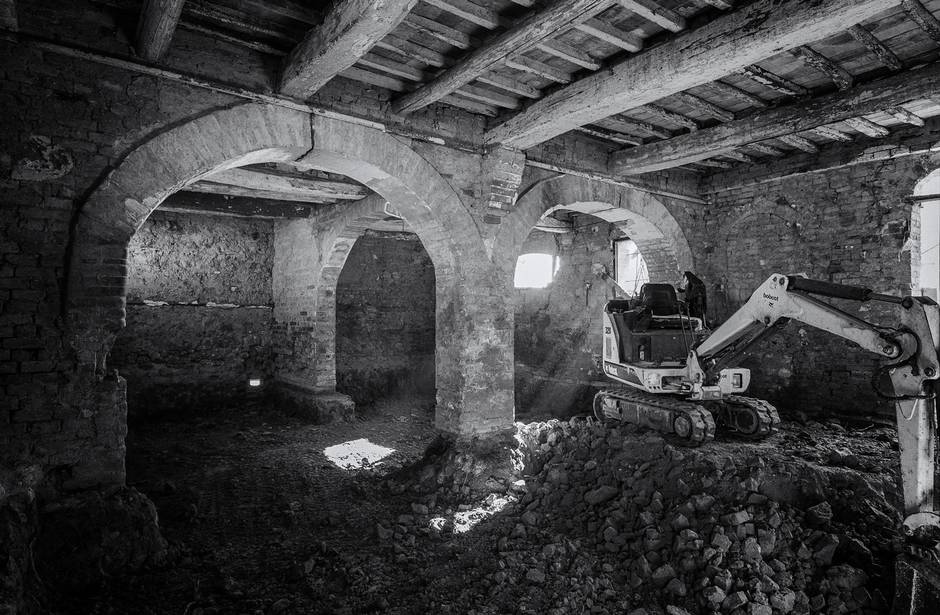 Luxus is the only company of its kind in Canada, but it’s not unprecedented, says Andrew Sirkin, a legal expert on time shares and fractional real estate. “It sounds like a closed-end ‘destination club,’” says the U.S.- and France-based lawyer, referring to a category of recreational real estate that’s earned a mixed reputation.

The fixed-terms and capped membership of Luxus, he says, provides the “safest and cleanest” structure.

Panico, Luxus hopes, will also be revenue generator. Because it can’t possibly be occupied 365 days a year by approximately 10 investors 7,000 kilometres away (Luxus investors must be Canadian residents), it’s also a $1,500-plus-per-night rental for corporate and multifamily retreats from around the world. This is novel, Mr. Sirkin says. “But if you’re just looking for a real estate investment, this probably isn’t the best one. The main reason is lifestyle.” 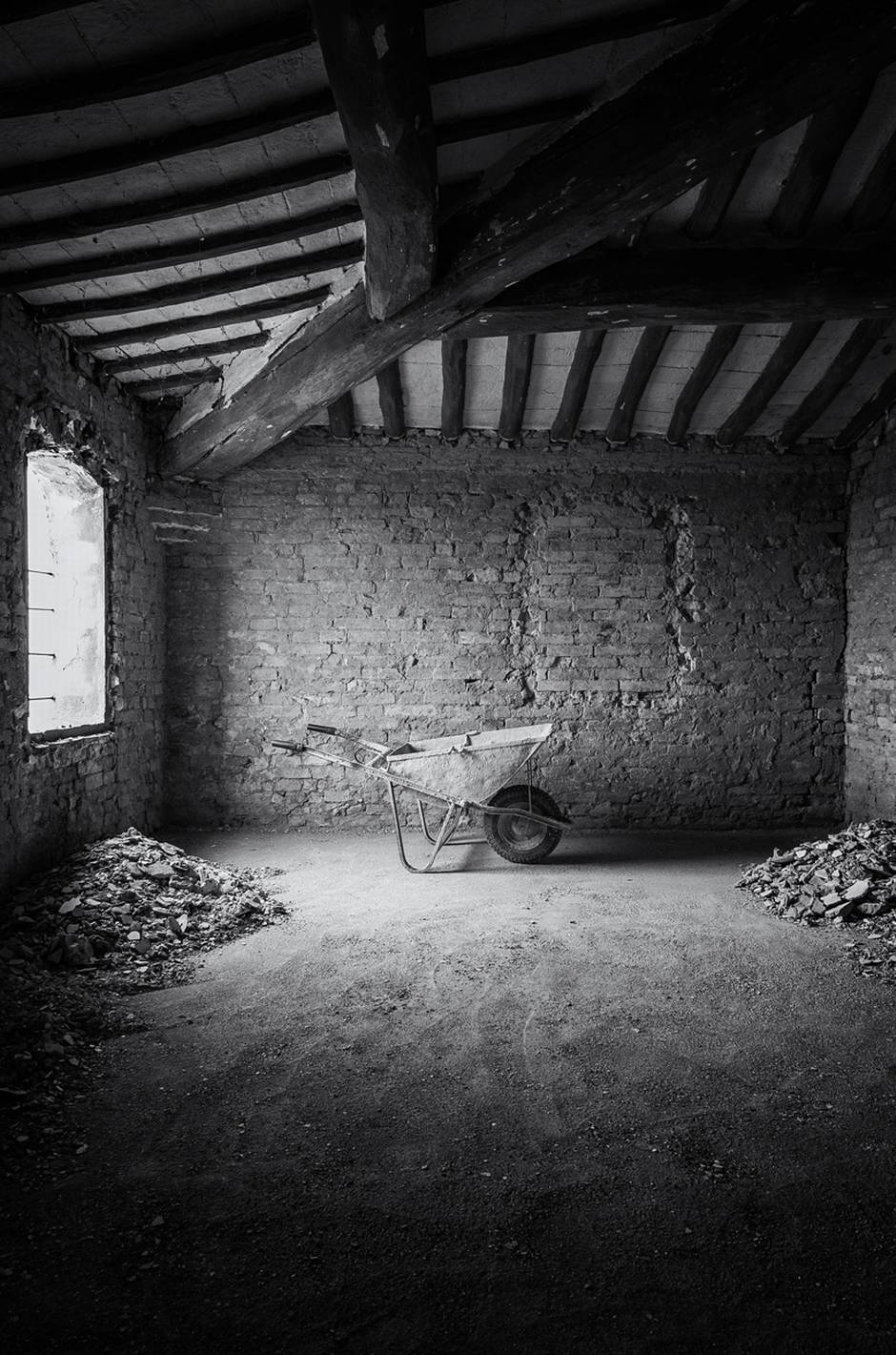 “We are kind of nomadic,” says Panico investor Paul Lessard, whose former employer, an engineering firm, was acquired by WorleyParsons for $1.13-billion in 2007. “The product was just something you can enjoy, invest in and get a return in a reasonable short term.”

It’s his first Luxus investment. But like most of the company’s now 400-plus investors, Mr. Lessard is from Alberta, which is in the throes of the toughest economic recession since the 1990s. Project manager Jonathan Lawrence anticipates more difficulty raising capital, but less so with Panico.

“Ultimately our [rental] clients will come from around the world, so we don’t expect a recession in Alberta to impact the rentals,” Mr. Lawrence says. 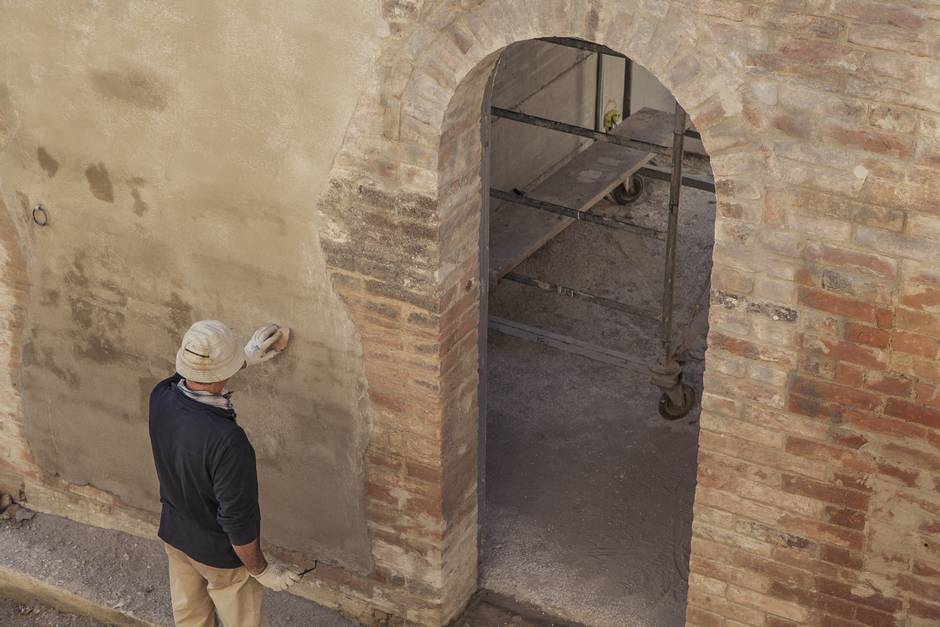 Another challenge is translating North American’s concept of luxury to Tuscany. Luxus learned its first lesson in Tuscany’s fatal purism following criticisms for its marketing Panico as a “villa.” It’s technically a podere, or grain-house, hence the new name Podere Panico.

The company embraced it, and hired Mr. di Rosa to source 300-year-old beams, $30 antique roof tiles and a stone sink reminiscent of the troughs that once fed hogs and cattle on the ground floor. Evidence of the animals can still be felt on the curved edges of entrances their bodies grazed. In October, Mr. di Rosa’s master painter spent up to 50 hours painting the master bedroom with a dirt-mixed coat to look centuries older.

But there are limits to its rustic charm, plus Canadian expectations to fulfill, hence the sleek pool that received approval from county officials on the condition it can’t be seen without a drone. 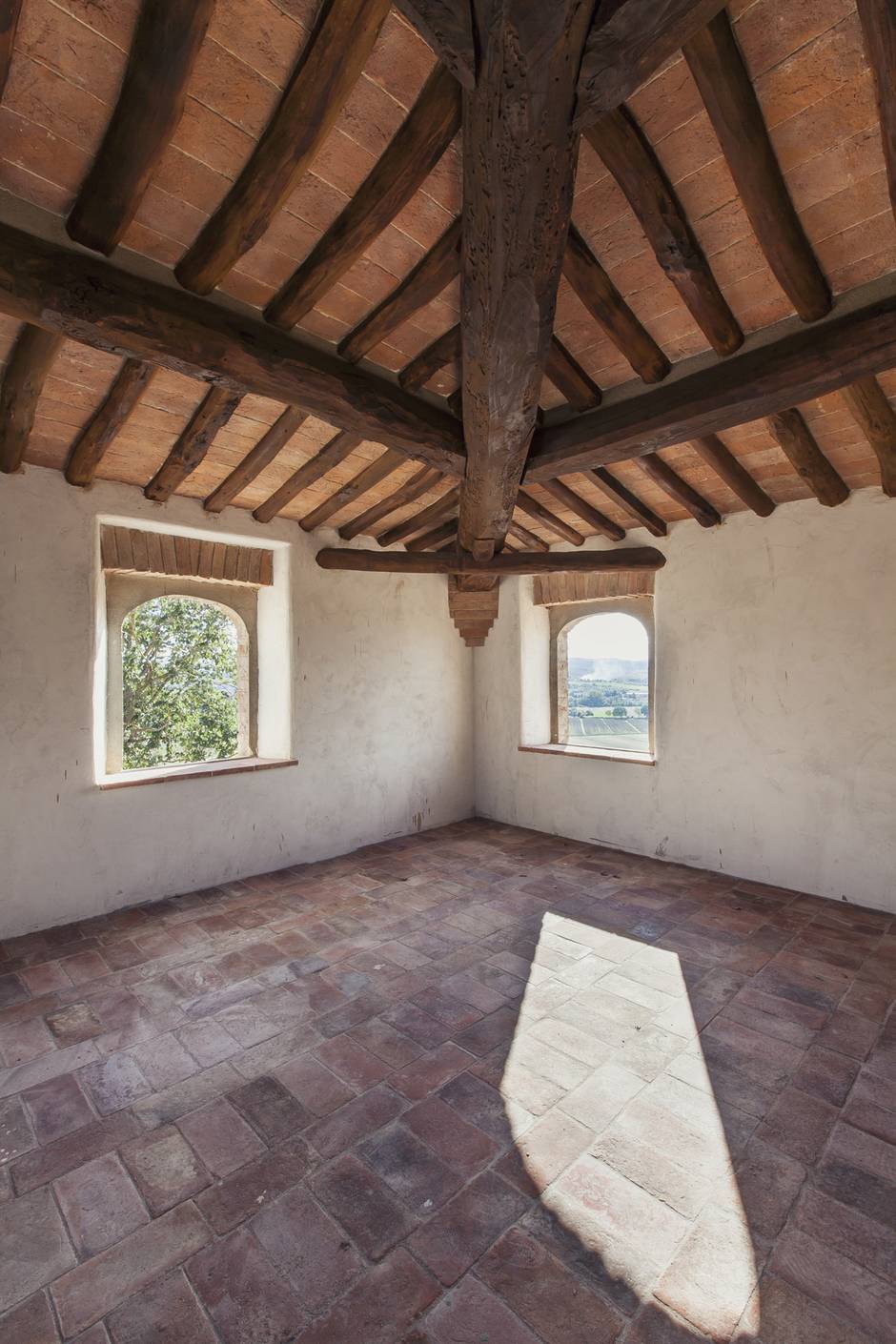 “Pools are a huge issue here, because it's obviously not authentic, so we’re trying to do a very minimal design,” Mr. di Rosa says, inspecting the semi-complete amenity on the hillside with his Canadian client.

“He rejected our idea of a waterfall,” Mr. Petasky adds. He turns in the direction of bell-ringing below the hilltop. A shepherd is calling a herd on what’s technically his property. “Wow,” he says with genuine delight. “A real shepherd and a real sheep dog. Hope they’re not ours.”

The writer was a guest of Luxus Group. The company did not review or approve this story.