Imagine living in 700 square feet of space, in an apartment, centrally located, stylishly appointed, with stainless steel appliances and public amenities such as a dog wash station. You don't own a car; instead, you rely on transit or a bicycle for getting around. Unlike the old days, it's not a temporary station until you can afford a house. It's life as you'll always know it, as you grow your career and maybe raise a family.

You'll probably move around, from job to job, and city to city. You might consider yourself fortunate to have the freedom from the shackles of a big mortgage, job with benefits, and house that needs ongoing maintenance. Or, you might resent the fact that you can't afford the home ownership rite of passage that belonged to your parents' generation.

Millennial or Gen Y kids born between 1977 and 1994, if we use the Census Canada definition, have entirely different expectations from their parents.

"They will be the first generation that is not going to be better off than their parents were," says Melanie Reuter, director of research for the Real Estate Investment Network.

Her interpretation. But, because millennials are such a large group in Canada, representing about 27 per cent of the population, says Ms. Reuter, it's imperative that businesses gauge this group's behaviour and respond accordingly. She has been studying Gen Y economic behaviour for the last few years, and has written a report on her findings to be used by investors.

"If you don't pay attention to what this generation wants, regardless if you agree or not, you won't have a business soon because they are such a large cohort that they do have spending power."

They also have a lot of debt. A hefty part of that debt is student loans, but credit card debt is also responsible. British Columbians between the ages of 18 and 24 have the second to highest income-to-debt ratio on average in Canada, according to Ipsos Reid, 2012 Canadian Financial Monitor. British Columbians between 24 and 44 are in third position. (The highest average income-to-debt ratio belongs to Albertans between 25 and 44).

"It's also in part due to their spending habits," says Ms. Reuter. "These are all generalizations – but they aren't savers."

They might have grown up in a bedroom community, such as the west side, or a suburb. But they are a more urban group, no longer dependent on a car, partly because of cost, and partly because they genuinely care about sustainability. They don't see the cachet of owning a car, as did their parents' generation.

"They didn't get their driver's licence the day they turned 16," says Ms. Reuter.

"For the younger generation, it's almost a badge of pride they wear, not needing a vehicle."

Because they use transit, they'll want to be located close to work, and close to transit hubs. And because of the rise of single-parent households – roughly 16 per cent of all families, according to 2011 census figures – many were likely raised in townhouses or condos, and will already be used to living in smaller spaces, says Ms. Reuter. They also like new spaces, as opposed to old houses they'll have to spend weekends fixing up.

We've already seen the demographic shift in Vancouver neighbourhoods such as Dunbar, Kerrisdale, Point Grey and Kitsilano that used to be filled with middle-class families just starting out in life. Young families have mostly gone to the more urban east side, leaving the west side to an older, wealthier demographic.

Ben Smith, VP of sales and marketing at Rennie & Associates, says he's already seen a major shift in the last six months. This year he's seen a sudden surge in demand for three-bedroom condos, purchased by downsizing boomers. Those boomers are trading their homes for spacious condos. Those same boomers are helping their kids with a down payment on their own condo, which is the only way a lot of Millennials will ever afford to live in Vancouver.

"It's exciting, because for years we've been talking about this, and we're finally seeing it happen," he says. "There is $88-billion worth of clear-title real estate tied up with boomers. In B.C. and Vancouver especially, we are all equity and no income. If you don't have that down payment, you don't have a home."

Hrissa Soumpassis, 31, grew up in a house in Prince Albert, Sask., and currently operates her own fashion label out of her rented 700-square-foot live-work studio at Main and 5th Avenue. Like all Millennials interviewed, she does not own a car. She works from her home, enjoys urban life, and has no problem moving for work. She plans to live in New York for six months, and then return to Vancouver, where she'll eventually settle down and purchase a condo in the same neighbourhood, if all goes according to her plan. She says that growing her own business and condo ownership are priorities.

"All my money goes toward my business because that will grow," she says. "It's not like, 'Oh, I think I'll start my business and see how things go.' I have to organize all my finances with the bank to make sure that in the future I can buy something. That's new for me. I wasn't thinking about that until about a year ago."

Jens Ourom can divide his demographic into three categories. There is the group that sees home ownership has an "unrealistic sacrifice from both a financial and lifestyle perspective." There is the group that is "raging mad, resistant to retiring as renters – a potential powder keg whenever affordability, housing prices, mortgages, and anything related to the white picket fence … are broached as conversation topics." And then there is the "What's the big deal about affordability?" group. Members of that group are counting on a trust fund or big inheritance to get them into the homeowner income bracket.

Mr. Ourom, 27, says he belongs in the first camp, that Millennial who sees pricey property as just too big a sacrifice when there's so much else that the world has to offer. He is debt free because he worked hard to get scholarships to pay for his degree. He lives car-free and pays a premium in rent to live centrally.

"I really think the concept of saving for a home is maybe overblown and what you should be doing is saving for a future," says Mr. Ourom. "If your goal is to have a home and work on a home and invest in that, then great, but this generation is already finding different ways they want to save for the future, whether it's investing in education, or starting a business. I think people are getting more creative with it."

Ben Paylor, 29, is doing his PhD in experimental medicine at the University of British Columbia, but he will not stay in Vancouver because of the high cost. Instead, he expects to move several more times for his career, and he'll settle somewhere more affordable. He does not, however, see his situation as unfortunate, but rather, as liberating.

"My friends who got teaching jobs, they are mostly still in Calgary and they have bought houses because it made sense, given the life they were following. But the prevalence of that is so much less. I don't look at that negatively; some part of me is envious as well. It just seems so simple, not moving around all the time. But there is some awesome stuff I have been able to do because of my education. There is a trade off involved there.

"With my path and my work I am in, I will likely move around three or four more times before I settle down. I might not own property for five to eight years, or something like that. Questions like that are quite abstract to me right now."

Because he owns a house, James Griffiths, 34, is an outlier among his peers, he says. He and his wife own a modest house on a narrow lot on Vancouver's east side. However, to cover their mortgage, they rent out four bedrooms, which means a constant turnover of tenants. Mr. Griffiths is a self-described workaholic. He obtained his masters while working a 40 to 50 hour work-week. He could only afford the down payment, he says, because he and his wife cared for his ailing grandfather in his final years, living in his grandfather's basement suite rent-free.

"That was a very difficult thing to do," he says. "It's psychologically challenging to help someone you love in the later stages of their life. But that's one way we found to both save up, and contribute to our family."

That helped him pay off his student loan and, along with help from his parents, save up for the down payment. Still, he has a $500,000 mortgage.

"And I'm spooked about that," he says. "I'm very driven to get that number down, and to spend all the time I can working, and it hasn't been very good for life balance on my part."

Vancouver demolitions are ‘a whole other kind of loss’
February 7, 2014 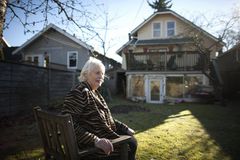 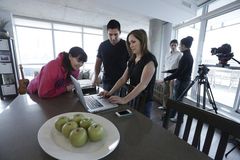 How to harness a changing Chinatown
January 31, 2014 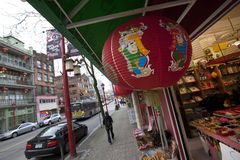