Steven Poulos never figured he'd head back to his childhood roots in Don Mills, the meticulously planned community created by E.P. Taylor in the 1950s.

But about 10 years ago, the eco-conscious project designer and president and CEO of Global Warming Prevention Technologies Inc. bought a house on Hemford Cresent, an idyllic tree-lined street in the heart of Don Mills.

Two of the tallest, oldest trees on that street happened to be Mr. Poulos's neighbours, situated beside a quaint bungalow at 53 Hemford Cres. And when that property came up for sale in 2010, he was asked to help design the new house in a way that saved the two majestic spruce trees and their extensive root system.

Even after three years of planning and building, the green giants remained unharmed.

"All of the roots are still intact and they go right under the house," he said, standing beside the trees, each one about 20-metres tall, in the courtyard he designed to save them.

So was born the 2Spruce House, a labour of love for Mr. Poulos and an exercise in environmentally aware design.

"The very first thing Steven did was call in an arborist," said sales representative Darrin Tooth, before explaining how extra wood chips and particle board were placed around the trees to protect them during construction.

And a lot of construction did happen. All that remains of the original bungalow is part of its foundation.

"We couldn't have removed the old foundation because the trees would have fallen into the basement," said Mr. Poulos.

In order to expand the size of the house, Mr. Poulos and his team – which included builder City Wide Group and Dennis Contracting – poured new concrete and then built the north wing of the home on piers to protect the root system below.

The decision to save the trees was not just an environmental one. There was also an economic motive. By keeping them, as well as another large deciduous tree in the front yard, the house is well shaded, cutting down on electrical costs and helped Mr. Poulos rack up LEED points.

Beyond its extensive foliage and natural shade, the 2Spruce House boasts many other green initiatives. For example, Mr. Poulos and his crews recycled as much as they could during the demolition, getting $1,200 for the old steel alone.

They have also wired the home to be solar ready if the new owner so desires. And many of the lights in the home are LED, "So lots of luminosity with little energy output," said Mr. Poulos.

Not that lights are needed during the day. Mr. Poulos's design incorporated 85 windows. And each room contains at least two light sources, making all of the spaces (even the basement, which has a very ingenious skylight) very bright and airy.

But for all its environmental and technological ingenuity, the house is also a thing of beauty.

"I definitely wanted to build a LEED house, but also I wanted it to be beautiful, so we didn't spare any details," said Mr. Poulos.

With its sloped roofs and cathedral ceilings, the largely wooden house has a distinct cottage feeling to it. Mr. Poulos worked tirelessly to blend all of the different woods (including cedar, poplar, Douglas fir and maple) into one seamless aesthetic. He also included quite a bit of stonework, a nod to Don Mills's mill history.

"One of the reason why we went with this style is that it really still is a classic neighbourhood," said Mr. Poulos. "So we wanted to respect that in the design and not do a big faux chateau exterior."

Undoubtedly, the immense green space surrounding the home is a defining feature of 53 Hemford. The courtyard, where the two namesake trees live, also opens up into a large back patio.

"It's like an outdoor living room and dining room," said Mr. Tooth.

The north end is a wide-open space and could easily be home to a large patio set and barbecue. At the other end, there is a long stone bench that faces a two-way fireplace, which can also been used and seen in the living room found in the south wing of the house.

The backyard is also the access point to one of the many trails in Don Mills. This one is a converted railway track that is now a paved foot and bike path that extends from Bond Park, home to the neighbourhood's sports facility, all the way south to nearly Eglinton Avenue.

Despite the beauty of the outdoor area, Mr. Poulos's favourite place is actually indoors.

"This can be your special little space where you can find serenity," said Mr. Poulos, as he closes the wooden sliding door to enclose the north wing of the home, making it one large room he refers to as the family room.

"It was meant to be a flexible space that had direct access to the courtyard," he said. "It could be a family room, or it could be a master bedroom or a music room."

Situated right beside the two spruce trees and nearly all glass, the room does feel as if it's a part of nature.

"It really is the two-spruce room," said Mr. Tooth.

Home of the Week: Island living with modern conveniences
June 20, 2013 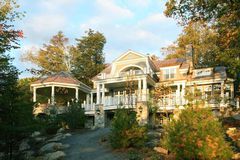 Home of the Week: A modern home at peace with the neighbours
June 13, 2013 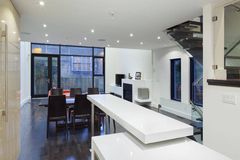 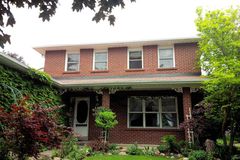