The back storyActually, this heritage home has two back stories. In 1802, Andrew Thomson, brother of Scarborough's first European settler, David Thomson (after which Thomson Park is named), purchased a huge parcel of land. In 1839, his son, James A., acquired it and tucked this two-and-a-half-storey "Romantic style" farmhouse, known as Springfield, into a natural slope for heating and cooling purposes; because of this, the rear elevation reads as one-and-a-half storeys. According to the historical plaque outside, (placed by the Scarborough Historical Society in 1979) Springfield is the "oldest brick dwelling in Scarborough," although the first storey/basement was built with local stone. Symmetrical window and door placements are somewhat Georgian, a wide, wraparound porch features decorative "trelliages," and the original, freestanding root house remains.

Forty-five years later, Kyle Raino, a 37-year-old employee of Lewitt Construction, came across the home, which had been vacant for almost two years.

While his first plan was to renovate and move in with his wife, he admits this would have been a "financial no-no," so he decided to embark on a full restoration and modernization with Lewitt Construction president Ed O'Flanagan as partner. Since Lewitt had done work on heritage properties such as the Enoch Turner Schoolhouse, Queen's Park and the George Brown house, it was a good fit.

"We've done absolutely everything," says Mr. Raino with a sweep of the hands, listing behind-the-scenes items such as plumbing, electrical and the attic's Spacepak heating and cooling unit, as well as in-your-face stuff such as the open floor plan, widened staircase and the modern 12-by-36-foot rear addition that allows for an office, mudroom and breakfast nook on the main floor and a large master bedroom and en suite above.

However, he's quick to point out that "the bones" are original. This includes the wonderfully warped, wide-plank cedar floors on the main and second levels (some of it was hiding under mid-twentieth century thin-strip oak flooring), the fully restored decorative woodwork crowning the wraparound veranda, the heritage windows – which he's christened "Frankenwindows" because of all the parts it took to restore them – and the gorgeous exposed-brick interior wall that separates the old house from the addition. Along with original window openings, this wall has initials scratched into it to remind homeowners that it was once outside.

The state-of-the-art kitchen features a massive slab of statuario marble (a clever illusion, there's an undetectable seam where it's joined to engineered stone underneath), cabinetry that's "a little traditional," and nice 1930s-ish subway tile. "It's a mishmash, and part of the reason we were totally fine with doing that is the architect of this house [did] a mishmash of styles from the 1840s: some say it's Romantic, some say it's Georgian, it goes on and on."

In the newly-dug-down basement, an acid-stained concrete floor provides the canvas for what can become a games room or fifth bedroom, and the family room boasts the home's second fireplace with a mantle made from the original 40-foot-long structural beam: "We cut a chunk out of it because it just looked so cool," laughs Mr. Raino. Another area, he suggests, might become a wine or single malt storage room.

While it's hard to beat the unobstructed view of Thomson Park across the street, Mr. Raino loves the little touches that help marry old to new, such as the reclaimed cedar floors that the team "searched high and low" for to ensure the addition wouldn't be jarring.

He also loves that a former owner of the home dropped by to give him a gift: an 1847 bible that once belonged to James A. Thomson's son, James George Thomson, which will be given to the home's new owners. 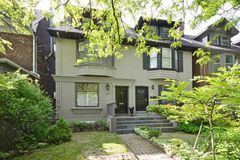 Home of the Week: Groundbreaking design stands the test of time
October 11, 2012 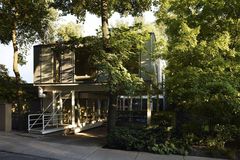 Home of the Week: Cabbagetown home keeps a connection to history
October 4, 2012 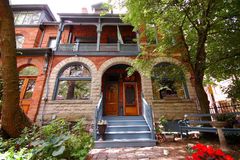