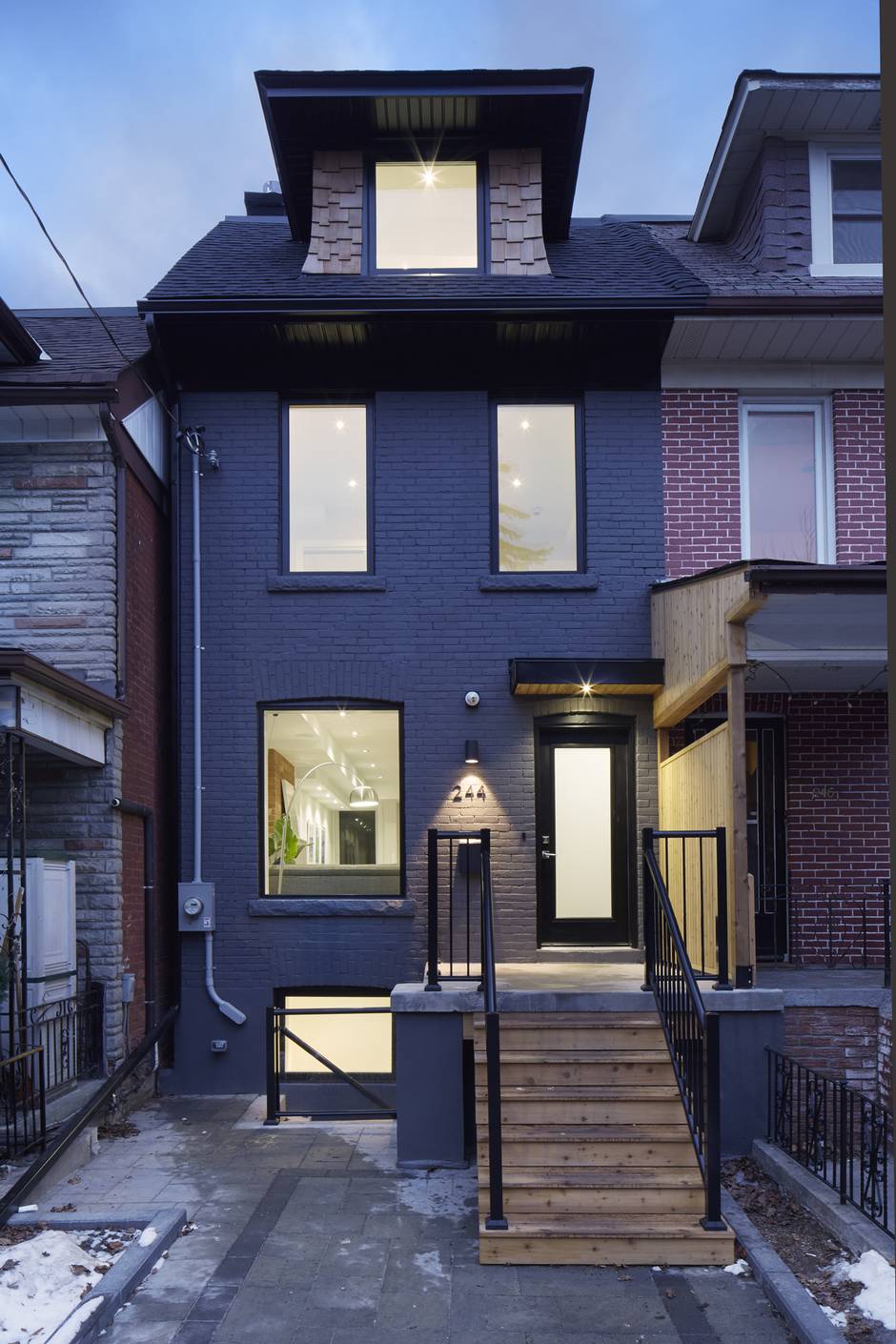 Hanging in the kitchen of 244 Montrose Ave. are three framed pages of the Toronto Daily Star from January 29, 1964. These papers were all found under the floors, presumably placed there by a previous owner.

“I found a few dozen under parts of the original floor,” said Aaron Stein, explaining this had once been a homespun trick used to dampen sound.

And now – nearly 52 years later – the home these broadsheets were found in is starting a new chapter in its history. 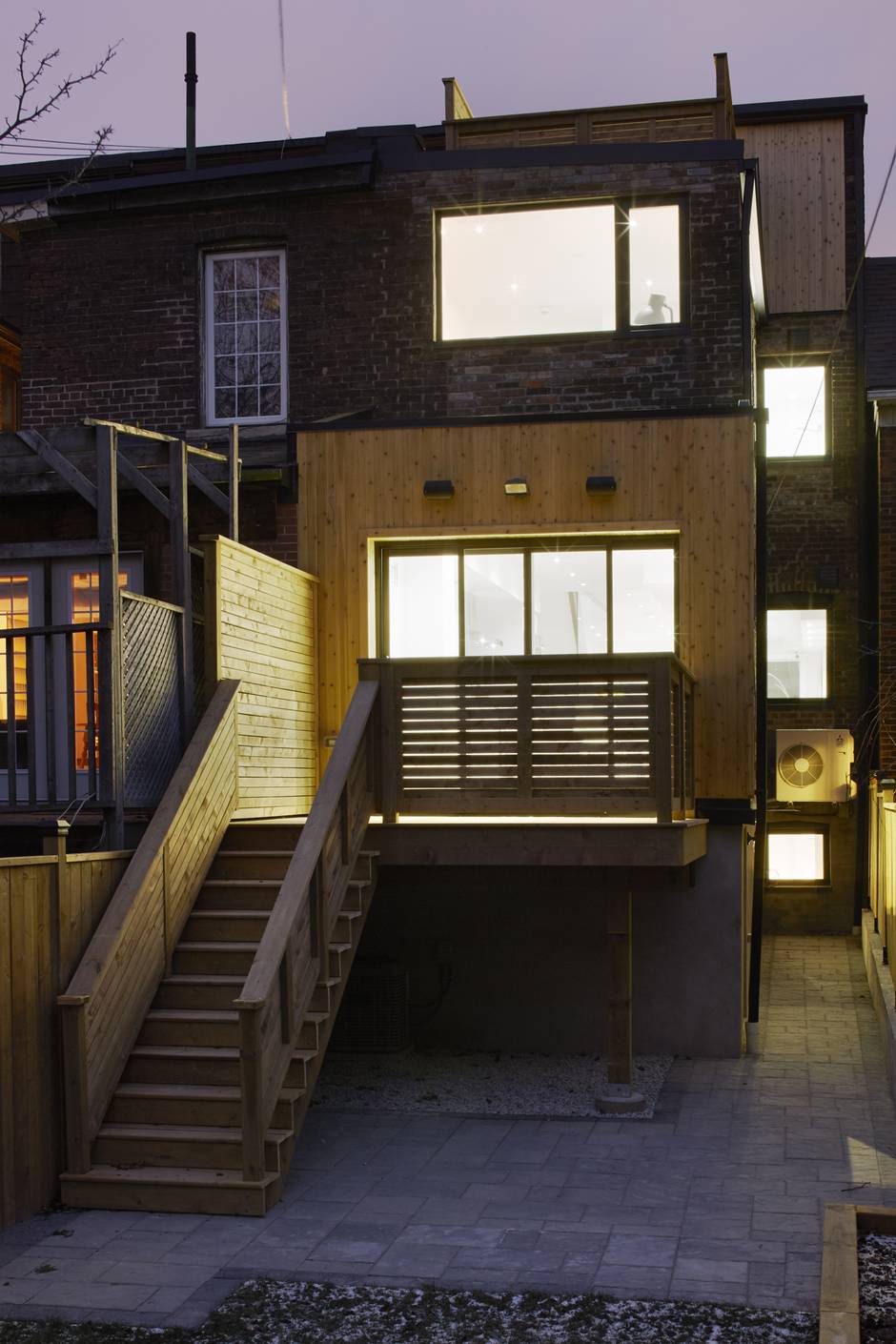 The back side of 244 Montrose Ave. (Ruby Photo Studio)

The semi-detached house in Little Italy wasn’t the first home Mr. Stein – the owner of Steinbuild, a construction management firm – tried to buy.

“People think that developers and builders have the inside scoop when it comes to buying properties but at the end of the day, we go through the same process as an average Joe,” he said, adding that he put in offers on about half a dozen properties before getting the Montrose home.

But once he had it, he and his team – including realtor Arkady Epstein – were quite pleased with it.

“[The original house] was in good shape but dated,” Mr. Epstein said. 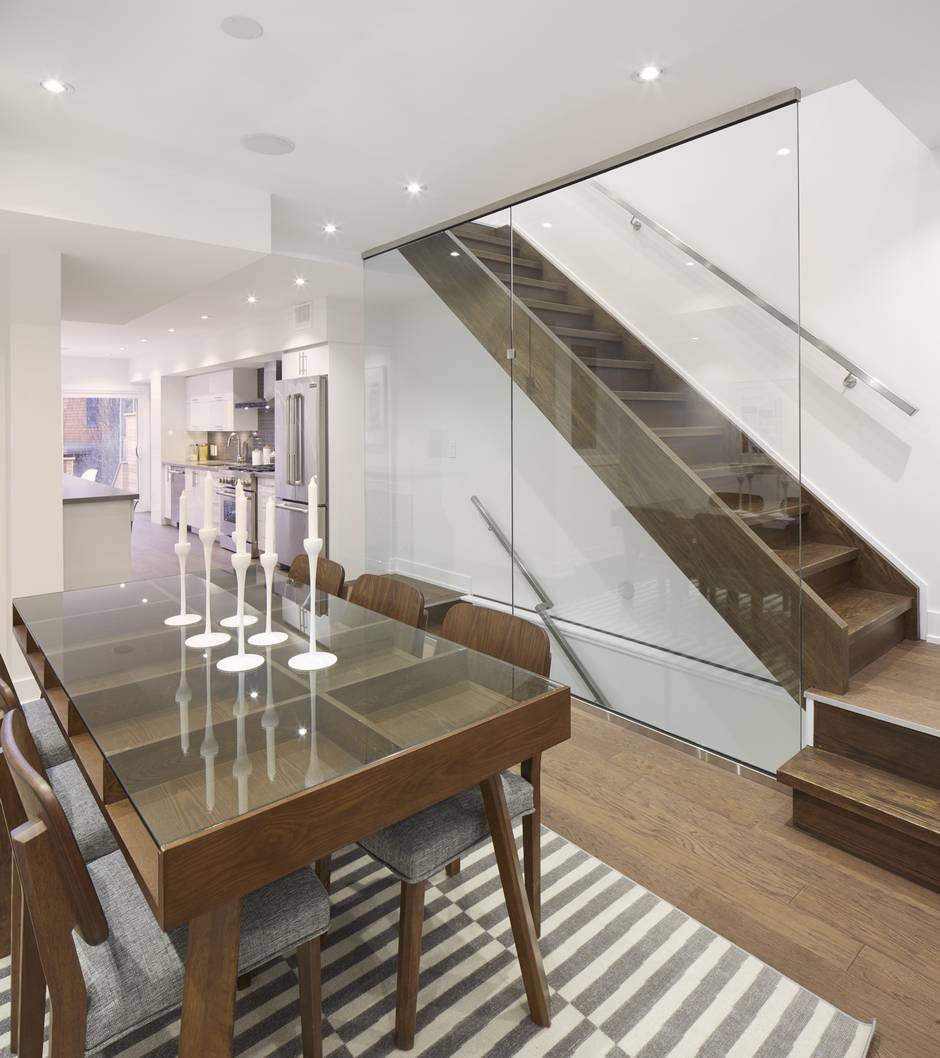 Maximizing space with an open-concept layout was a key pillar of the home's design. (Ruby Photo Studio)

This allowed for Mr. Stein’s team to take it down to its bare bones and focus the new design on three major pillars: maximizing space with an open-concept layout, having a third-floor master suite and including large windows in big bedrooms.

Beyond being open concept, much of the first-floor design was also fixated on clean lines and uninterrupted sight lines.

“The biggest thing for me was to create an openness and have a view from the front of the house to back,” said Mr. Stein, standing in the middle of the main floor where a dining space had been staged between the living room and the galley kitchen. 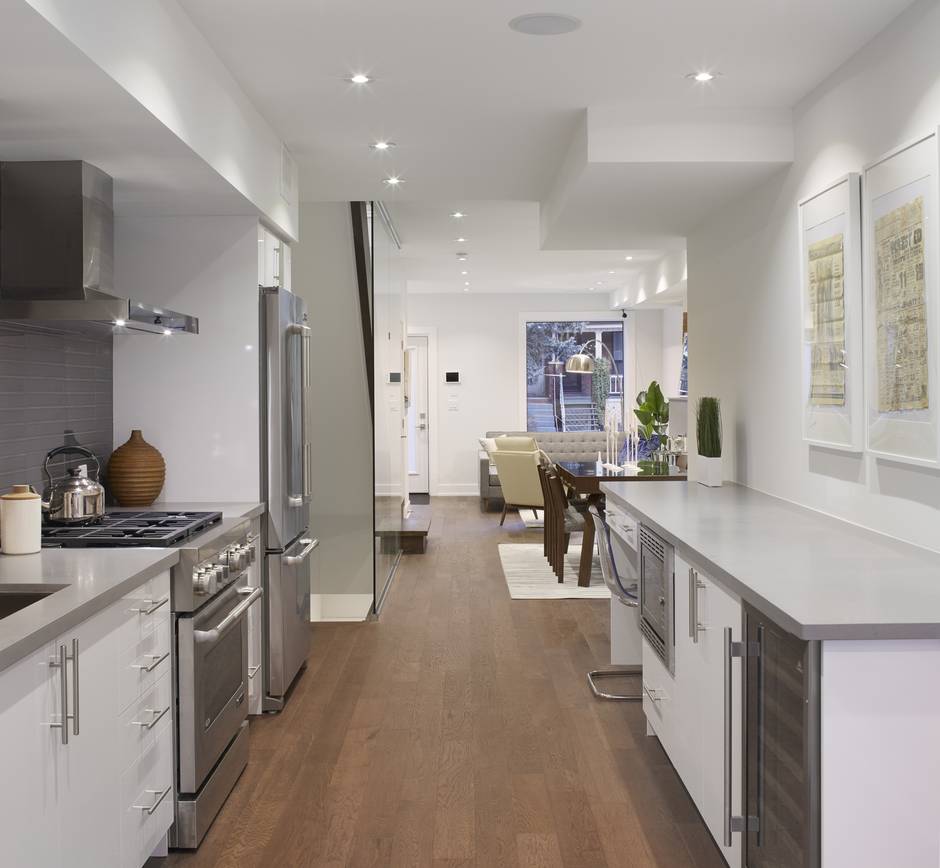 But the clean lines were a challenge because they wanted to fit a front closet and a powder room onto the floor.

“We achieved that by sacrificing the depth of a powder room [along the north wall],” he explained. “We also pushed the stairs back and added a landing, which allows us to tuck the powder room away.” 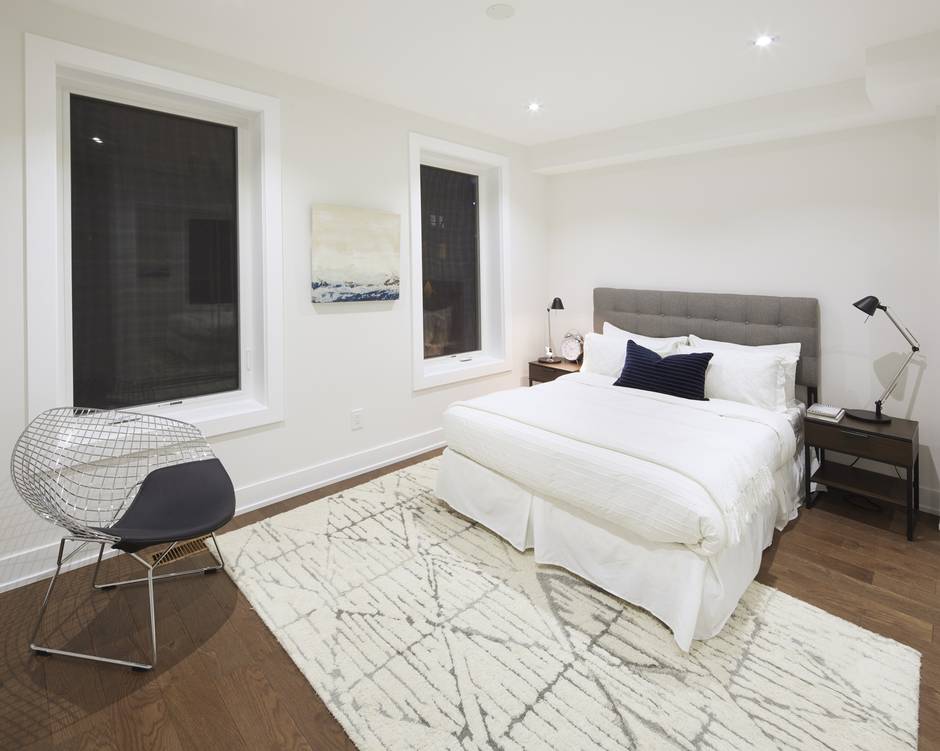 The house was designed with the needs of a young family in mind. (Ruby Photo Studio)

Together they designed the three-bedroom, two-and-half-bath house with the needs of a young family in mind.

“With the way the [real estate] market is going right now, I know that I personally can’t afford to buy a place right now, start having a family in a year or two and then have to move again. The costs associated with buying and selling are huge,” Mr. Stein said. “So you need a house that you can grow into with your family.”

Central to that idea and key to the concept of 244 Montrose Ave. was the legal rental apartment in the basement. In the original home, the basement was partially finished but only stood 6-feet. tall. Now it’s fully finished one-bedroom unit complete with ensuite laundry and 8-feet. ceilings.

“If a young family buys it now, they may want to supplement their income and then later on they can take possession of the space when they are making more money,” Mr. Epstein said. 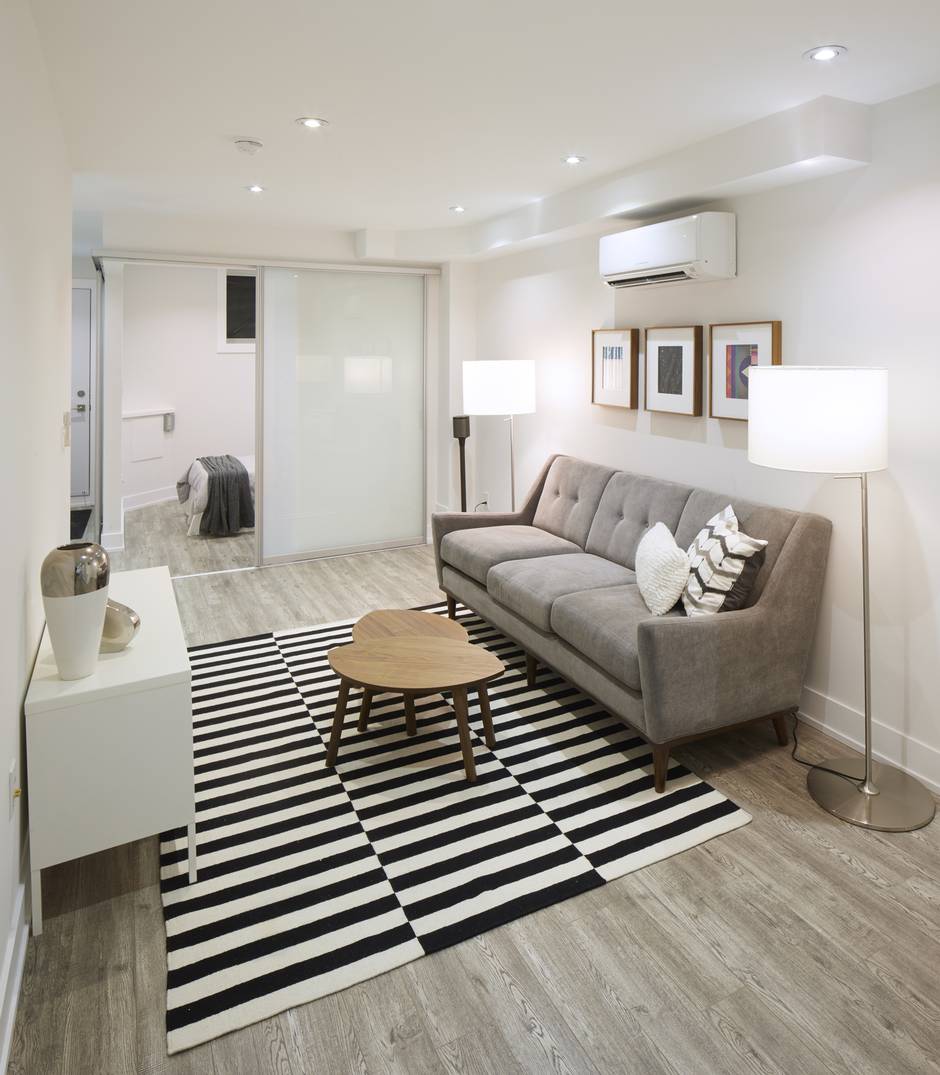 When it came to the design of the unit, Mr. Stein referenced on his experience in condominium builds.

“Condos are concrete walls and floors and this basement has a concrete floor and concrete walls, so it made sense to try to build the interior like you would a condo,” Mr. Stein said. “We sourced products like the translucent sliding doors [to section off the bedroom] and condo-sized appliances, like the 18-inch dishwasher.”

After researching rents in the area, Mr. Stein and Mr. Epstein believe $1,800 a month is a competitive price. 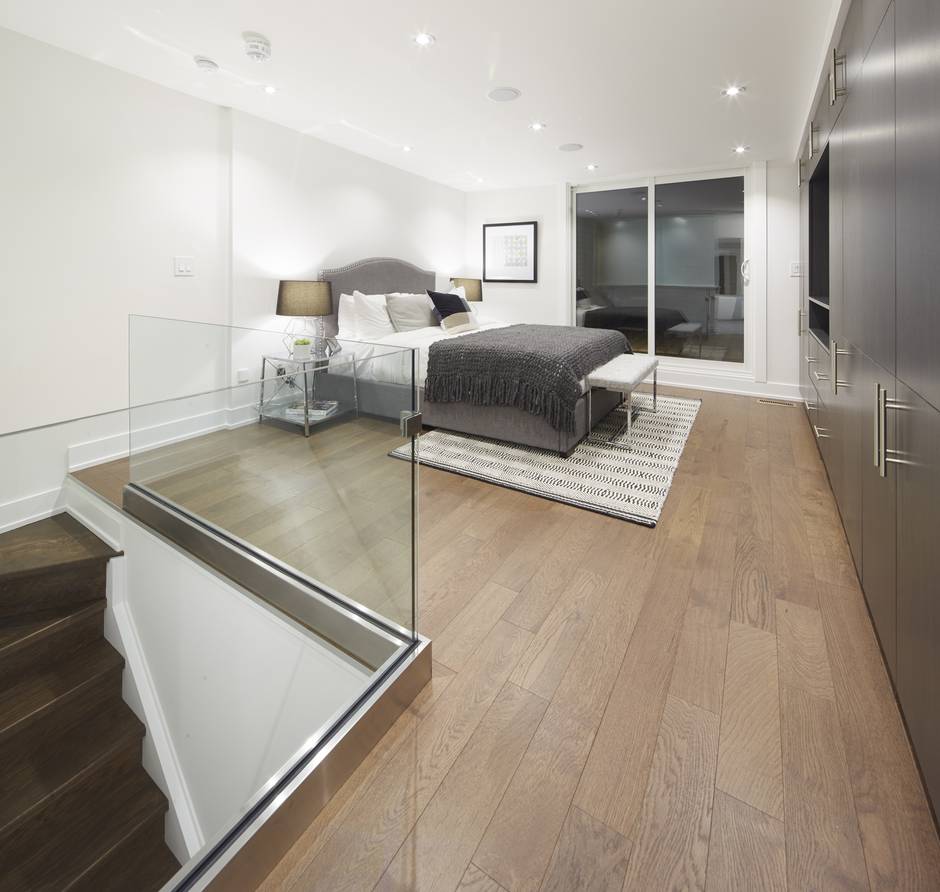 Both Mr. Stein and Mr. Epstein think the third-floor, open-concept master suite is the best room in the house.

“I couldn’t cut any corners on the third floor cause if you’re going to walk all the way up there you better be wowed,” Mr. Stein said.

The space features a wall of built-in wardrobes, a master bath with radiant flooring and westward walk-out deck.

“Whoever buys this house has obviously worked hard to buy it,” Mr. Epstein said. “So that space really allows them to enjoy their home.” 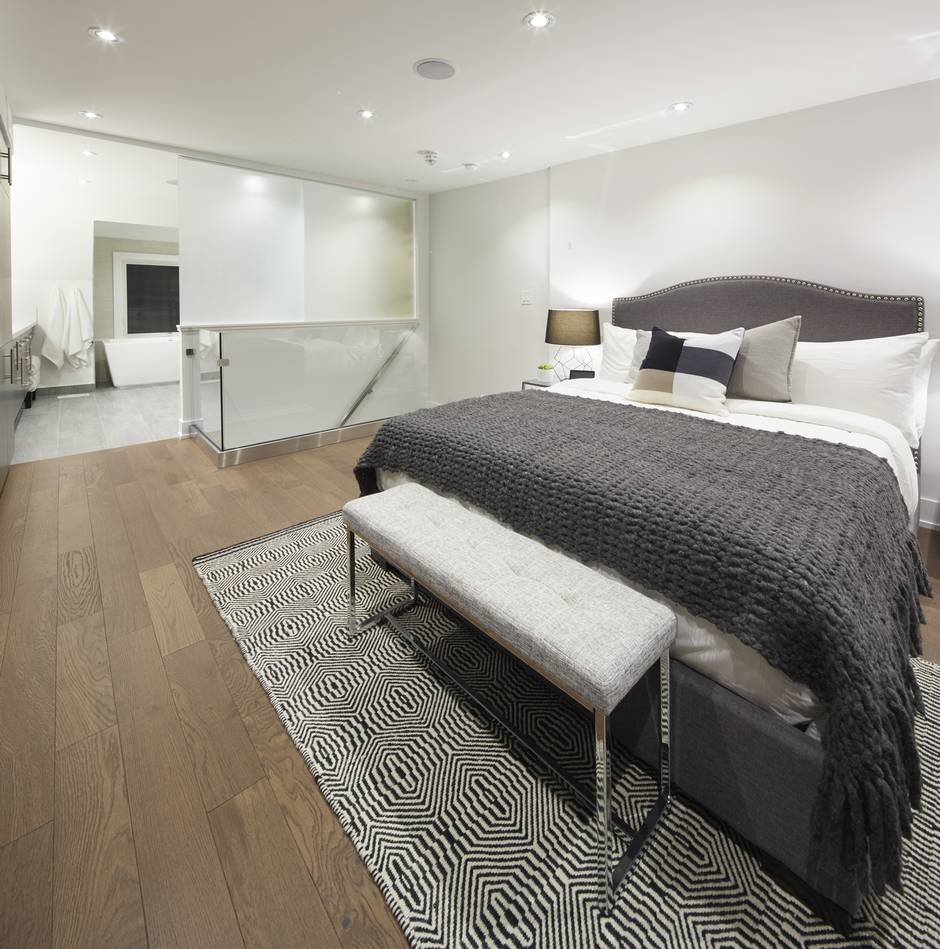 The other detail Mr. Stein is particularly proud of is the smart home capability, run through a Control4 automation system.

“[The automation system] could be integrated with your HVAC system, your security system, the music system, all of the lighting, certain appliances and your fireplace,” he said. “Plus it makes life easier and everyone loves to have people come over and be able to hand them an iPad or a smartphone and show off the cool features of a house.”

Despite having nearly a decade of experience with other construction management companies, this is Mr. Stein’s first major residential project of his own and he is proud of the work he and his team have done.

“At the end of the day, when we look at what we bought and now what we’ve built, we did it right,” he said.