It's difficult to imagine that there was once an abused old house at 355 Blythwood Rd., especially since it's surrounded by impressive North Toronto homes.

But that is what Emil Toma, the owner of M.A. Homes, found when he took on the project of rejuvenating the space back in 2011.

"The old house was really run down," said Mr. Toma. "It had a creepy old house look to it."

Blythwood Road is a hilly road. And 355 Blythwood happens to be on the south side of one of its hills. As such, the lot is slanted, which posed a challenge for Mr. Toma and his team. But once he was finished with digging and the foundation, it was smooth sailing and the rest of the home was built within 10 months.

The finished house has a traditional North Toronto front that reveals a chic, contemporary inside. "I wanted to build something with very clean lines," Mr. Toma said. "I didn't want it to be gaudy."

The new home takes up a similar footprint to the original house. The four main bedrooms, each with an ensuite bathroom and walk-in closets, are on the second floor.

While the main floor has the elegant and modern dining/living room space, a family room is adjoined to the expansive kitchen, which is nearly 17 feet by 13 feet.

In the basement, there is a fifth bedroom, a wine cellar, a mirrored exercise room and a massive lounge area, equally suited for a man cave or a children's playroom.

But some of the more impressive elements of 355 Blythwood Rd. are in the details. It's hard not to notice the height of the building, for example. Mr. Toma incorporated vaulted ceilings since he couldn't build a third floor (due to zoning restrictions). When you're standing in the hallway of the second floor, there's 27 feet of space before you hit the skyline.

"The effect of these high ceilings is that it makes you feel like you're living in a larger house," said Harvey Kalles sales representative Adam Weiner. "It really opens the space and makes it airy."

There are also the pale oak floors that run through the main and second floors. They give the house a rustic quality, tying in the cottage-feel that the façade of the home brings to the property.

"This flooring is very friendly for living," Mr. Toma said. "You could be moving furniture or your kids could be playing and you won't even notice any scratches."

Being able to live in this luxury house is important to Mr. Toma, who envisioned it being a home for a young family that appreciates design.

He made a conscious effort to provide continuity through his reincorporation of details in different areas of the house. For example, the marble in the foyer is also featured around the living-room fireplace, and a similar shade of tiles was used for the backsplash of the kitchen.

"All of the details tie in, right down to the colour palette for the house," said Mr. Toma, adding that only three shades of paint were used in the entire structure.

The level of detail that was brought to the inside of the home was also implemented when Mr. Toma built the outdoor space. In order to enjoy the long backyard, which backs onto the ravine, he built a patio space made of interlocking brick that has a gas line for a barbecue. There is also a deck that overlooks the greenery below.

And yet Mr. Toma's favourite place to enjoy the backyard is not out on the deck but inside the master bathroom that overlooks the canopy outside.

"You could be in the master bath, with its big windows, and you won't need curtains," he said. "There is great privacy to the back of the house."

Mr. Weiner agrees that the master suite is an exceptional place in the house. He adds that he appreciates its high ceilings (even inside the walk-in closet) and the Juliet balcony.

Another room that is special to Mr. Toma, though, is the study.

"It's so different from the other rooms with its floor-to-ceiling walnut panelling," he said. "But it doesn't feel so dark."

Part of the reason why it's not dark is because it shares the same high-gloss white cabinetry as the storage units in the kitchen and family room. And even though it has a traditional, almost academic feel to it, the office has some very modern finishes, like its sleek fireplace and globular light fixture.

In that way, it's very much like a microcosm of the entire house: a contemporary take on traditional. 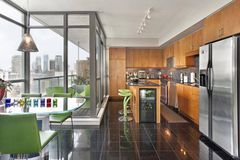 Home of the Week: A sprawling home handles its size well
July 11, 2013 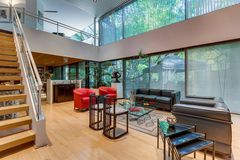 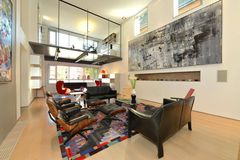