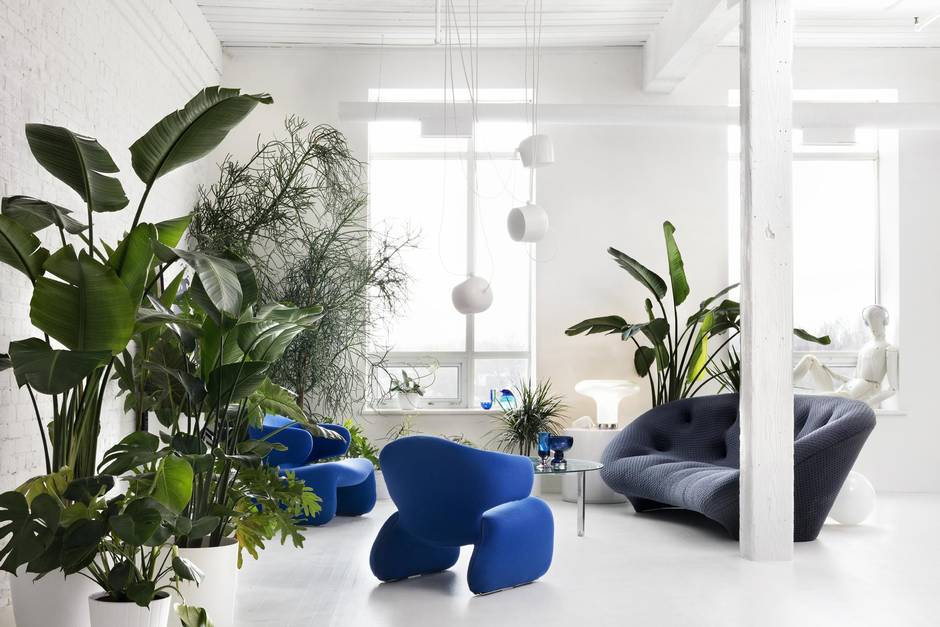 Stephane Chamard and his partner were driving along Queen Street West one day when they passed the Candy Factory Lofts.

The two talked about one day living in the yellow brick building standing on the south-east corner of Queen and Shaw streets.

Mr. Chamard, an architect and designer who moved to Toronto from Paris, was in the midst of transforming their nearby Victorian-era house at the time.

But, after a few years in the neighbourhood, Mr. Chamard was up for a new challenge.

They sold the house and purchased a 1,477-square-foot loft on the fourth floor of the Candy Factory. 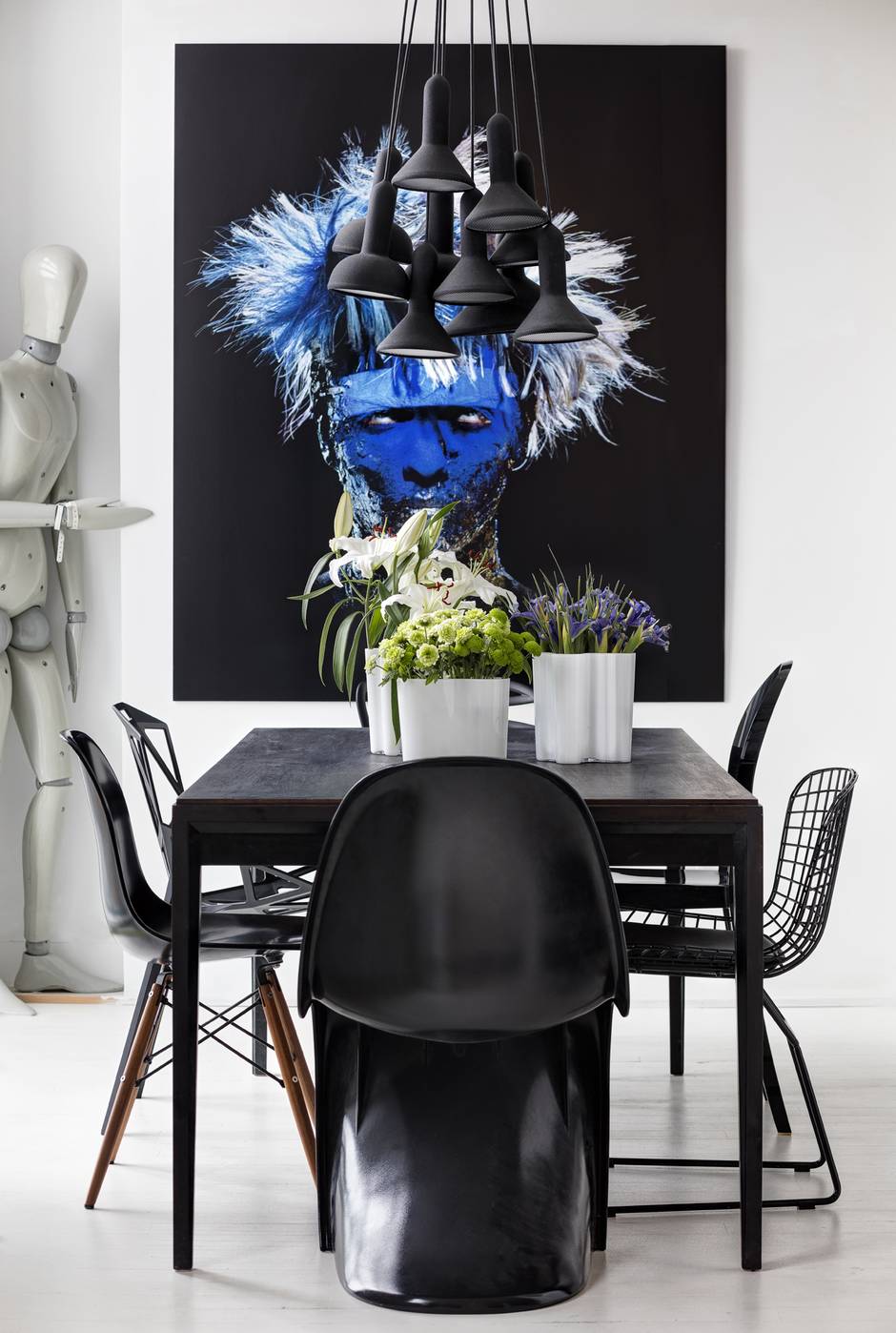 Today the site is held up as one of the most authentic conversions of an industrial building into residential lofts in the city, but the project had a tumultuous beginning, recalls real estate agent Nick Whittington of Brad J. Lamb Realty.

Built in 1907 as a garment factory, the building became home to Ce De Candy Co. in 1963. For years workers there turned out the little rolls of pastel-coloured candies known as Rockets. After the company moved to the suburbs in 1988, the building stood vacant for years.

Along came developer Harry Stinson in the mid-1990s with a plan to convert the building into Tribeca-style lofts. The project struggled to find financing, however, and for a long time people doubted the lofts would be built.

After an acrimonious falling out among the partners, the building’s owners handed over all marketing to Brad Lamb. Mr. Lamb brought Mr. Whittington into the mix, but the early days of selling were a hard slog, he recalls. 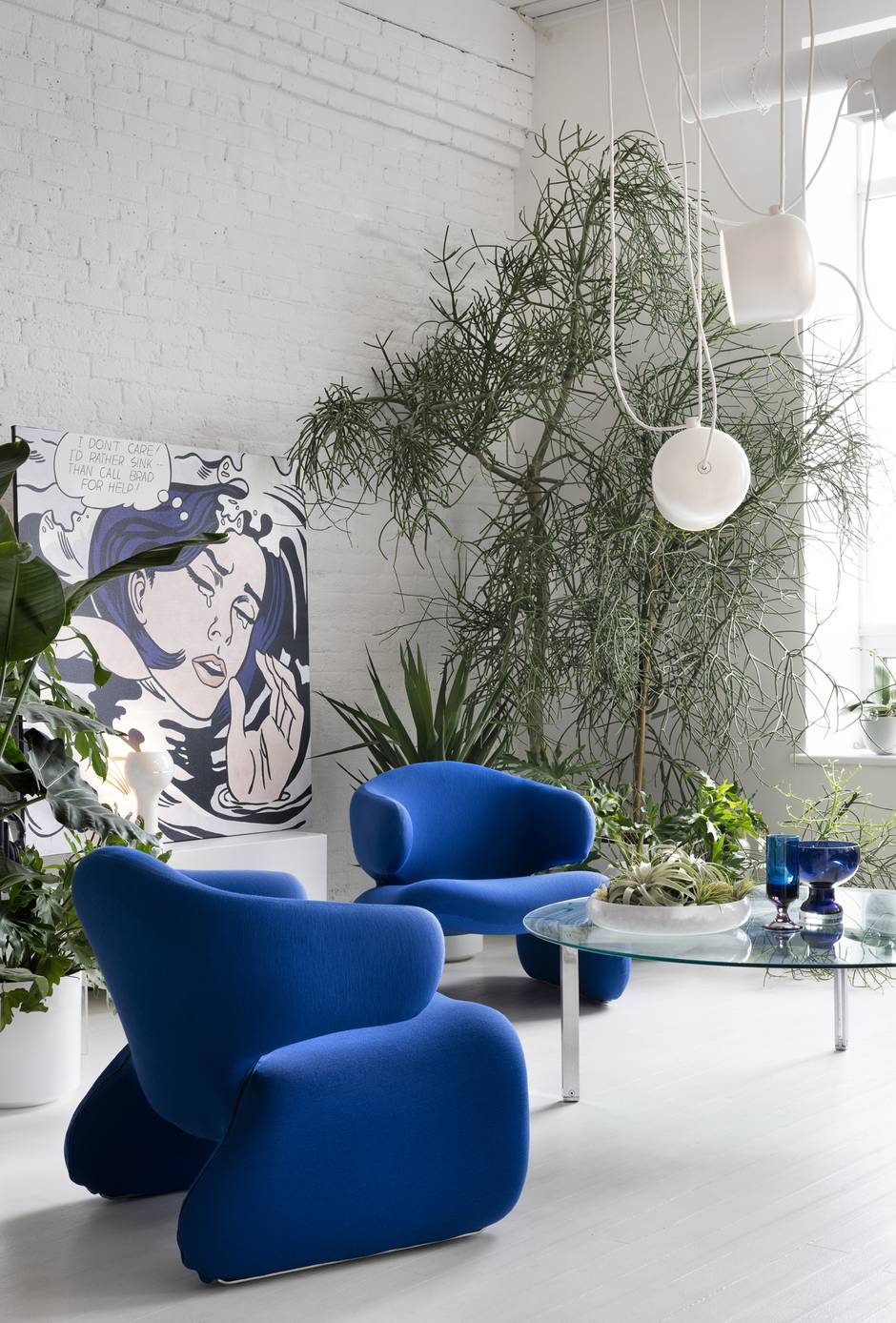 Mr. Chamard says he regards an interior as a canvas. (Lisa Petrole)

Buyers were attracted to the lofts, which embraced the building’s heritage with brick interior walls, exposed pipes and rugged wooden ceilings 13 feet high. Mr. Stinson was a visionary, Mr. Whittington says, but still, many were hesitated to invest.

“This whole area was very dodgy and seedy,” Mr. Whittington says. “That was such a challenge. How do you turn that around and sell it?”

But the Centre for Addiction and Mental Health was right across the street and some of the psychologists and doctors immediately saw the benefit of living so close to the hospital. They purchased penthouses, Mr. Whittington says, and that in turn drew other professionals to the project.

“They loved this area because it was so Bohemian.” 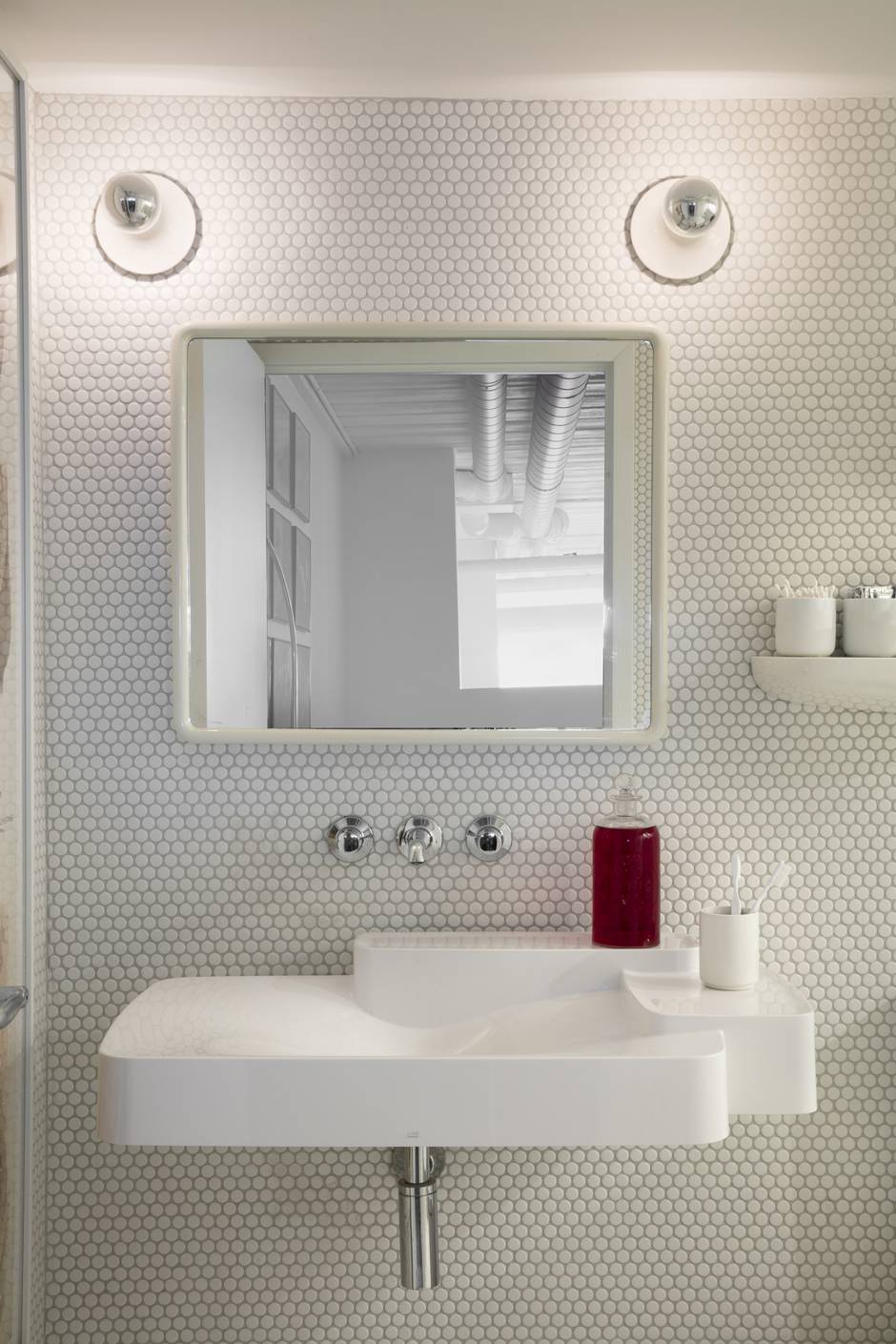 The master bathroom was renovated to appear larger. (Lisa Petrole)

Some of the other pioneers were police officers, Mr. Whittington says. They were drawn to the cool industrial spaces and didn’t worry about living in a gritty neighbourhood. Once it became common to see a couple of police cars parked out front, says the agent, other potential buyers stopped worrying about safety.

That early interest allowed others to see the potential and sales soon were on a roll.

The old CAMH hospital has since been rebuilt with new facilities and better integration into the community. Meanwhile, the Drake Hotel was at the vanguard of an explosion of new bars and restaurants.

“That was the turning point,” Mr. Whittington says.

The agent says the previous owner of unit 418 is filmmaker Sarah Polley’s father. The loft was the backdrop for several scenes in her 2012 documentary, Stories We Tell. 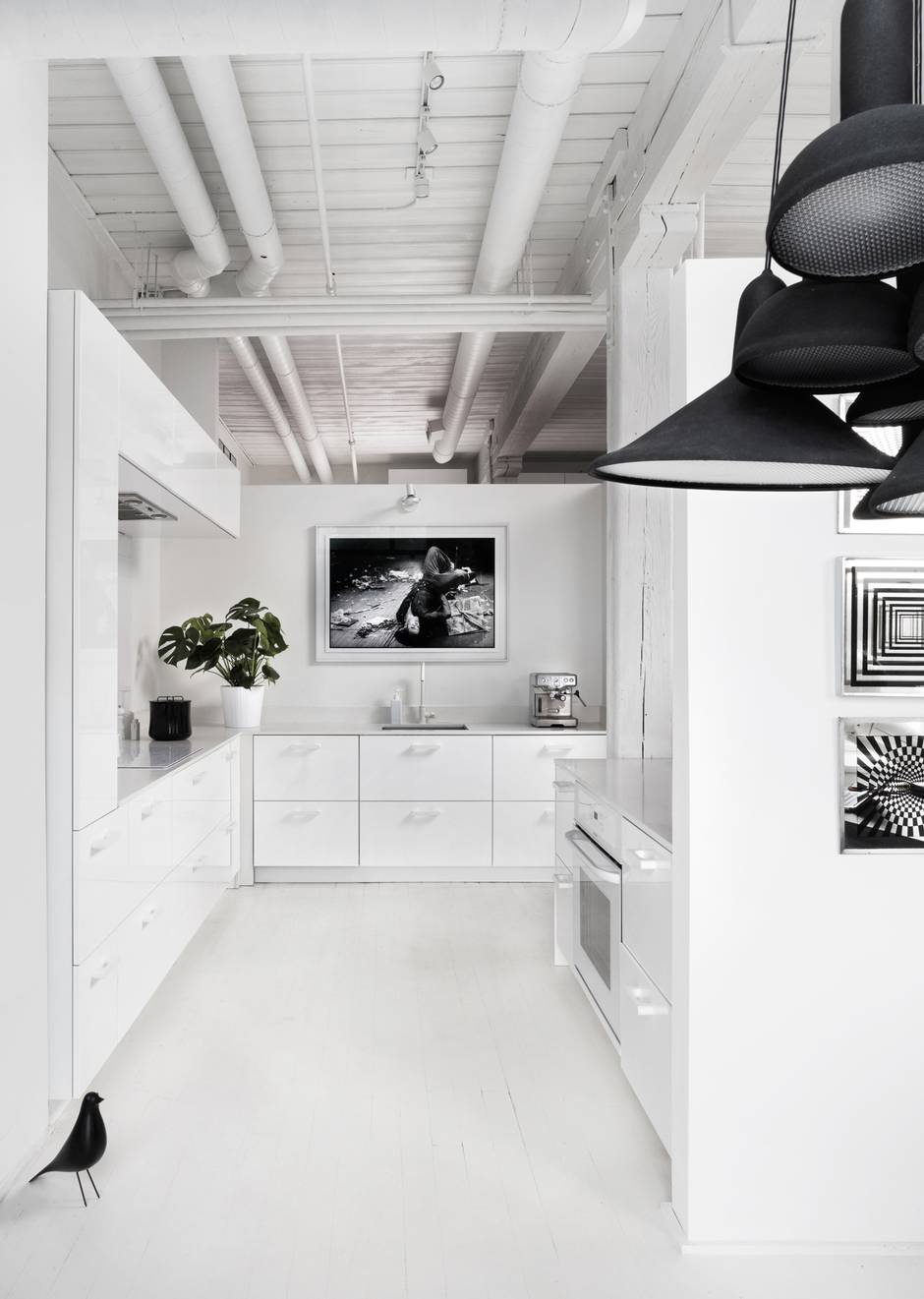 The kitchen was arranged to better hide the appliances. (Lisa Petrole)

Mr. Chamard and his partner purchased the loft in 2013 after stopping in at a weekend open house hosted by Mr. Whittington.

The couple liked the light flooding in and the unit’s open plan layout, but Mr. Chamard didn’t care for all of the wood, which had taken on a more orangey hue with time.

“That was really too much and too present,” he says of the predominance of wood posts, ceiling and floors.

“Everything was as it was at the beginning,” Mr. Chamard says. “There was nothing that we could keep.”

The designer says he regards an interior as a canvas that you can put your personal touch into.

“I had no second thoughts about ripping out everything.” 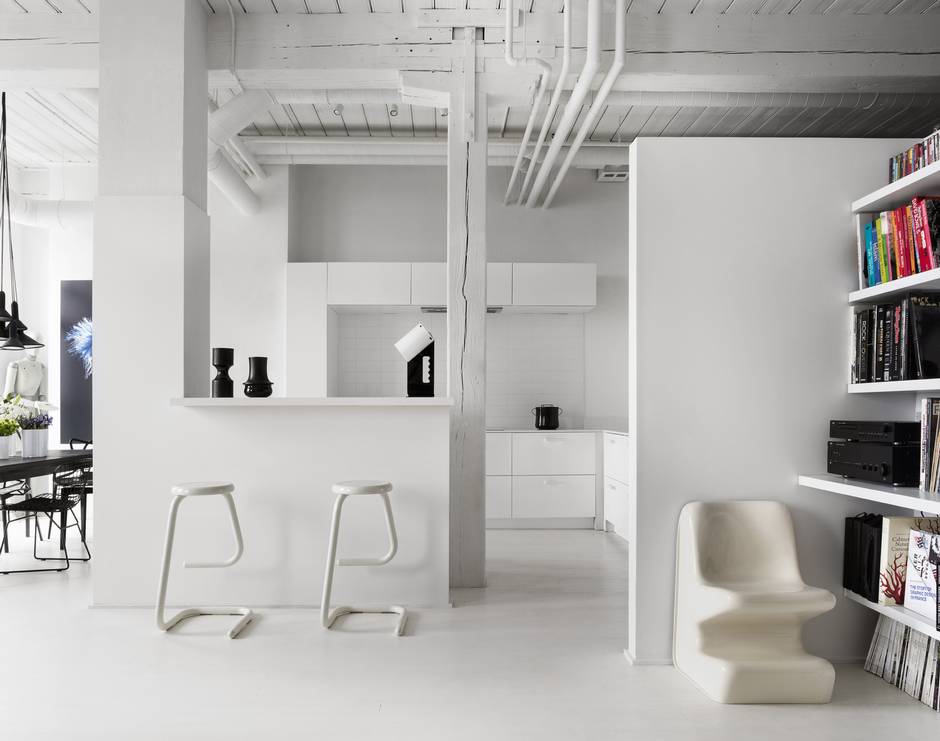 Mr. Chamard raised the partial wall in front of the island so that guests in the living room don’t have their view marred by the aftermath of meal prep in the kitchen. (Lisa Petrole)

Mr. Chamard reconfigured the staircase to the loft-style bedroom so that it’s no longer visible from the living room.

He had the master bathroom gutted and replaced with a glassed-in shower. New, floor-to-ceiling white tiles unify the entire room and make it appear larger.

A guest bathroom was also renovated with new fixtures and finishes. New closets were added in the bedroom and entranceway. 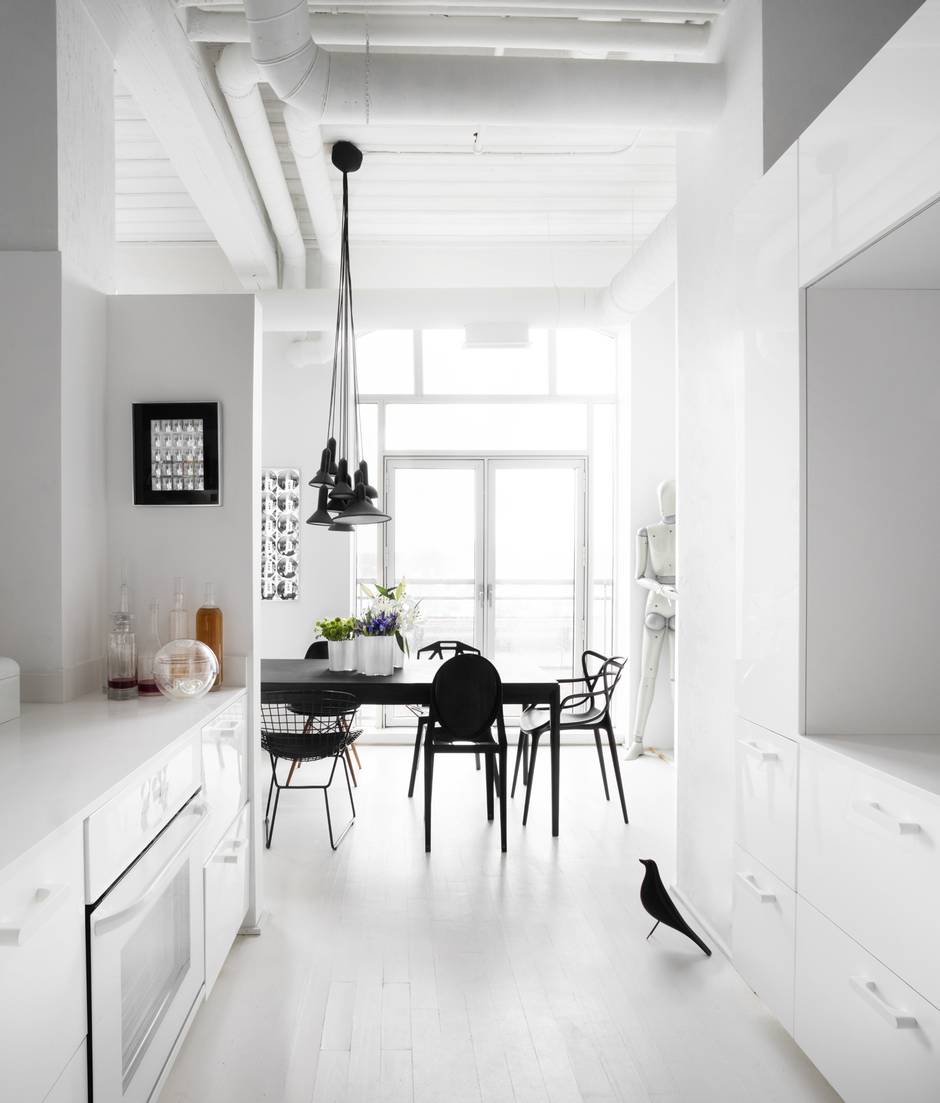 Near the dining area, double doors open to the exterior. (Lisa Petrole)

The kitchen was arranged to better hide the appliances. Mr. Chamard also raised the partial wall in front of the island so that guests in the living room don’t have their view marred by the aftermath of meal prep in the kitchen.

“I didn’t want that it would be seen by others.”

The changes also allowed him to have a much larger work surface.

Throughout the loft, Mr. Chamard had every element painted white – from the timber ceilings to the wide plank floors.

He points to one of the heavy, rough-hewn posts, which is less obtrusive now that it’s painted white but still retains some of the grain. 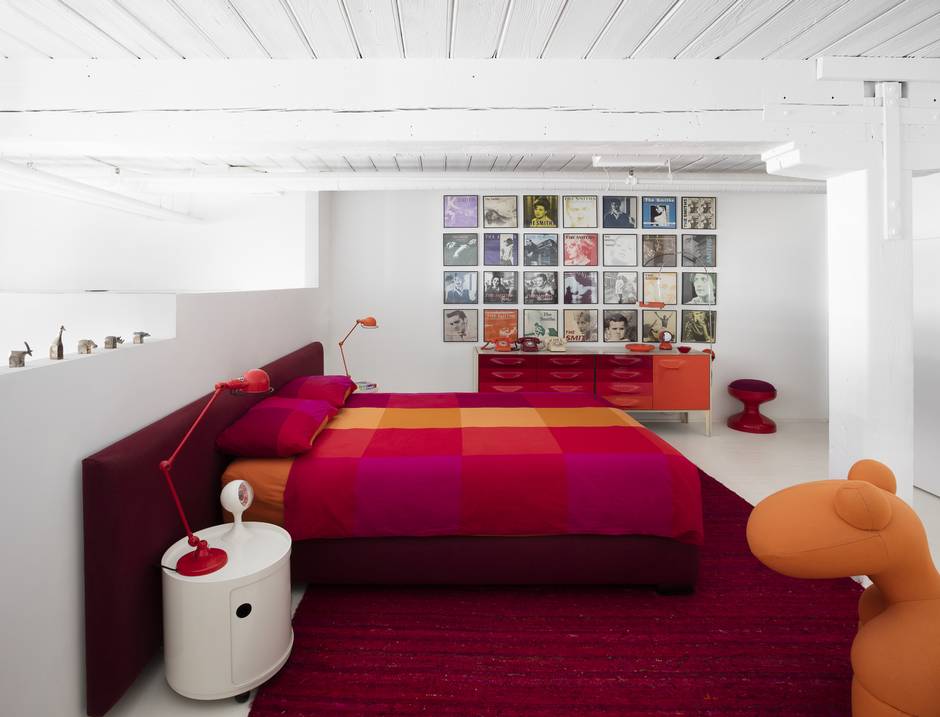 Mr. Chamard reconfigured the staircase to the loft-style bedroom so that it’s no longer visible from the living room. (Lisa Petrole)

“All the texture of the wood appeared,” he says. “Now it looks like a plaster sculpture and that appeals to me too.”

The designer says that the interior now reflects much more light. The white envelope is more sophisticated than wood, brick and metal, he believes, and it provides a clean backdrop for art and furniture.

Because it’s a fourth-floor loft, it’s easy to maintain an all-white space, he adds, because residents are not coming directly from the garden to the interior.

“I love the fact that I can give the key to my guests and say, ‘see you later.’”

The building’s amenities include a gym and an underground parking garage, which houses the parking space that comes with the sale of unit 418. 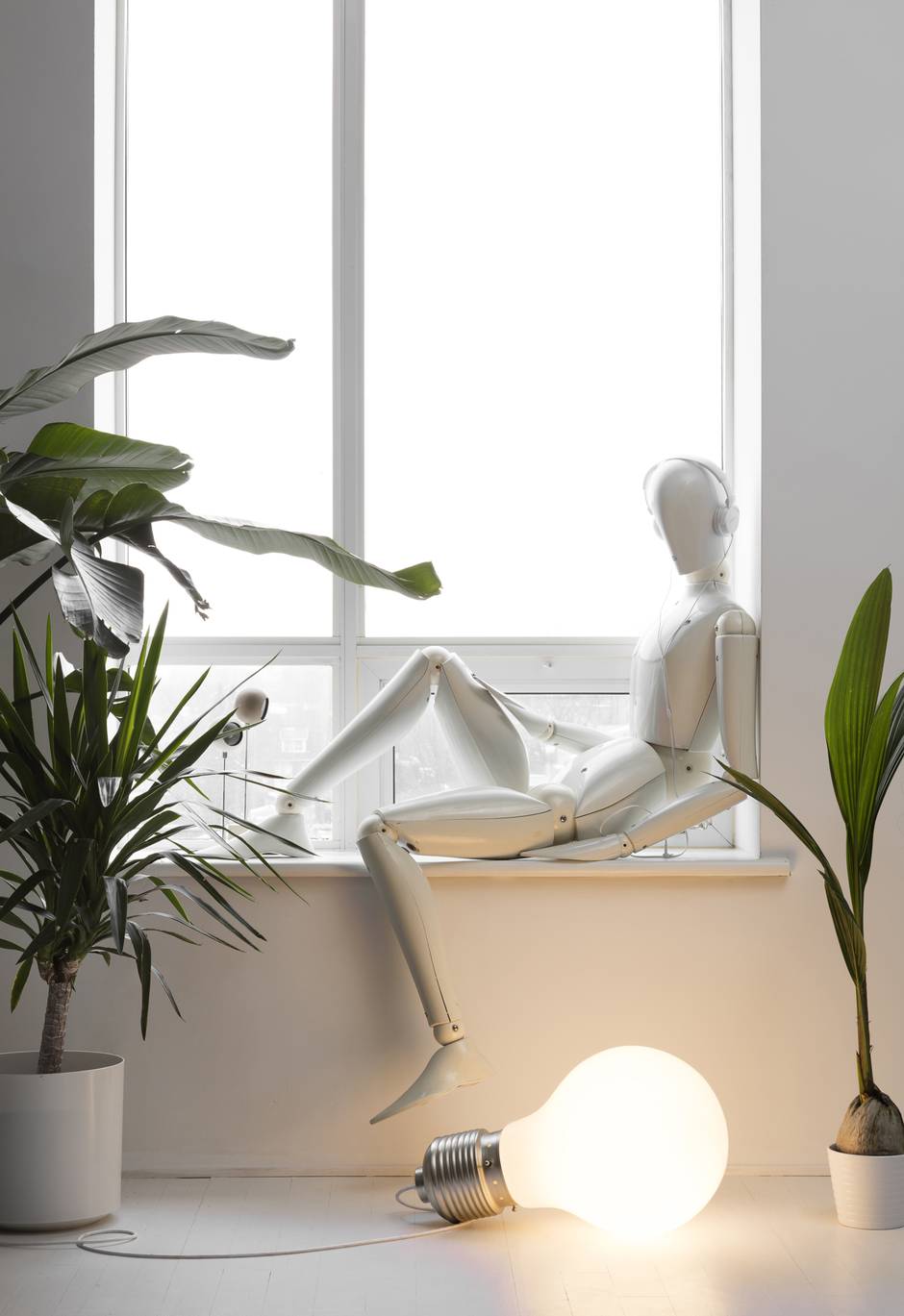 The windows facing Queen St. W. were what convinced Mr. Chamard and his partner to buy the unit. (Lisa Petrole)

The first thing Mr. Chamard and his partner saw when they entered the unit was the row of expansive windows overlooking Queen West.

“What made us buy it was those three windows.”

Near the dining area, double doors open to the exterior.

The windows provide a wonderful view over the neighbourhood’s treetops, the designer says.

When guests come for the evening, Mr. Chamard invites them to arrive just before dusk.

“We have a wonderful sky view at night. The sunsets are absolutely beautiful,” he says. “It makes those three windows look almost like paintings.”