For aspiring home buyers in Toronto who have lost out on one house after another, Aviva Levy and Adam Walman offer some words of encouragement: Hang in there.

"We lost eight bidding wars," says Ms. Levy of the couple's adventures in Riverdale. "We're now there and we're really happy." Last year at this time the pair was mired in despair.

"We were rookies," says Ms. Levy of their introduction to multiple offers. At first they thought that offering the full asking price might be enough to beat their rivals.

After a few bidding skirmishes, they were so discouraged that they approached the landlord of the house they had rented and offered to buy it from him. They left notes on the doors of houses they liked, asking homeowners if they would like to sell.

They tried a few bully offers on properties that were actually on the market. That tactic didn't get them a house either.

Mr. Walman, who is a commercial real estate agent, tried his hand on the residential side and presented offers himself. He did his best to persuade the sellers that the couple would make great custodians of a well-loved home.

Ms. Levy told her husband she was going to fire him and hire another agent after one particularly disappointing loss.

"I think I put a lot of pressure on him," she now says ruefully.

Part of their dissatisfaction stemmed from the fact that they kept shelling out money for home inspections and still ending up without a house.

Finally, in the ninth round of competition, they prevailed over eight other bidders and signed the deal on a detached house on Woodycrest.

Nobody could believe it – including the home inspector and employees at the local bank branch who had commiserated with Ms. Levy every time she returned a certified cheque uncashed.

"I was shocked," says Ms. Levy. "By the end, we were so used to losing, everyone was shocked."

The winning strategy, says Ms. Levy was to go in with no conditions and a healthy chunk above the asking price of $700,000. The couple had their financing preapproved and had done yet another home inspection before the offer date.

In fact, Ms. Levy acknowledges that they may have lucked out sooner if they had been willing to extend their search beyond Riverdale but they badly wanted to live in the neighbourhood along the Danforth. The young couple had gotten to know the area while renting when Ms. Levy was in graduate school, and they liked the parks, amenities and access to transit.

Ms. Levy and Mr. Walman were also intent on buying a detached house with parking. Supply was very limited, laments Ms. Levy, because so many of the houses on Woodycrest and nearby streets are semi-detached.

Where they were willing to compromise was on the size and condition of the property. If they got into the right neighbourhood, they figured, they could improve the house. They began to look in lower price brackets so that they would be able to offer a greater amount above asking.

They bought a house that has a large backyard but a small footprint. Typically people who buy these compact houses put on an addition, Ms. Levy says, and the couple may be able to do that eventually.

Also, they had been living in a rental condo, so they actually have more space now.

"For us, this is a big house for two people," says Ms. Levy. "Compared with our 600-square-foot condo, it feels massive."

Now that they have the house, the couple is finding it takes up a lot of time, says Ms. Levy. They also faced some unexpected expenses. A tree fell on the house not long after they moved in, which resulted in a big insurance claim. Then they found out their fence is encroaching on a neighbour's property.

Mr. Walman is taking courses on plumbing and electrical repair at George Brown College so that they can save some money when things break down.

But they're very pleased they made the move.

Joan Watkins, a real estate agent with Right at Home Realty Inc., says some pockets in the east end of Toronto are very hot right now, including streets near near Greenwood and the Danforth.

Ms. Watkins says the location of the house – just one block from the Bloor-Danforth subway line and with a walk score of 92 – appealed to the buyers in this case.

"When the buyers bought it, they couldn't get close enough to the subway."

Ms. Watkins, who has been selling real estate for 32 years, says micro-hoods tend to swing in and out of favour.

For a while, Monarch Park Avenue and the surrounding area lost some buyers to Leslieville, which for a time gained a reputation as a place to find an affordable house in the east end, Ms. Watkins says.

Now values in Leslieville have swelled and buyers have a renewed interest in being close to the subway at Greenwood and the Danforth.

At one time, she adds, house hunters might have considered Monarch Park Avenue a busy street but in this case, after one day on the market, the sellers were resisting a bully offer.

"That seems to have changed," she says of the willingness to live in a bustling area.

Courtesy of Kristyn Wong-Tam, a free Victorian home – with one little catch
April 1, 2014 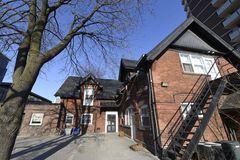 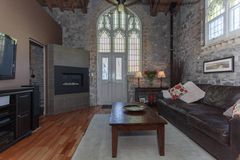 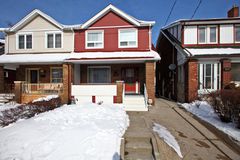