For years, the residents of Yarmouth Road in the upper-middle class Toronto enclave of Seaton Village knew that the actress Meghan Markle lived in the wine-coloured house on their street. No big deal, it is an area with a reasonable number of mid-tier famous people to bump into at the dog park.

Then she started dating the last eligible bachelor of the British Royal family, Prince Harry, and became one of the most famous Meghans in the world. Neighbours clucked as security vehicles and paparazzo tail-cars would camp out in the neighbourhood's laneways.

"People were getting super irritated with the paparazzi,  not because of idling cars, because they felt she deserved privacy," says Jennifer Hunter, head of the Seaton Village Residents Association. She says the neighbourhood's Facebook page has been  overflowing with  Meghan and Harry stories. One tale -- one she can't confirm but locals swear is true --  is that the Royal couple was spotted dressed up in costume on Halloween, 2016, as they toured the Village's haunted decorations (some neighbours apparently get very into the season).

And now, 10 Yarmouth Rd., where Meghan and Harry spent time before they were officially engaged, is for sale, with an opening price of $1,395,000 and every expectation of a bidding war pushing the final number several hundreds of thousands of dollars higher.

It's not actually Ms. Markle's house. She was renting, and she has moved out some weeks ago. Sadly, there will be no Princes at the open house this weekend.

"It's special because it's a detached with a detached garage in a family neighbourhood," says Alex Beauregard, a sales associate with Freeman Real Estate Brokerage who lives in Seaton Village. He says he does not expect its most recent tenant will add a 'Princess Premium,' - the neighbourhood doesn't need one. Just a week ago a complete fixer-upper on nearby Kendal Ave. sold for $600,000 above asking.

The sellers, Kevin O'Neill and Elizabeth Cabral (a former fashion director at Flare magazine, now based in New York), bought the three-bedroom, two-bath house for $508,000 in 2007, and have reportedly rented it out for several years now. Ms. Cabral, reached by phone, did not wish to comment on any previous tenants or on the sale. It's a single family home, not set up for apartments or an income suite.

Daniel Freeman, broker with Freeman Real Estate, the company listing the house, says the listing went up Thursday night and is already drawing a lot of interest: again, not from people who have any Royal fascination. He warns potential looky-loos that his agency has a standard practice of checking for photo ID at the door.

"There are no traces of royalty in the house, except that it's a very fine residence... she had good taste," says Mr. Freeman. "It was private and had lovely amenities. Seaton Village is a haven of safety family, inclusiveness and community."

Still, he admits that when you walk into one of the designer baths: "It's a nice thought to think, wow, Prince Harry used this toilet." 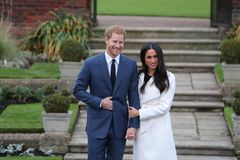 Prince Harry and Meghan Markle delight crowds in first official engagement Subscriber content
December 1, 2017
Follow Shane Dingman on Twitter @shanedingman
Report an error Editorial code of conduct
Due to technical reasons, we have temporarily removed commenting from our articles. We hope to have this fixed soon. Thank you for your patience. If you are looking to give feedback on our new site, please send it along to feedback@globeandmail.com. If you want to write a letter to the editor, please forward to letters@globeandmail.com.
Comments