Living in a city with a hot real estate market is great for your retirement.

So, tough luck to the baby boomer residents of Fredericton, Lethbridge, Alta., and other smaller communities with quiet or weak real estate markets. There's not much of a retirement windfall waiting for you in the years ahead when you sell and downsize.

Income inequity in Canada has been growing, but it hasn't become a big issue because it's hidden. We may see people living large, but we don't know if it's because they're getting richer or just using their lines of credit. But there's a manifestation of income inequity that may be more tangible – real estate.

There's a generational angle to this – the young adults of Generation Y may have lower rates of home ownership than previous generations because of rising house prices. And, there's the geographical angle. You're golden in the housing markets of Vancouver, Toronto and some other cities, and out of luck in Fredericton.

This distinction between local real estate markets was hammered home for me in a recent e-mail from Adrian Mastracci, a financial adviser who marvels at the real estate craziness in his home city of Vancouver.

Mr. Mastracci started by noting a 25.8 per cent year-over-year price increase in May to $2.9-million for Vancouver west side detached homes. "On the plus side," he continued, "some clients are downsizing to a smaller home in the area and putting serious cash in their pockets. Sure helps retirement prospects."

Vancouver's smoking hot, but Vancouver Island (Victoria excluded) is not. Prices on the island rose close to 9 per cent from May, 2009, to May, 2015 – that's respectable, but almost a joke in comparison with the wealth being generated in the Vancouver market.

A milder but still significant disparity can be found in comparing prices in Calgary and Lethbridge. Growth in Calgary house prices has been set back to some extent by the decline in oil prices, but the increase from May, 2009, to May, 2015, still came in at 22 per cent. For Lethbridge, the comparable total was 10.9 per cent.

Soaring home values are really just trivia until it's time to sell and downsize. At that point, you find out how much of your equity you'll be able to hang on to after moving to your next home. If you buy a condo or a smaller house, you may well find out that you have a little money left over, but not enough to add serious bulk to your retirement savings.

You'll do a lot better if you live in a detached house in Toronto, a commodity so sought after that the average price, year over year, rose 18.2 per cent in May to $1.15-million. The average condo price in the city was $422,947 during the month. Double that and you still end up pocketing close to a quarter of a million dollars after downsizing. Yes, that includes a real estate commission on selling the home.

Now back to Fredericton. A Royal LePage price survey for the first quarter of 2015 found an average condo price of $154,000. Sell a house in the city at the May, 2015, average price of $179,674 and, after buying a condo, you're left with barely enough money for a cheap new car. A better use of the money would be to put it in an emergency fund in case of a major special assessment at the condo to cover unforeseen repairs.

Curious how big a factor your house will be in your financial planning for retirement? Get an idea of what it's worth, and then price out the sort of condo or small house you'd consider living in next. The difference, minus real estate and moving fees, is what you'll be able to add to your retirement savings.

Mr. Mastracci said he has four high-net-worth clients who were left with upward of $800,000 after selling large homes in Vancouver and buying smaller properties in the same part of town. "It makes a big difference when you can put that kind of money into your retirement," he said. "If you want a bigger income, you just add that money to the pile."

That's why living in a city with a hot real estate market is great for your retirement. 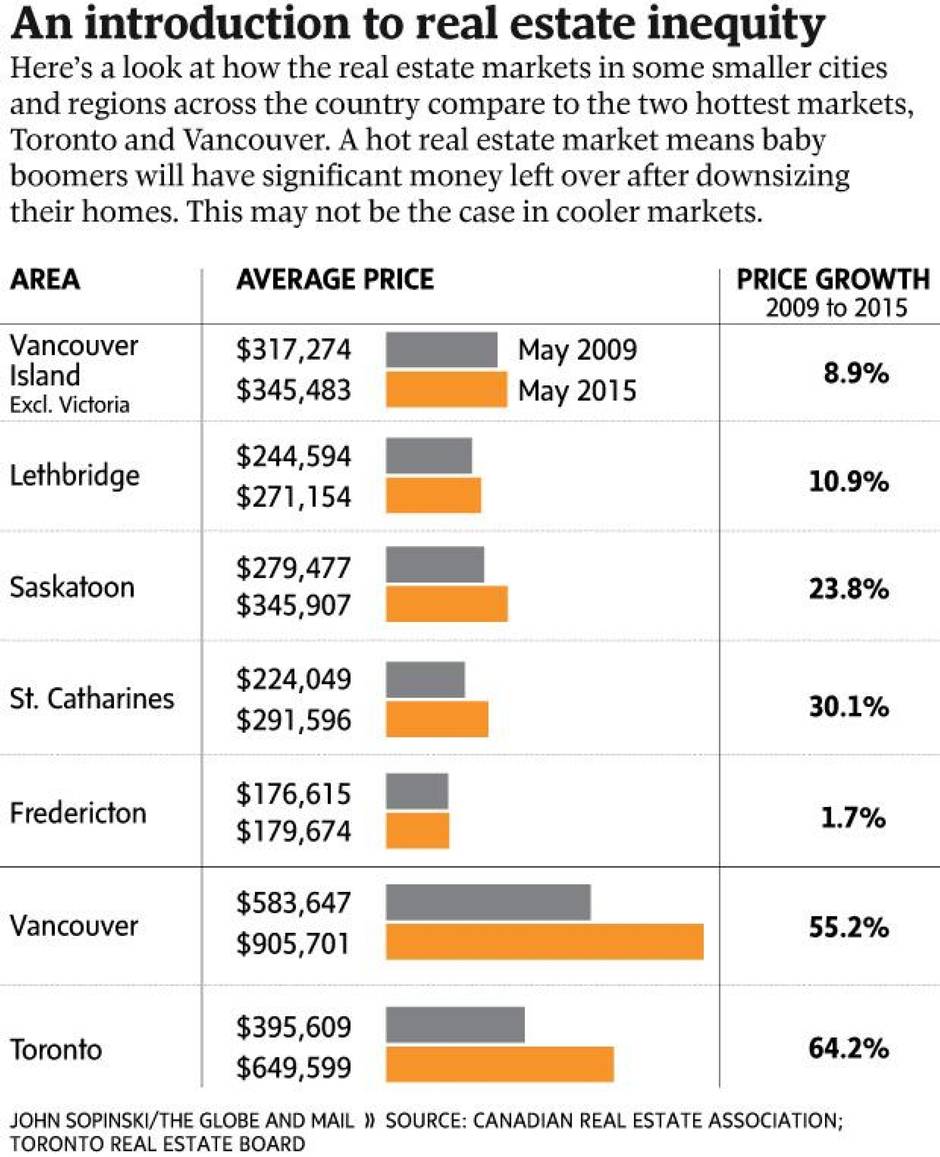