Toronto's Wychwood Park is an enchanted place in an otherwise disenchanted urban landscape. Laid out in the late 19th century as a villa enclave by the painter Marmaduke Matthews, the park has long been home to affluent, literate folk drawn by its spacious Edwardian family homes and by the ancient forest in which they stand.

These people tend to stay put for generations, giving the park a sense of well-rooted community rare in downtown Toronto.

But deep roots can produce strange flowers, and so they have in Wychwood Park, in the form of suspicions about ideas and people coming from outside the magic circle. It was this shadow-side of the park's loveliness that Toronto architect Ian MacDonald encountered when he bought an insignificant fifties bungalow there and proposed to build a modern house for himself and his family on the site. Some neighbours were outraged at such an audacious departure from the Arts-and-Crafts Englishry of the park's early houses.

As it turned out, the neighbours had little to fear. Mr. MacDonald's deeply personal modernism has none of the popular, mass-produced look of something by, say, California designers Ray and Charles Eames. Instead, the architect has kept his gestures spare, direct, elegant. He has also taken design cues from the ravine topography of Wychwood Park, cladding his house in dark stucco and wood to make it sink into the foliage under the forest canopy, pulling it back into the side of the ravine the house steps down.

The building was constructed under stringent conditions laid down by city officials. The area of the project's above-ground component could not exceed the 1,100-square-foot base of the bungalow or the height of the old structure. But the architect needed 4,000 square feet to provide space for his family, a workshop and a zone that could some day be turned into an architectural studio. His solution involved digging deep into the hillside. The result is a 2,600-square-foot house on two principal levels, and a basement about 1,500 square feet in area.

Because he had to work within these highly limited parameters, Mr. MacDonald crafted each part of the house, down to the smallest detail, to work like a piece of a Chinese puzzle. A slab of Brazilian cherry wood on rolling feet slides out of a slot in the kitchen to become the table in the dining and living room. A nook upstairs is turned into a guest room by pulling out a divider hidden in the wall.

Nothing is ordinary. Mr. MacDonald had to introduce a strong support into the living room to hold up the second level, for instance, and took this necessity as an occasion to make modern art: The steel pillar looks like a mechanical element that escaped from a locomotive engine and got recycled through a Greek temple. It works entirely well in this house, which is both modern and classical in its geometry and feel. So it goes throughout the house: thing fits exactly with thing, views open and shut with cinematic crispness, every transition - from interior space to the exterior gardens, within the house itself - is precisely calibrated.

But this precision, while never finicky, comes with a price. Everything has been cobbled, like a fine designer shoe made to fit only one foot in all the world superbly well. To this outsider, for example, the concrete steps into the ample basement were too steep and narrow, the window behind the kitchen too tall, the banister-free stairs vertiginous. This house also dictates exactly what should and should not be in it: The four reproduction Petite Chairs and the chaise lounge by Le Corbusier strike the right modernist tone in the living room, but it would be hard to imagine one additional stick of furniture trying to take up residence there.

This dwelling's true success and beauty lie in its status as environmental artwork. The building's dug-in situation could have produced a bunker-like atmosphere in the place. Instead, Mr. MacDonald has created a continually shifting, sliding series of relationships with the nature that surrounds the house, brightening the interior and making every window a moment of gentle surprise.

Yearning for a renewed, revitalized relationship between humankind and nature has always been at the heart of the modernist enterprise. Ian MacDonald's project in Wychwood Park reveals this desire at work in the material stuff of architecture - shaping sight lines with great care, quietly breaking down barriers, demonstrating how the art of building can give us those most precious gifts, new ways of seeing.

Each part works like a piece of a Chinese puzzle
Gallery
August 27, 2009 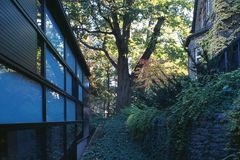