Peter Freed, the pioneer developer behind a string of popular King West condominiums, is now planting the flag in midtown Toronto with a plan to develop a series of contemporary high-rises in the Yonge-Eglinton corridor.

The first of four projects – 155 Redpath, at Roehampton Avenue just east of Yonge Street – will be released by Freed Development Corp. and CD Capital next month.

"What makes this different is the fact it's not in the middle of a busy road, but set right in the middle of an existing residential neighbourhood," says Todd Cowan, who is a managing partner of CD Capital. "This building is in one of the most prime areas going forward."

The 36-storey residence will be a short walk from shops, cinemas, cafés, restaurants and recreation facilities, as well as a subway station and the light rail transit line running along Eglinton Avenue and scheduled for completion by 2020.

"We feel Yonge and Eglinton is going to become the centre of the city," Mr. Cowan says.

"It will be one of the only locations in the city where you can … be downtown in 15 minutes or the airport in 40 minutes."

Peter Clewes of architects Alliance and designer Johnson Chou will also anchor this 470-unit tower in the community with strong visual designs.

"A lot of the buildings have been there for a long time, dating back to the seventies," Mr. Cowan explains. "And a lot of the new buildings built in the last 10 to 15 years are typical residential buildings, nothing very contemporary."

This building's articulated shape will give the illusion of stacked boxes shifted inward and outward and allow for a great number of wide and shallow suites.

"All principal bedrooms will be along the exterior glass and the units will have a lot of natural light because … the floor plate of the building is more rectangular and less square in comparison to similar type buildings," Mr. Cowan states.

"A lot of the units will have large balconies or wraparound balconies, or in many cases they'll have balconies on two sides, so that's a really unique feature of this design. And some areas on top of the podium level will have very large outdoor terraces as well."

Sunlight will also flood common areas, including a grand lobby, library, party and fitness rooms with walkouts to private gardens, including one with a reflecting pool and fire pit.

On the ninth floor, there will be an outdoor infinity pool, hot tub, cabanas, lounging, barbecuing and dining areas.

"Our plan is to bring something more contemporary and lifestyle oriented," says Mr. Cowan.

"We have a much larger site than a typical condo site, so it give us the luxury of grading a very large open area for the residents of this building and … a more exclusive area on the roof of the podium level."

Parking will cost $47,500, while lockers requests are put on a wait list. Monthly fees will be 49 cents per square foot, plus individually metered utilities.

Occupancy is slated for fall 2017.

On Site: Infill town homes offer an elegant entry to Forest Hill
May 9, 2013 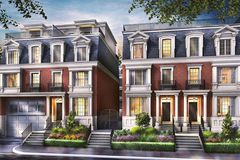 On Site: Builder serves up Kitchener condos with a Hogtown feel
May 9, 2013 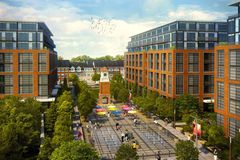 On Site: ‘Soft’ opening of Toronto condo already has half the units sold
May 2, 2013 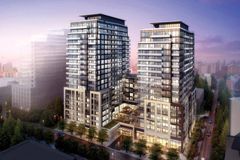