The development team that gathered accolades for the tall and curvy silhouettes of the so-called Marilyn Monroe towers in Mississauga will make their next mark with a shorter and more angular outline in one of Toronto's oldest communities.

Cityzen Development Group says construction will begin later this month on the project at a former Greyhound bus terminal at Front and Sherbourne Streets, east of the St. Lawrence Market. Peter Clewes, principal of architectsAlliance, heads the design team for 158 Front, a 14-storey, black brick podium topped with a pair of stacked and shifted, white-framed boxes rising another 26 storeys.

"ArchitectsAlliance is a very creative shop and Peter is always at the leading edge of architecture in the city," Cityzen president Sam Crignano says. "This respects the heritage buildings that are there and will fit right in and not stand out as tall glass towers." Citizen is developing the site along with Fernbrook Homes.

Young professionals and families alike are curious about the 492-unit condominium development, which is one of few in the historic district home to bistros, theatres, parks and recreation centres. Also nearby is Sugar Beach, Sherbourne Common, the financial and entertainment districts, health-care facilities and transit modes, such as Billy Bishop airport.

"We have registered almost 4,000 people and we haven't seen this kind of response from our advertising or signage in a long time, so clearly there is a local interest from end users," says Mr. Crignano, who also lives and works in the area.

"It's a neighbourhood with multiuse. In addition to residential uses, you have retail, offices and a number of schools – there's George Brown and Ryerson up the street and U of T around the corner – so it has this broad market appeal."

The urban setting also dictates things be done differently, such as allowing the architectural firm to devise exterior and interior designs. "We hadn't found a good opportunity for it until now," Mr. Crignano says. "This way [Mr. Clewes] can take what his vision is of the exterior and bring it inside as well."

For instance, 19,000 square feet of indoor and outdoor amenity space will be arranged over 10 floors with a staircase connecting everything from games, meeting and cooking rooms to a double-height lounge, library, theatre and gym.

"Usually we have amenities scattered all over the building, but given the width of this podium, we were able to consolidate them all … in the centre of this tower and connected via the stairwell, so that's really unique," Mr. Crignano notes. "And atop it all is this swimming pool and outdoor kitchens, it's pretty unique."

Furthermore, some facilities will offer fitness programs run by Mark Stables of Benchmark. "It's something relatively new we're starting now," says Mr. Crignano, who believes these services can increase traffic to well-utilized areas, such as the gym in his own building.

"Occasionally we have classes, but it lacks programming that Mark Stables and Benchmark will provide."

As for suite designs, the building's shape will increase the number of corner units. "We have 12 corners, so it's unique from that standpoint," adds Mr. Crignano, who also cites several wide and shallow plans with windows in more rooms.

"A lot of those places, we have two bedrooms and two baths and they're just shy of 700 square feet, which is … very unique and very affordable."

Occupancy is slated for fall/winter of 2019. 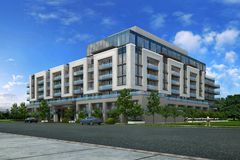 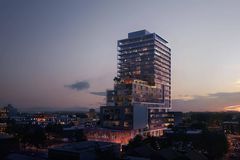 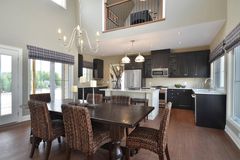