Brent Crawford, a real estate agent with Re/Max Hallmark Realty Ltd., represented the sellers. He wasn't surprised at the action, he says, after more than 100 people swarmed through the weekend open house.

"I was expecting a lot of offers," Mr. Crawford says.

The house needs a complete renovation, he says, but its location in a coveted school district drew a lot of potential buyers.

He also thinks the timing was excellent because lots of prospective buyers are out looking at the very few listings available.

Those competing bidders may be surprised to learn that Tuesday was the day marked as the cheapest of the year for buying a house in Toronto.

Real estate brokerage TheRedPin.com narrowed down the cheapest day of the year to buy a house to the third Tuesday in January.

The first month of the year tends to offer lower asking prices, says TheRedPin.com, and potential buyers are often preoccupied with paying off their December spending binges.

Their research shows that, from 2010 to 2014, home prices averaged $22,338 less in January than the second most reasonable month, which is July.

Those months tend to be quieter with fewer listings, but also less competition among buyers.

Rokham Fard, co-founder of TheRedPin.com, says a buyer's market tends to pop up in January for a short time.

"There might be less inventory, but sellers at this time are generally highly motivated," Mr. Fard said.

Mr. Fard says sellers who list a house in January generally do so out of necessity. Given a choice, they would wait. That means buyers have more leverage.

In some cases, a house still on the market in January has been sitting for a while. That may mean the asking price is too high, which in turn means buyers might have more success with a lowball offer.

Mr. Fard acknowledges that most people can't just jump into the market and make an impulse purchase because they think they're getting a good deal.

"Obviously, buying a house is not like buying a sweater," he said.

But he thinks that buyers who believe they have to wait for more opportunities in the spring should consider having a look around now.

Real estate agent Geoffrey Grace of ReMax Hallmark Realty Ltd. has also crunched some of the numbers from the Toronto Real Estate Board's sales statistics. He looked back several years and found that, each year, prices rose between January and May. The average gain for that timespan was 11.5 per cent, but it varies: In 2011, it was 14 per cent.

Mr. Grace says that if the trend holds this year, a buyer could end up paying approximately $107,000 more in May for the average detached house in the 416 compared with the average price at the end of December.

Mr. Grace says he meets lots of people at this time of year who tell him they are planning to purchase a house. Often they say, "we're looking to buy in the spring."

When he delves a little deeper to find out why they're delaying the purchase, he finds that they've often just made the decision to buy. Perhaps they're still feeling nervous about all that buying a home entails. In other cases, potential buyers feel there's not enough on the market right now and they want to wait until they have more options. And a third reason is that they're trying to save up a larger down payment.

Some buyers seem to have a good grasp of this phenonemon already.

Mr. Grace recently had a condo unit sell in the $1-million-range after more than a month of back-and-forth with the buyer. A few other bargain-hunters had also stepped up with offers, but they were too far off to consider, he adds.

One owner of a one-bedroom condo unit in Liberty Village approached him late last year with a plan to sell in early 2015. When Mr. Grace checked the MLS in early January, he was discouraged to see there were five new listings of similar units in the $370,000-range. All had the typical arrangement of one bedroom and two bathrooms plus a den.

But since that time, three of the five units have sold.

In another case, a house on Gerrard Street had lots of showings in December but didn't sell. As Christmas approached, Mr. Grace and the seller agreed to take it off the market with a plan to list again when the spring market gets under way.

"I think it was starting to wear on them," he said of the pressure of keeping the house ready for showings at all times. "It can annoy a seller to have too many people come through."

Mr. Grace says the property took a little longer to sell because it was a nicely renovated house – with an asking price near the $1-million mark – on a busy street.

In January, Mr. Grace got a call from someone who saw the house in December and decided to make an offer. The deal came together and the house is now sold.

Mr. Crawford, who sold the house on Blantyre, thinks the winter months are an excellent time to sell because there is so much pent-up demand from buyers. He calls it "the Canada effect." People with cabin fever look around the living room and decide they need a bigger house.

"In February, a lot of people are flat-out bored," he says.

Real estate is all about supply and demand, he points out, and too many sellers tend to list when their gardens look their best.

"In April and May, the number of listings goes way up." 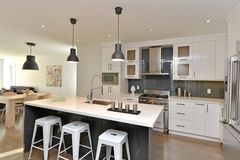