Two Toronto-area startups are betting that a combination of technology, regulatory changes and consumer behaviour have created the conditions necessary to finally bring about a transformation of the country’s traditional real estate model.

Regan McGee, chief executive of startup Nobul (which he describes as a marketplace platform where potential buyers and sellers get bids for service from realtors), says that, in recent years, accumulation of anti-trust and competition regulations in the United States and Canada have pushed the industry to a tipping point. “They created an environment where a company like us could exist. [Before now] it would have been really hard. This is the way everything is going,” he said.

“The industry is changing, and I could feel the change coming,” says Vicki Schmidt, co-founder and broker of record for Justo, a new twist on the online discount brokerage.

These two companies are just a few of the real estate-focused startups popping up or expanding across the country, but they have one thing in common: The market opportunity they sense is to put more negotiating power, and perhaps more cash, in the hands of the real estate buyers and sellers. That could also put pressure on the traditional commission structure and service offering from agents.

Justo’s idea is mainly a tech-enabled update on an old idea: the discount brokerage. Founded by Daphne De Groot, an Israeli immigrant on a startup visa (who has dabbled in real estate developing, reality television and marine biology in an interesting career path) who partnered with Ms. Schmidt to try to build something more like the real estate model in her home country.

“In Israel, when you go buy a house, you have something like Kijiji. You go on the site, you pick a house you like, you just buy it directly … you don’t do it with an agent, just a lawyer and that’s it,” Ms. De Groot said. “When I tried to do it here myself, I had no access to any of the data: who bought the house, when, comparables.”

With an outsiders eye, she dissected the traditional real estate model in Canada and realized two things: Agents were necessary here, for many reasons, and enough of the data were getting to the public that some of the functions of agents could be shared between buyer and agent. Justo is designed to keep the agent involved, while operating a VOW-type website that helps buyers and sellers see what’s happening in the market, and wrap it all up into a couple of lower fee options.

Justo’s fee model is calibrated for the expensive side of the GTA: If your home purchase is for more than $600,000 (which is about $150,000 lower than the region’s average detached-home selling price), you pay a flat $15,000 in commission. Additionally, while Justo will still split the full traditional 5-per-cent commission with listing agents, it will give buyer clients a chunk of the difference between the $15,000 and the 2.5-per-cent share as a cash-back bonus (the estimated cash-back is posted on all the Justo site’s online listings). “Its a reduction on your house, ‘Money out of the sky,’” Ms. De Groot said. If what you buy is less than $600,000 there’s no cashback and no flat fee, just the usual 2.5-per-cent fee.

For sellers, the structure is a simple reduced fee: 1.5-per-cent commission for 90 days at a guaranteed price, and if they don’t sell in that time, they will reduce the commission to 1 per cent.

Ms. Schmidt says the structure is similar to a friends-and-family deal, adding that what attracted her to Ms. De Groot’s vision was, “The idea of partnering with [clients] and sharing a bit of that commission with them, because they are a big part of that partnership.”

Mr. McGee’s startup, Nobul, comes at the industry with a similar ethos – that the client wants more service than what they get today – but his vision is built on an real estate insider’s view (he’s a former commercial realtor and still has his licence) of an industry that has managed to avoid fundamental change despite the existence of gigantic U.S. property tech companies such as Zillow and Redfin.

“Real estate is super entrenched in doing things the way it’s been done forever,” he said, arguing that no internet company has done to real estate what Uber and Airbnb have done to transportation or hospitality.

The concept is deceptively simple: Buyers or sellers come to Nobul to find an agent and agents on the platform offer a bid for that client, either a straight-up break on the commission or through expanded service offerings. Additionally, a combination of user ratings and reviews will help clients compare bidding agents (someday soon, Nobul also hopes to include agent performance metrics, such as list-price-to-sale ratios, in order to find who truly are the best negotiators).

Unlike traditional online brokerages, agents you find on Nobul don’t work for the startup (350 agents have been actively using the platform since its soft launch in April), they just use the site as a matchmaker to pitch their services.

“Most of the job of being a real estate agent is customer acquisition,” Mr. McGee said. “We’re seeing right now about three-to-one buyers to sellers [browsing on the platform] and a tonne of first-time buyers. Most of the people coming to our platform are millennials … they don’t have a relationship with some real estate agent who got their licence back in the seventies.” Right now, if a buyer is scrolling through Realtor.ca, there’s no easy way to find an agent to help you buy a dream house you spotted. There’s no reasons those buyers wouldn’t like to begin and end their property search online, Mr. McGee says: “This is the way that the whole world is going.”

Further, he says regulators Nobul has spoken with when negotiating entering new markets approve of the company’s goals. “Regulators are trying to achieve transparency, price competition, get rid of price fixing, they wanted the public to be happy with the biggest fees they pay in their lives. Everybody else talks about how it’s the biggest purchase in your life, they often forget to mention it’s the biggest fee you’ll ever pay, too.”

Nobul will need scale in order to work, which is why it is already expanding across Canada and into the United States. To help with that, it has attracted an enviable collection of investors in its multimillion-dollar seed fundraising, including some big-time real estate developers (a notoriously risk-averse group).

“People are looking to what makes life easy for them, where do they get a benefit? Clients want the cheapest quality brokers, this allows a buyer or seller to reach out to hundreds or thousands of brokers,” says Sheldon Fenton, CEO of Reserve Capital, which with Reserve Properties has built more than 12,000 housing units over the past 30 years. Mr. Fenton said that in addition to knowing Mr. McGee and his family, he liked the investing team and management (the board includes Canadian business notable Blake Goldring). “Developers are typically conservative. I invest in a limited number of tech opportunities that are not necessarily real estate driven. This is one we took a shine to – this is a small investment for us – but I put my money up and I believe in their concept.” 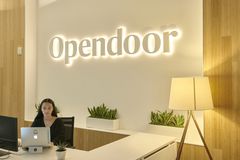