The Toronto Real Estate Board is getting closer to providing its more than 50,000 members with more accurate data that show, for instance, that it takes about 11 more days sell a home in the many sub-markets across the Greater Toronto Area than the currently published statistic suggests, according to TREB director of market analysis Jason Mercer.

That gap in market knowledge came from the way TREB had been calculating Days on Market (DOM) for home sales. For years, TREB heard from its members that the market statistics it kept were missing some crucial information. Because it calculated DOM as the amount of time a single listing lasted in the system before a sale was registered, it was missing some of the accumulated days a property spent on the market from previous listings, terminations, price changes as part of a new listing and other activity. In March, Mr. Mercer published a new study that showed, “properties that have had at least one list-terminate-relist cycle before selling have an average days on market substantially higher than properties that were never terminated and relisted.

This relisting activity was also widespread, more than had previously been known. In February, 2019, 20 per cent of sold listings were part of a relist cycle, and over the entire study period the average was 16 per cent. But the volume of sales via relistings spikes in moments of housing market stress: For much of 2017 and 2018 the share of homes sold as part of a relisting cycle hovered between 25 and 30 per cent of all sales, which Mr. Mercer attributes to market jitters over the Ontario Fair Housing Plan and the OSFI mortgage stress test regime. The PDOM for those periods also spiked, but exact figures were not released in TREB’s report.

In November, 2018, Mr. Mercer acknowledged to The Globe and Mail that TREB had never studied the difference between accumulated days a property spent on the market and listing days on market. Now that the research shows there was some meaningful gaps in the data, the PDOM stat will make its way into future TREB monthly market reports, perhaps as soon as the April edition.

For Mr. Mercer, DOM has always been a lagging indicator that describes where the market has been. Still, he says, the spread between the PDOM and LDOM will be an number worth watching. “It provides another snapshot of the marketplace. I’m not trying to liken it to equities, but you hear about volatility metrics,” he said, suggesting the tightening of the spread between the two stats could provide a quicker sense if markets are heating up or cooling down. “It remains to be seen whether something like this will follow that same path. It’s early days.”

Broker and blogger David Fleming with Bosley-Toronto Realty Group Inc., has argued there are legitimate reasons to use the LDOM stat, particularly if a new agent or broker takes on a listing it’s hardly fair the PDOM from a previous agent should be calculated against the new team. But over all, he welcomes more data for consumers.

“I love that they are responding to something that’s problematic. The DOM stuff is a sneaky little tactic to make a listing look fresh and new,” he said. He also suggested it is not a particularly useful stat to use to judge an agent’s effectiveness, in part because it leaves aside the question of whether an agent gets the best value for a home, or just the quickest sale.

“I put absolutely zero stake in the DOM stat as it pertains to effectiveness. If a seller thinks that’s important, good for them; I vehemently disagree,” he said.

In addition to publishing the stats in future monthly market report, the collected listing activity that represent a property’s full history is now available to agents on TREB’s MLS software via a one-click view. Collecting that history was once an arduous task for agents involving multiple searches. Mr. Mercer said he’s not done tinkering yet.

“We’ve been adding features over time, as we move forward we’re always looking for more ways to add to market knowledge for members,” he said. 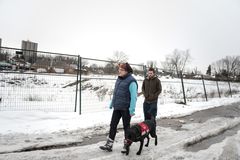