Recovering home sales and stable prices are causing some analysts to declare that the housing market will avoid a hard landing. But the market has yet to face its biggest tests – higher mortgage rates and the completion of many planned condo units, largely in Toronto, that are currently just space in the sky.

The number of homes sold over the Multiple Listing Service in May was down just 2.6 per cent from a year earlier, signalling that the steep sales slump that began last summer is now abating. May's sales came in 3.6 per cent higher than April's, the largest month-over-month gain in more than two years and a sign the market is gaining momentum. The latest numbers prompted the Canadian Real Estate Association, which represents realtors across the country, to boost its outlook for both sales and prices, saying average prices have held firmer than expected.

"While the bears continue to line up – Nobel laureate Paul Krugman being the latest – the Canadian housing market is paying little attention," says Bank of Montreal economist Benjamin Reitzes wrote in a research note.

While this spring is shaping up to be a bit softer than last year, that is a development that policy makers in Ottawa were hoping for, because they believed that the market had become too frothy. With the Bank of Canada warning just last week that the housing market, especially Toronto condos, continues to pose a major risk to the economy, policy makers don't want to see a rebound that puts prices and consumer debt levels back on the fast track.

"Even if we get through 2013 and perhaps part of 2014 with a stabilized market, the story does not end there," Royal Bank of Canada economist Robert Hogue said in an interview. "There is going to be even greater pressure later, probably in 2015 and beyond, when interest rates are going to start rising. It's going to be a real challenge at that point. A lot of condo units will be completing, so that's going to be probably rough waters."

Economists at Bank of Nova Scotia are warning that, in the meantime, the slowdown has migrated from existing homes to those that are being newly constructed. Sales of new homes in Toronto were down 38 per cent in the first four months of this year, they wrote. "Housing corrections often last years, like the U.S. or Toronto from 1989-1995, and this one is unlikely to be any different."

But the realtors' association has become more optimistic and now expects 443,400 homes to sell over the MLS this year, 2.5 per cent fewer than last year. Three months ago the association was ratcheting down its forecast for the third time since last summer, predicting a 2.9-per-cent decline this year. It has raised its forecast for next year's sales, which it expects will rise 4.7 per cent.

Notably, the association is no longer expecting the national average selling price to fall this year. In March, it was predicting that the price would edge down 0.2 per cent from 2012 to $362,600. Now it says it is expecting the price to come in at $370,900, up 2.1 per cent from last year, due to a better outlook for sales in the pricier provinces of British Columbia and Ontario.

The surprises in terms of housing sales data have consistently been higher than economists have expected, Bank of Montreal economist Douglas Porter said in a research note.

"Many other housing indicators are ... on the high side, including starts above 200,000, a double-barrelled rise in building permits and a record share of employment in the construction sector (7.6 per cent of all jobs in May)," he added. He added that he believes the market is on track for the desired soft landing, with at least 24 of 26 major cities posting price gains in May compared to a year ago. "Prices remain stable, perhaps maddeningly so for the legions of bubble mongers," Mr. Porter wrote. 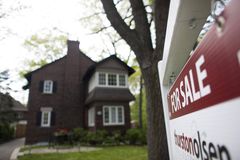