The average first-time buyer in Vancouver now needs more than a decade to save for the minimum down payment on a house under tough new federal mortgage rules, a sign that affordability in Canada’s most expensive cities has reached crisis levels.

But as two new analyses of the housing market make clear, soaring prices of detached houses in Vancouver and Toronto are masking the reality that, for many Canadians, housing has actually become more affordable over the years, spurred by falling interest rates, steady income growth and a surge in condo construction.

In the Vancouver region, where resale house prices jumped nearly 14 per cent last year to more than $950,000, it now takes 109 per cent of median pretax income to afford the costs of a mortgage, property taxes and utilities on a typical detached house, according to a fourth-quarter analysis by Royal Bank of Canada economists Craig Wright and Robert Hogue.

Thanks to surging home prices and stricter down-payment rules for insured mortgages that took effect in the middle of February, the typical first-time buyer in Vancouver would need to save 10 per cent of their pretax income for 132 months – or roughly 11 years – to be able to afford the minimum down payment on a typical house. That’s up from 89.5 months, or about 7.5 years, in the fourth quarter of last year, economists Matthieu Arseneau and Kyle Dahms said in a new housing affordability report by National Bank of Canada.

In Toronto, the average first-time buyer would need to save for 76 months, or more than six years to afford the down payment on a low-rise property. The costs of a detached house now consumes more than 70 per cent of median household income in the city.

Detached houses have now become a luxury in Canada’s two hottest housing markets, the economists say, accessible to only a select group of wealthy buyers, with little hope for prospective buyers that such conditions will change any time soon.

“The single-family home market has become unaffordable and that’s the reality for markets such as Vancouver and Toronto,” National Bank chief economist Stéfane Marion said.

That has pushed many first-time buyers into the condo market, which has actually become more affordable for such buyers because of an abundance of supply. In fact, Toronto and Hamilton are the only two major cities in which condo ownership has become more expensive over the years. In cities such as Edmonton, Winnipeg and Ottawa it is now cheaper to make a mortgage payment on a condo than to pay rent, a trend driven by a boom in new condo construction coupled with weak job markets that have encouraged more prospective first-time buyers to continue renting.

“Mostly it’s a situation where supply has been provided to meet demand,” Mr. Marion said. “So we’ve had a situation where even in markets like Vancouver, condo prices have remained relatively stable over the past five years because of incoming supply.” 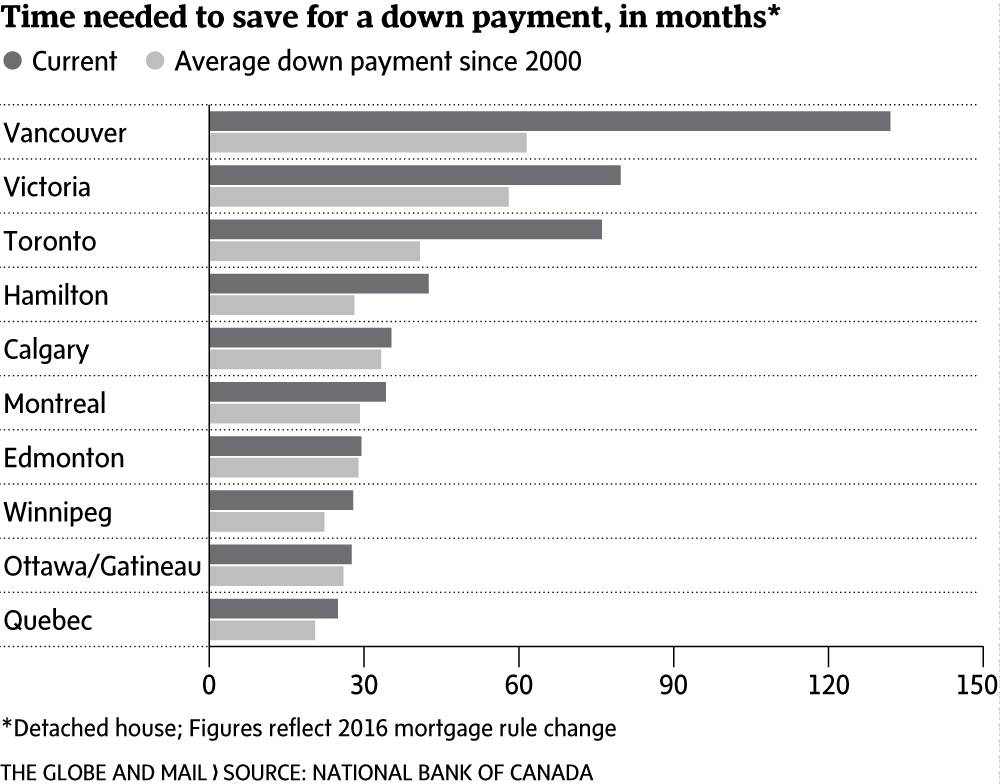 New federal mortgage rules that doubled the down payment on the portion of a house priced between $500,000 and $1-million mainly affect the market for houses in three cities: Victoria, Vancouver and Toronto. In Vancouver, for instance, a first-time buyer would have to save for roughly 11 years to come up with a down payment, well above the historic average of 61.5 months, or about five years. In Toronto, soaring prices and steeper down payments have added nearly three years to the amount of time needed to save for a house. Meanwhile, in cities such as Calgary, Edmonton and Ottawa, housing affordability is little changed from long-run averages. 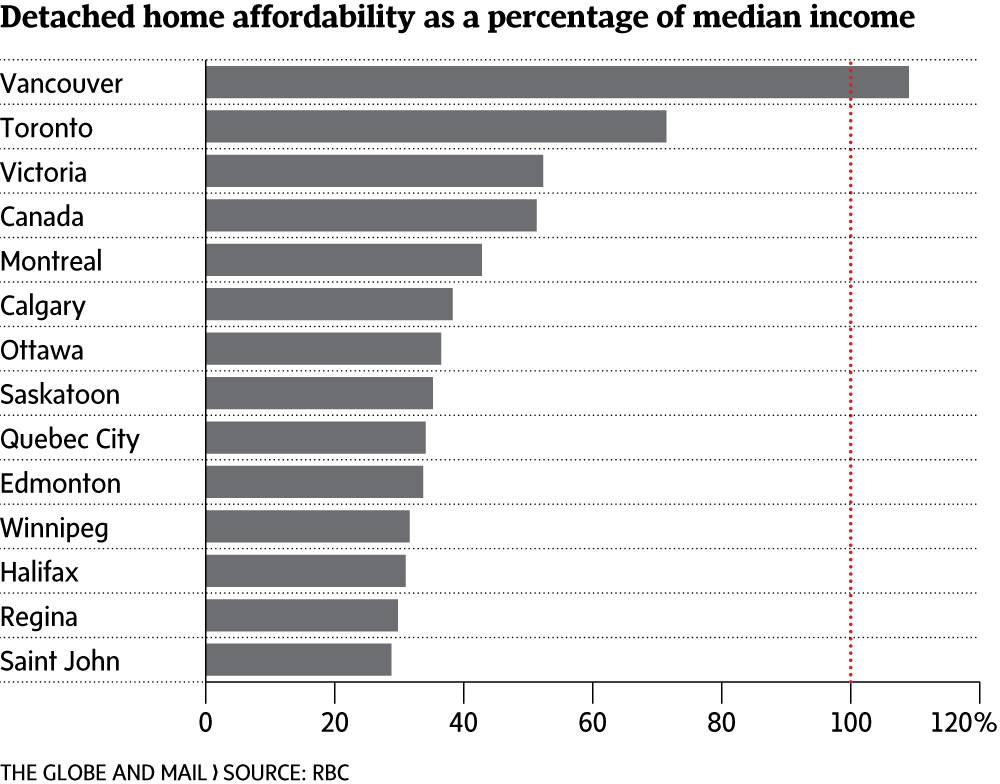 No region embodies Canada’s affordable-housing crisis like Vancouver, where it now costs 109 per cent of the city’s median pretax household income to afford a detached house, nearly 60 per cent above the long-term average. Costs have soared nearly 30 per cent over the long-run averages in Toronto, to 71 per cent of income. But while home ownership has become less affordable on a national scale, it has become more affordable in several cities, including Calgary, where the cost of a detached house consumed 38 per cent of household income in the fourth quarter of last year, 10 per cent below the city’s long-term average. 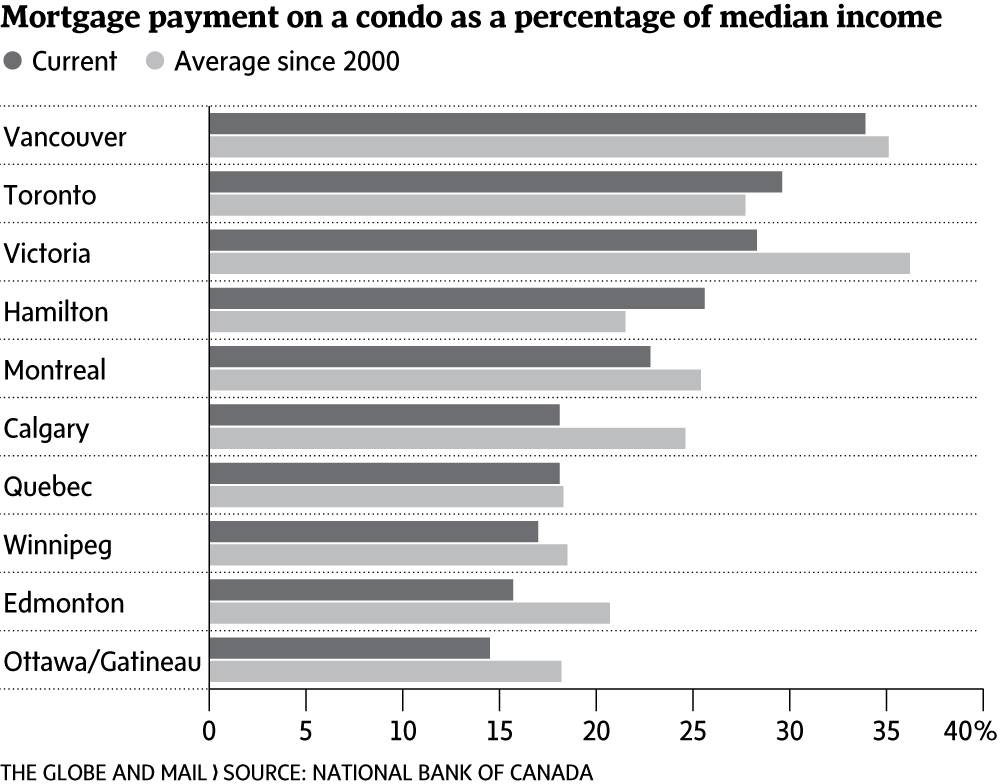 Even as buyers in Toronto and Vancouver have struggled to get a foothold into the market for detached houses, condos have proved to be an increasingly affordable option for many. A surge of new condo construction has kept resale prices in check in many cities. Coupled with falling interest rates, buyers are now able to spend less of their income to afford a condo than in the past. Nationally, the share of pretax income required to afford a monthly mortgage payment on a condo declined 7 per cent last year from its long-run average. It has fallen even more dramatically in markets such as Calgary, Edmonton and Montreal. 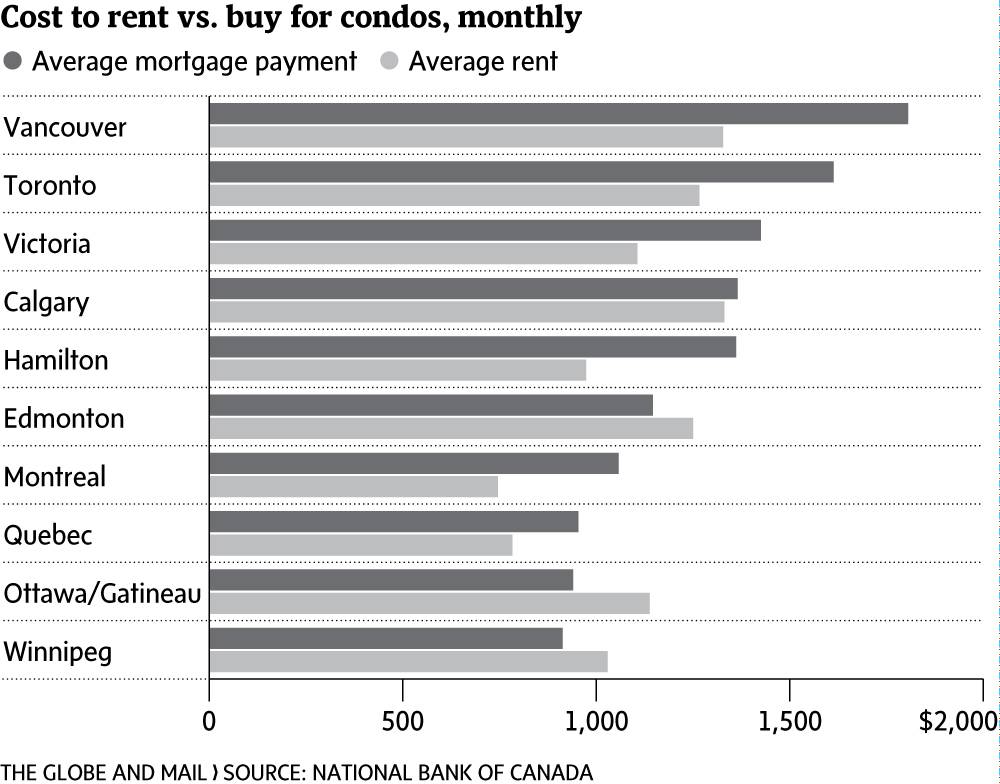 Conventional wisdom says that Canada’s housing boom has made it more expensive to buy housing in most major cities than to continue renting. But the opposite is true in several Canadian cities. In Edmonton, renting now costs an average of $104 a month more than the typical monthly mortgage payment on a condo. It is a similar story in Winnipeg. In Ottawa, the average monthly rent now costs nearly $200 more than a mortgage payment on a condo. Meanwhile, in cities such as Toronto, Montreal and Vancouver, condo ownership may be more affordable than buying a house, but it still commands a healthy premium to renting.