Fort McMurray's housing market is weakening, one of the signs of tough times in Alberta's oil sands.

Real estate prices are slumping, vacancy rates soaring and rents dropping. Lineups are shorter at the airport and coffee shops. Even the local football team is suffering as corporate sponsorships dry up.

The boom seems like a distant memory after crude-oil prices plunged by half over the past year, triggering widespread layoffs in the oil sands. The Wood Buffalo-Cold Lake region's jobless rate has doubled to 8.2 per cent.

Fort McMurray renter Richard Mayers and his family are now paying $2,700 a month for a four-bedroom home, down from $3,200. It's a much-needed price break because Mr. Mayers recently was laid off as operations manager at CEDA International Corp., which provides industrial maintenance services for the oil-sands industry.

He has been trying to keep busy, serving as offensive-line coach for the Fort McMurray Monarchs of the Alberta Football League, where many former university players have ended up. Last summer, team members easily landed jobs. But with the economic downturn, 10 players on the 65-man roster were still searching for work in July.

"There were a lot more job opportunities a year ago," Mr. Mayers said as the amateur squad practised at a high-school field. The Monarchs have felt the chill as a group, with corporate sponsorships totalling $1,200 recently, compared with $22,000 last summer.

Rents have declined this spring and summer as landlords offer discounts in an effort to keep tenants and discourage them from moving to cheaper accommodations.

Canada Mortgage and Housing Corp.'s rental-market survey for the Wood Buffalo region, which is dominated by Fort McMurray, shows a sharp rise in empty apartment units. The vacancy rate in April for one-bedroom units in Wood Buffalo jumped to 21 per cent, compared with 5.8 per cent a year earlier. One-bedroom rents averaged $1,574 in April, down 8.2 per cent from $1,715 in the same month in 2014, CMHC's survey shows.

The local resale housing sector is also looking wobbly as some owners begin feeling the economic pinch. In the Wood Buffalo area, the price of all types of properties sold on the Multiple Listing Service will average $544,000 this year, down 9 per cent from $597,626 last year, according to a forecast by CMHC.

Listings for detached houses are up while sales are down in a buyer's market.

There are fewer travellers at the airport, which opened a new terminal in mid-2014. Fort McMurray International Airport handled 569,633 commercial and charter passengers in the first half of this year, down 11.8 per cent from the same period last year.

In the three months ended June 30, the airport saw a sharp decline in charters as energy companies cancelled flying contracts. The number of charter passengers going through the airport tumbled to 33,901 people in the second quarter, down 47.1 per cent from the same period last year, said AltaCorp Capital Inc. analyst Chris Murray.

Tony LeBlanc, a skilled tradesman who has found steady work at Syncrude Canada Ltd., remembers paying $1,200 a month for his portion of the rent in a two-bedroom basement suite that he shared when he arrived in Fort McMurray in early 2013. That same year, he moved to a mobile home, where he now pays $750 a month for accommodation that he shares with two roommates.

"Whether or not my job is safe from the downside of the economy and the price of oil, your guess is as good as anybody's," Mr. LeBlanc said.

He said it used to take 20 minutes or more to get served coffee at one of the community's three Tim Hortons outlets, and now the wait is closer to 10 minutes. Mr. LeBlanc and his co-workers have noticed fewer cars and trucks along Highway 63 between Fort McMurray and oil-sands plants.

In June, a new football stadium opened in Fort McMurray – a $133-million facility planned long before oil prices plummeted. A regular-season CFL game between the Edmonton Eskimos and Toronto Argonauts attracted an announced crowd of 4,900 fans in a stadium that could have welcomed 15,000 spectators.

During the boom, more workers would have shelled out $109 to get a good seat or more companies would have bought tickets for employees, several fans said.

The Wood Buffalo-Cold Lake region's unadjusted unemployment rate, based on a three-month moving average, hit 8.2 per cent in June – double the 4.1-per-cent jobless rate in the same month of 2014.

Stephanie Swain, an administrator who has switched her career path to pipe fitting, is thinking about moving back to Nova Scotia with her husband, Paul MacLeod, a veteran pipe fitter. "Things are bad in Fort Mac," she said, referring to growing unemployment.

In a reversal of fortunes, instead of East Coast workers flocking to Alberta, Irving Shipbuilding Inc. is recruiting employees for its shipyard in Halifax, hoping to lure former Nova Scotians back home.

Irving held a job fair in July in a meeting room at Fort McMurray's leisure community centre. The gleaming centre, built during the oil boom, features two NHL-sized rinks and an Olympic-sized swimming pool. Suncor Energy Inc. has the naming rights for the centre while Syncrude's name is on the aquatic centre.

"The oil-sands industry is invested in the community," said Kwame Osei, who coaches football in Fort McMurray at Holy Trinity Catholic High School, which shares entrance doors with its neighbour, the Suncor Energy Centre for the Performing Arts. 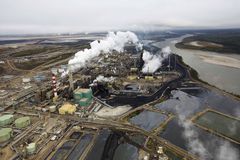 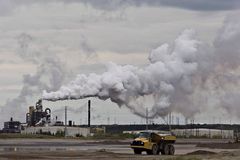