Skip to main content
GRAHAM LANKTREE
Special to The Globe and Mail
Published May 26, 2015

This is the eighth in a series of stories on global property that examines the shifts and trends in the housing market on the international stage. 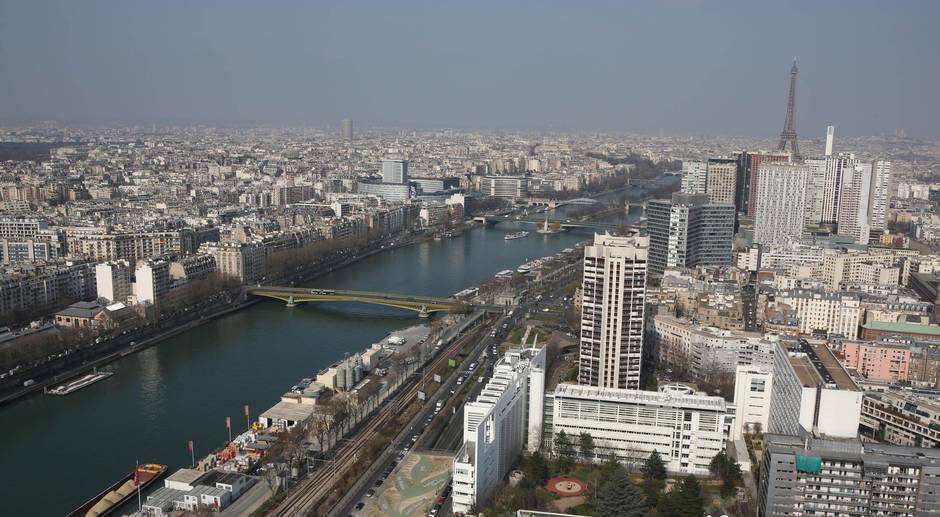 This year in Paris, the Louvre, Centre Pompidou and Grande Arche may be elbowed from their positions on the architectural vanguard.

Enormous changes have been set in motion in the French capital since socialist Mayor Anne Hidalgo was elected just over a year ago in April of 2014. Officials say the city is being made over for the 21st century.

With rare speed Ms. Hidalgo has thrown the wheels of government into high gear to catch investors’ eyes and attract people to live and work in the city. 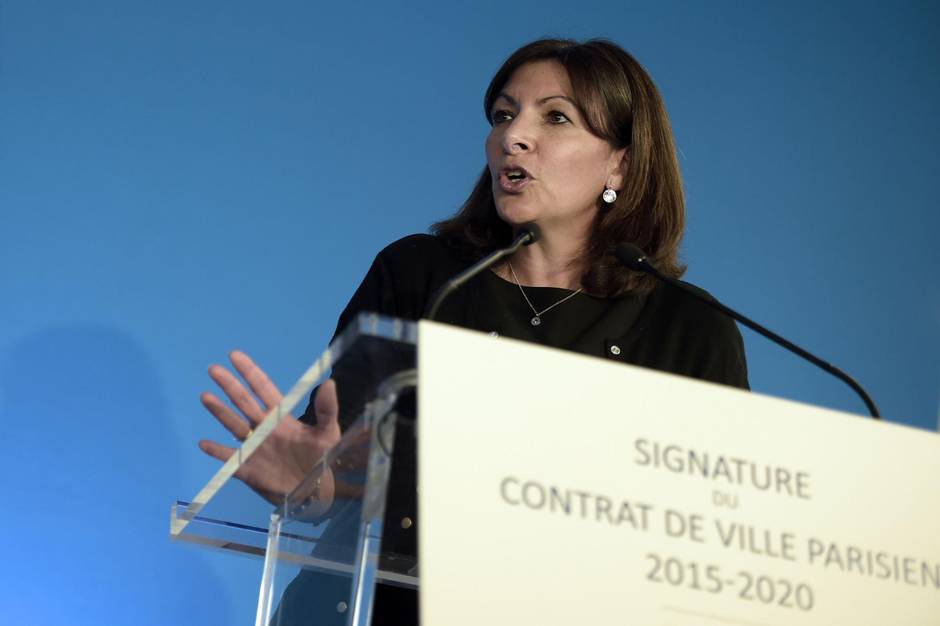 In July, building-height restrictions are being adjusted to allow tall towers; a competition is under way to choose 23 innovative new pieces of architecture for the city, with a view to urge the conversion of unused office buildings into residences; and new building taxes are being brought to bear to quicken the pace of these conversions.

All this while the French government is pouring money into the Grand Paris project to modernize the capital’s public-transit infrastructure to set up the city as a compelling place to live.

“We want to be a leader in innovation in the field of urban design and architecture,” says Jean-Louis Missika, deputy mayor of Paris. In charge of urban planning projects, Mr. Missika heads the Reinvent Paris competition launched late last year. This call to architects around the globe will see their most inventive new designs compete to reimagine 23 unused old buildings and empty spaces in the city centre.

Among the buildings available for reinvention are some from the 15th, 18th and 19th centuries, a garage, an old electrical sub-station, a train station and office buildings. The competition has attracted 815 entries from 15 countries, including Brazil, United Arab Emirates and parts of Asia. Some of the architects and their firms “are very famous,” said Mr. Missika without wanting to reveal names quite yet.

Architecture firm Planning Korea is among the 650 that have just passed the first round of judging and have moved on to the second round, which will narrow the field in July before final decisions are made in October. 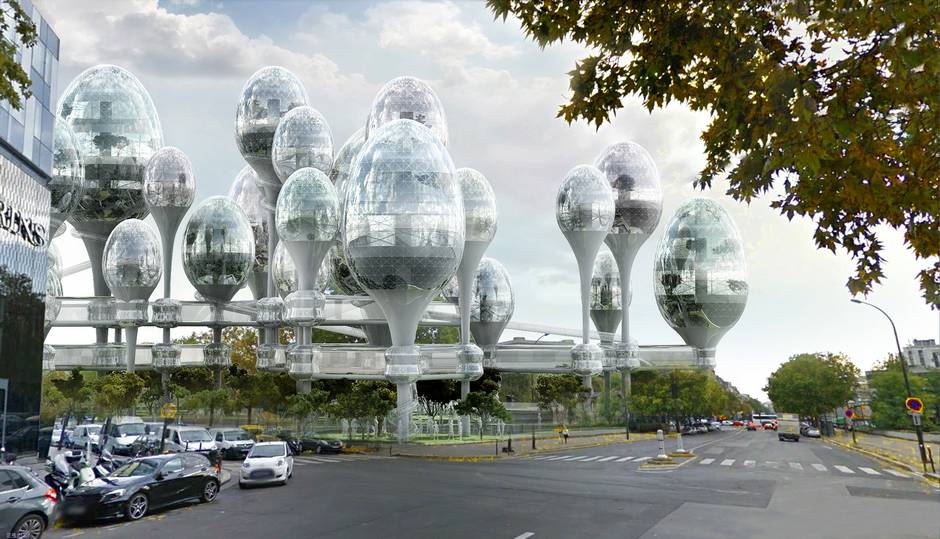 “The City of Paris will benefit from these world-class urban revitalization concepts,” said Thomas Won, the South Korean firm’s director.

Mr. Won said the firm chose the space over the Boulevard Périphérique in the heart of Porte Maillot for its strategic position between the central business district of Paris, known at the CBD, and the La Défense district in the west where new office buildings have sprung up. 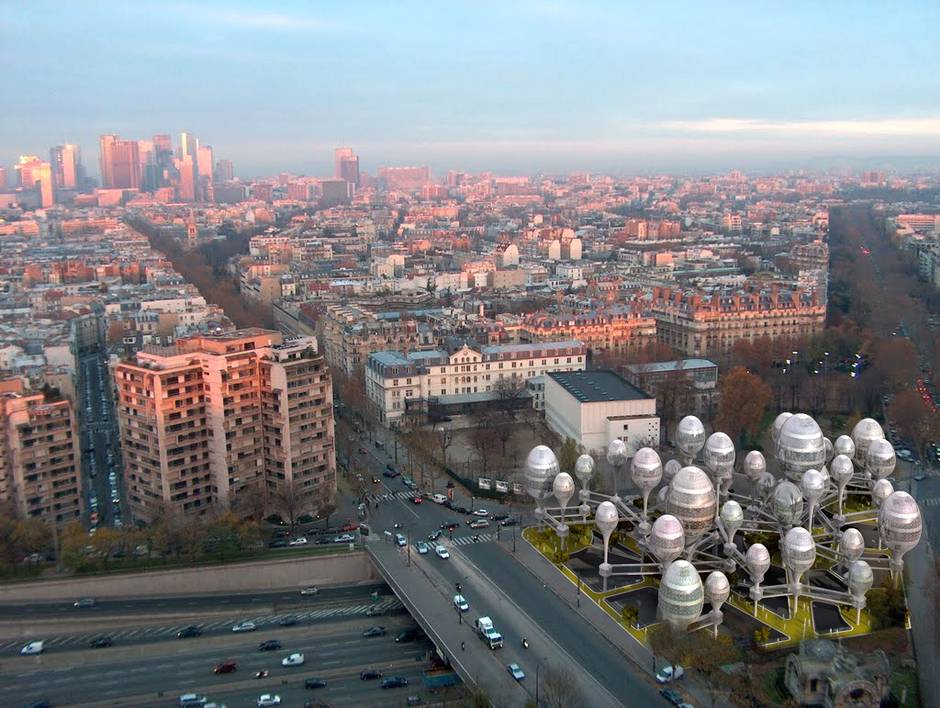 The space over the Boulevard Périphérique – located between the central business district and the La Défense office district – was chosen by the Korean architects for their fanciful project. (Planning Korea Architects) 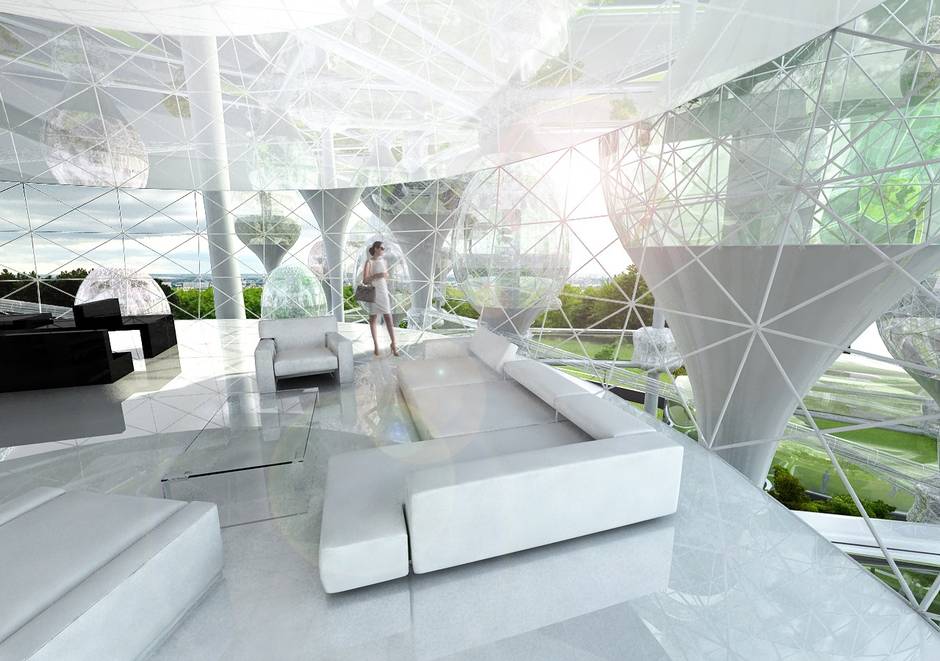 Paris in the 21st century is gaining a diverse population, and “the city needs to accept this complex identity and become a space that reveals this,” Mr. Won said. The hope is, Mr. Missika adds, that the project will attract even more people to the city.

The population of Paris is adding roughly 100,000 people each year to the 10 million who already live there. “There is much more demand,” according to Lydia Brissy, director European research with Savills estate agents, “than available and suitable supply” to house all of them.

In the past two to three years prices for residential real estate have remained flat, she adds, “but it has started to rise again and there’s lots of demand. The financing conditions are getting much better and it attracts people into buying property.”

The Reinvent Paris projects that Mr. Missika is particularly interested in are the ones that will convert old office buildings into residences to allow many newcomers to live in the city centre.

“Because Paris is very dense we are thinking of buildings for housing where the sharing is not only for laundry but for reception rooms,” he said, adding the city wants the project “to show examples of the transformations of the buildings: the second life or third life of the building.”

How Paris stacks up

– Paris has a 20-per-cent share of all international real estate investment in Europe.

– The mayor of Paris is pushing for the conversion of 250,000 square metres of office space to residences over her six-year term.

– On average from 2001 to 2012, five to six Paris office buildings annually have been converted to residential properties.

– The La Défense Renewal Plan will create 100,000 square metres of housing in the high-density business district in the coming years.

– Dropping height restrictions in Paris will allow more tall mixed-use buildings such as the two 1,060-foot towers of Hermitage Plaza designed by Norman Foster, which with 85 and 86 floors will be the tallest buildings in the European Union.

– The sale of a property completed within the past five years is subject to VAT at the standard rate of 20 per cent.

– The price of prime property in Paris is often 20 to 30 per cent less than in central London.

It’s estimated Paris has 800,000 square metres of empty office space. By the end of her six-year mayoral term in 2020, Ms. Hidalgo plans to entice developers to convert 250,000 square metres to residences. Reinvent Paris will spur this trend that has been gaining popularity since early 2001.

A 2013 report by the Paris Urban Planning Agency shows that office to apartment conversions increased from 70 each year between 2001 and 2004 to more than 140 annually from 2010 to 2012. Over 12 years, the conversions transformed 393,000 square metres of office space into residences. That’s an average of 400 new homes every year.

Nearly 40 per cent of empty office buildings are located in the centre of Paris, according to Ian Brossat, assistant to the mayor of Paris in charge of housing. So the government has also devised a new tax to push developers to convert these to homes. On Jan. 1 the city began to tax the owners of vacant office buildings 20 per cent of the rental value in the first year of vacancy, 30 per cent the second, and 40 per cent in the third.

“The concern about converting is that the cost is 20 to 30 per cent above the cost of regular construction,” said Savills’ Ms. Brissy. However these developments continue apace.

Philippe Plaza, chief executive officer of its developer Eiffage-immobilier, has said that by June the company will launch “an investment fund dedicated to this type of operation.”

These reinventions are linked to an even larger plan: the Grand Paris project, which will create a new master plan for transport in the city, joining and modernizing transport hubs, airports, high-speed rail, and adding four new subway lines worth €26.5-billion.

The idea is to connect the suburban areas so commuters won’t always need to travel through the city centre. All these upgrades are already attracting companies such as Swedish real estate investor Akelius, which bought 200 apartments in central Paris for €44-million in February.

Mr. Missika is so pleased with the success in attracting international attention that next year he intends to export the Reinvent Paris model to sites throughout the greater Paris region.

“The question of the reuse of the buildings,” and the transformation of Paris, he said, is “an experiment to see if this kind of new way of building the city works.” 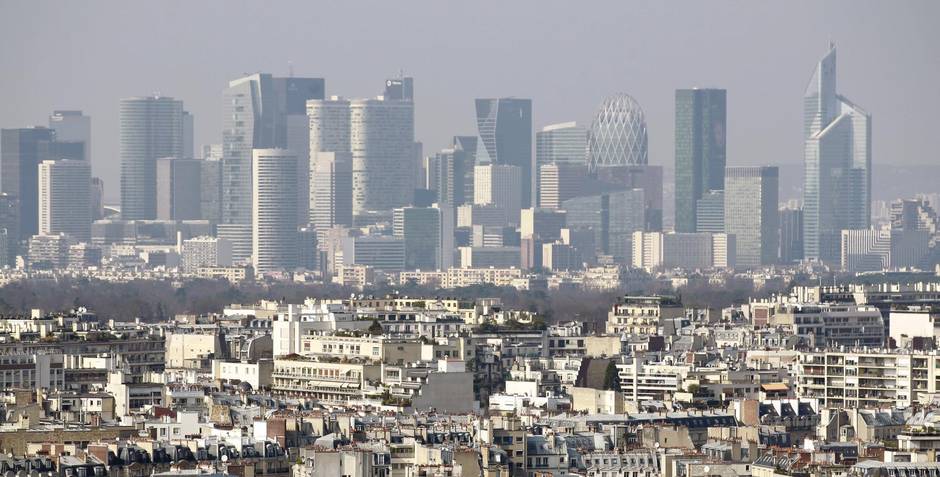 In background, La Défense business district, where new, higher office buildings have sprung up, in comparison with the medium-rise central business district of Paris, known as the CBD. (Remy de la Mauviniere/Associated Press)