The mortgage changes will likely be felt especially hard in Greater Vancouver and the Greater Toronto Area, according to the Canadian Real Estate Association.

"First-time home buyers, particularly in housing markets with a lack of affordable inventory of single-family homes, may be priced out of the market by the new regulations that take effect on Oct. 17," CREA chief economist Gregory Klump said in a statement on Friday.

He made the comment as CREA released data showing the average price for various housing types sold nationally in about 100 markets in September reached $474,590, up 9.5 per cent from the same month in 2015. Sales volume increased 4.2 per cent.

In most cases, homeowners who are looking to upgrade to larger houses must first sell their existing properties before they are able to acquire their next place.

"First-time home buyers support a cascade of other homes changing hands, making them the linchpin of the housing market," Mr. Klump said. "The federal government will no doubt want to monitor the effect of new regulations on the many varied housing markets across Canada and on the economy, particularly given the uncertain outlook for other private-sector engines of economic growth."

Industry experts say the GTA has a wider variety of residential options for home buyers to choose from, notably semi-detached properties and rowhouses, compared with Greater Vancouver. Detached houses sold in the City of Vancouver recently averaged more than $2.6-million – double the price of those in the City of Toronto.

In February, the B.C. government unveiled a new tax on properties in the province that sell for more than $2-million. The provincial government also implemented a B.C. tax on purchases by foreign home buyers in the entity known as Metro Vancouver, effective Aug. 2.

"Detached houses in Vancouver will still be out of reach for the vast majority of working families. So, what other kinds of supply can we bring to the market? We need to look at building more three-bedroom condos and townhouses near transit," Jonathan Cooper, Macdonald Realty Group's vice-president of operations, said in an interview.

CREA said nine of the 11 metropolitan markets that it tracks through its home price index showed gains in September from the same month in 2015. Benchmark prices, used by the industry to represent typical existing properties sold, fell in Calgary and Saskatoon. The overall benchmark price for the 11 markets hit $576,100 last month, up 14.4 per cent from a year earlier.

"We believe that the new measures – that include more stringent and uniform qualifying rules for mortgage insurance across mortgage types – will both speed up and harden the landing that we previously expected to occur in the year ahead, although they are unlikely to cause a crash," Mr. Hogue said in a research note.

Average home prices have flattened in Greater Vancouver but they remain on the rise in the GTA.

"The picture emerging from the September statistics is in line with our earlier assessment that Canada's housing market is down to only one major 'heat source' – Toronto – with Vancouver now quickly losing some of its heat," Mr. Hogue said. 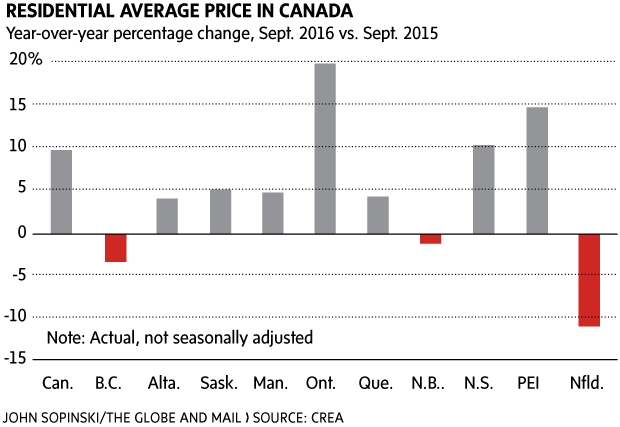 How the new housing rules affect your purchasing power
October 7, 2016
Ottawa’s new mortgage rules will drive up rents in Toronto: study
October 14, 2016
Ottawa's new rules hits first-time home buyers
Subscriber content
October 7, 2016
Follow Brent Jang on Twitter @brentcjang
Report an error Editorial code of conduct
Due to technical reasons, we have temporarily removed commenting from our articles. We hope to have this fixed soon. Thank you for your patience. If you are looking to give feedback on our new site, please send it along to feedback@globeandmail.com. If you want to write a letter to the editor, please forward to letters@globeandmail.com.
Comments