Adding a third floor to one's home is difficult enough: Beyond practical considerations and who best to design and implement them, schedules and disruption of daily routines, there are neighbours to appease.

And now, adding to the confusion, the City of Toronto has added an additional layer of red tape in the form of a zoning bylaw put into effect in May, 2013. In a nutshell, claims an Ontario Association of Architects press release, the bylaw "virtually eliminates sustainable design elements such as green roofs and solar panels [and] discriminates against flat roof housing."

A flat or shallow-pitch roof can go no higher than 7.2 metres (two storeys), which means third-storey additions must have a pitched roof; even then, says architect Mary Ellen Lynch, there are restrictions "that dictate the slope of your roof, so if you wanted a really tall sloped roof like some of these Victorians or Romanesque styles, you can't do that either.

"And then dormers are super-restricted as well; there's this really complex calculation for the size of the front dormer," she further explains. Ms. Lynch should know. Co-founder of Lynch + Comisso Architects, Ms. Lynch regularly works with clients in modest-sized homes – often in the firm's neighbourhood of Annette Street and Runnymede Road, now known as Annette Street Village – who have limited options should they decide to expand; small backyards and narrow lots mean going up is the only way to avoid going elsewhere. Obviously, in an established enclave of two-storey homes, going up must be done with sensitivity.

A stone's throw away from Lynch + Comisso's storefront practice, Leslie Maunder and Riun Shandler are breathing a sigh of relief as they watch finishing touches applied to their semi-detached home, which has been experiencing an "almost gut reno" since May, 2013. A major part of the Lynch + Comisso project has been the addition of a third storey, which now contains the couple's master bedroom and bath.

"Our starting point," says Mr. Shandler, father of two kids and a dog named Checkers, "was I just wanted my own bathroom …which was not doable with the floor plan downstairs, so this was a good solution."

From the street, the addition is demure since it tucks back behind the home's chimney; it's no wonder nary a peep of complaint came from a neighbour's lips. From the rear, however, the addition is bold, with long windows into the master bath and a big deck. Inside, the ingenious floor plan gives two-thirds of the width to the bedroom while the other third is split between a big bathroom (with a bold orange stripe of tile) and a generous walk-in closet that benefits from natural light; the bed slips into the space between the doorways to each room. Because the addition takes the couple up a little higher than the rest of the neighbourhood, they enjoy a very "Coronation Street" view of rooftops, they laugh.

"We wanted an architect who could also provide some design guidance," says Mr. Shandler, "because we lack that." Adds Ms. Maunder with a laugh: "There are some people that want to micromanage that process, but we are not those people, we were happy to let Mary Ellen and [general contractor] Claudio communicate with each other directly."

A seven-minute walk away, the detached home owned by Rosemary Bonnell and Laurent Mareschal did expand into the backyard, a little, with help from architect Charles Gane of Core Architects in 2006.

A few years later, however, an addition to the family of four required a bricks-and-mortar addition, so the couple called on Ms. Lynch to make the basement livable. And then, more recently, a third floor was added to achieve some peace and quiet for the adults.

Mr. Mareschal says he'd walked by yet another Lynch + Comisso top-up in the area, and was struck by "the unobtrusive look" of it.

Similar to the Shandler/Maunder addition, the Bonnell/Mareschal appendage tucks away neatly to avoid offending eyes on the street, but, in the backyard, it gains strength as picks up on Mr. Gane's bold first-floor addition to repeat an L-shaped "waterfall" roofline trimmed in ipe wood. Inside, three skylights (one in the shower) flood the warm, woodsy space in light. Again, the walk-in benefits from a clerestory and a deck affords the couple a commanding view of trees and sky.

Front and back, the home is clad in marine-grade cedar, which, while requiring maintenance, was significantly less expensive than composite products that don't require care (Formica's VIVIX, says Ms. Lynch, would have come in at $45 a square foot.).

Since both of these projects sport a shallow-pitch roof, both could have been rejected under the new bylaw at a committee of adjustment meeting since each constitutes "a minor variance." This comes, says the OAA, "at a critical time when urban environments are rapidly changing and the world is looking for sustainable solutions for modern living."

With Toronto's laneway housing situation already a red-taped mess, this newest wrinkle in residential housing is troublesome, to say the least.

Construction Costs: Associated with 3rd floor work including design fees and C of A (mechanical system was put in with basement phase so not counted here), exterior cladding and windows: $220,000 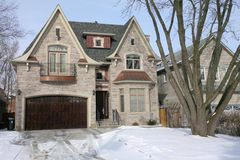