Unless you know exactly where to look, you might walk right by and never notice the extraordinary house I visited last week in west-side Toronto’s elderly Oakwood neighbourhood.

It sits, almost invisible from the streets nearby, on a formerly vacant lot tucked in between two rows of ordinary homes and deep backyards.

Constructed (I suspect) in the 1920s or thereabout, the family homes on the area’s avenues are respectable and unfancy and dead serious. The owners of the property, school teachers with two young children, wanted a place to live that didn’t take itself so seriously, and that responded imaginatively to its unrespectable spot in the otherwise prim urban street-grid. 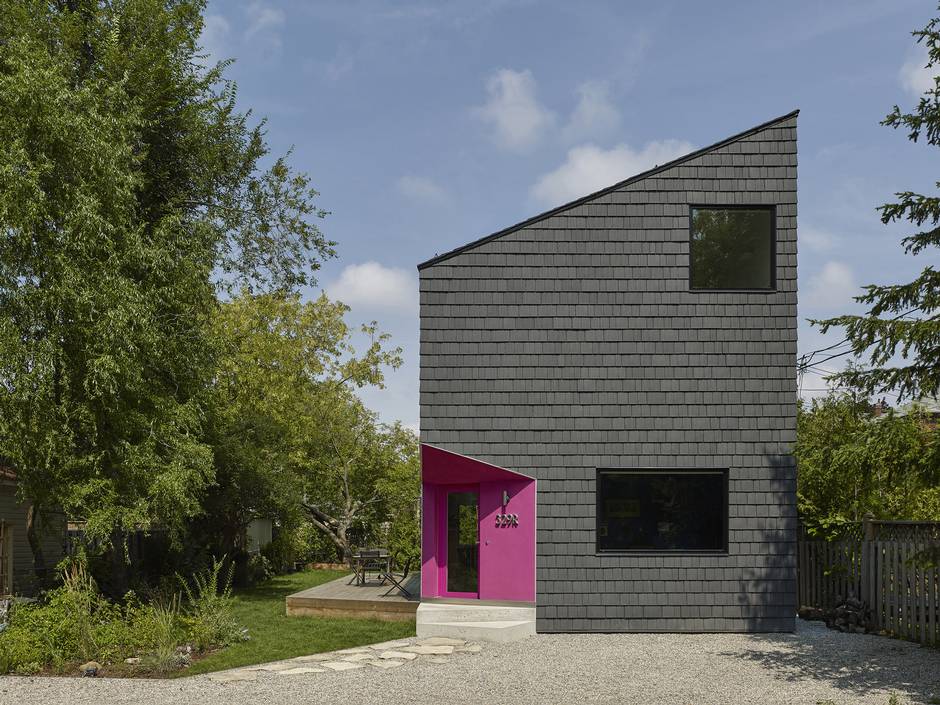 For this family, Toronto designers Merike Reigo and Stephen Bauer have created a 1,960-square-foot, two-level house that, instead of ignoring the marginality of its site and being tastefully historical or suburban, draws artistic energy from where it is. The look and feel of the dwelling were influenced, Ms. Reigo said, by backyard sheds, utility shacks, detached garages on lane ways – oddly scaled, unpretty buildings that are usually considered beyond the pale of capital-A Architecture. The wonderful result is surely as tough and unpretty as its sources – but it is also ruggedly handsome and surprising, as those sources rarely are.

Take, for example, the house’s exterior treatment. The shape of the ground-floor level is that of a rectangular box, glazed on one side. There is no “front” as such, since the mid-block building does not face a street. The upper level is also boxy in plan. But Ms. Reigo and Mr. Bauer let their imaginations fly when it came to the roof. This pitched element features a ridge-pole that runs diagonally from corner to opposite corner, causing the roof-line to dip and soar unroutinely. 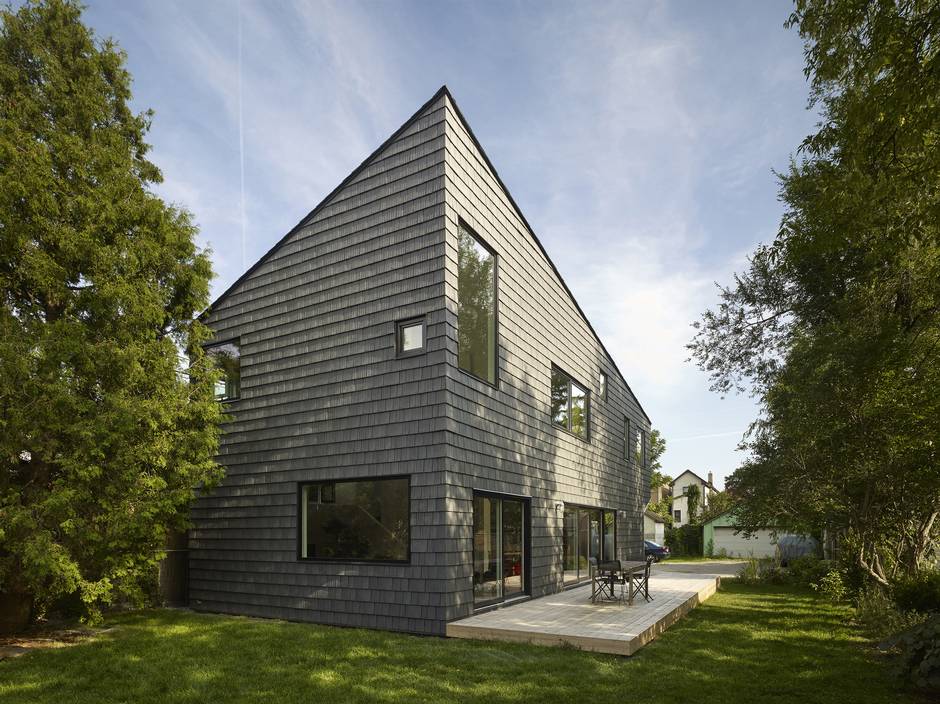 The unconventional geometry of the roof is strongly emphasized by the dark cladding that covers it and the exterior walls. At first glance, this surfacing appears to be an affair of overlapping wooden shakes stained dark – the sort of thing one finds in off-the-rack garden huts carried by hardware stores. Not so, Ms. Reigo and Mr. Bauer explained. The shingles system has been fashioned by its California-based manufacturer from recycled tires and other synthetic detritus, and is non-flammable, non-soakable by rain or snow, and, in terms of physical performance, mean as a sore-tailed cat.

But while designed to withstand most anything that nature or the city can throw at it – the inexpensive stuff comes with an 80-year warranty – this cladding is not visually dull or dowdy. Its dark, textured surfaces, sparsely and irregularly punctuated by window openings, generate an atmosphere around the house of alert but settled calm, retirement from the bustle of the street only a few yards away. 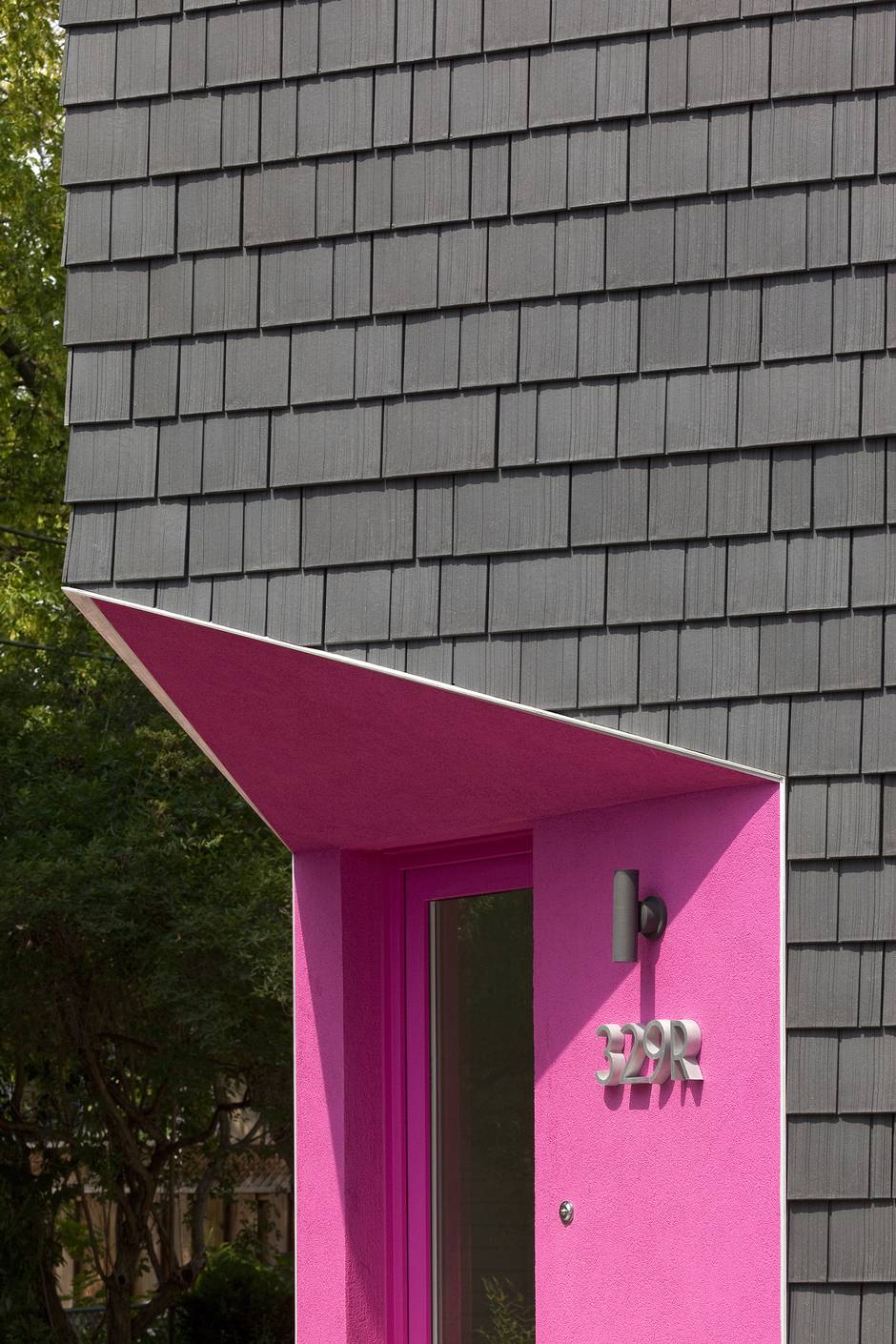 The general calm of the outside is counterpointed for a moment, however, by the flamboyance of the main entrance. The roof-plane comes down sharply, like a tent flap, at this corner, a chunk of the angle is sliced out, and the front door is framed by expanses of sizzling pink. The injection of the funny entryway into a scheme that is otherwise admirably sober and urbane is abrupt – perhaps too abrupt, like a cheerful remark that doesn’t come out right. But never mind: humour is rare enough in Toronto’s residential architecture, and we should welcome designers who are willing to give it a try.

Be that as it may, whatever reservations I had about that doorway vanished when I went through it and found what Ms. Reigo and Mr. Bauer had done inside. 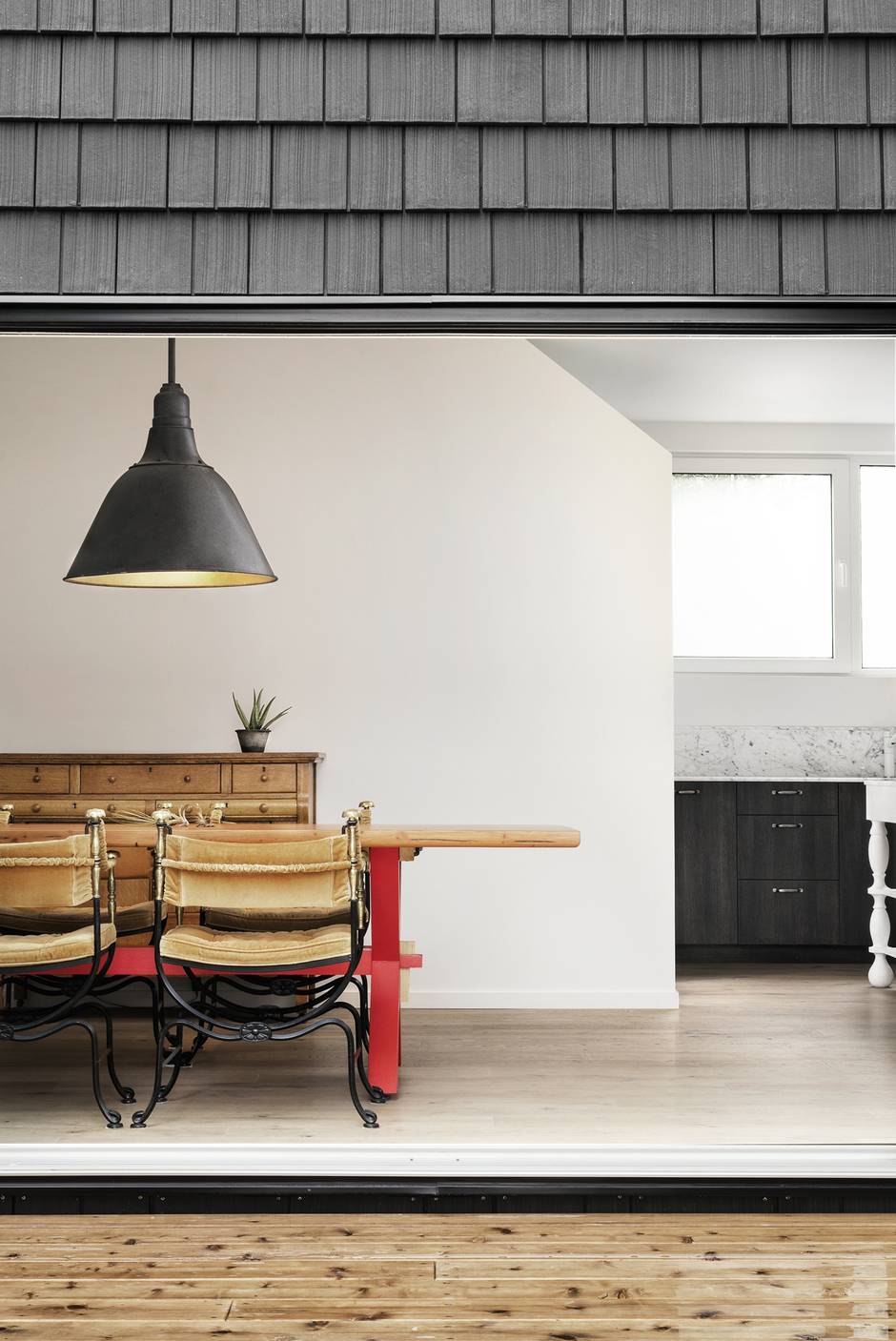 Instead of of laying out the downstairs interior as a blankly open-plan box, the designers have gathered the common spaces in the house according to their roles in the overall program. The compact kitchen, for example, is focused on a marble-topped work table with wooden legs turned on a lathe – an old-fashioned touch, specified by Ms. Reigo and Mr. Bauer, that lends the room a certain traditional gravity often lacking in contemporary kitchens.

If the note struck by the ground-floor arrangements is mostly practical and serviceable – it’s an appropriately comfortable setting for the social life of this young family of four – the upstairs (where the three bedrooms are) is exciting, and visually fascinating. 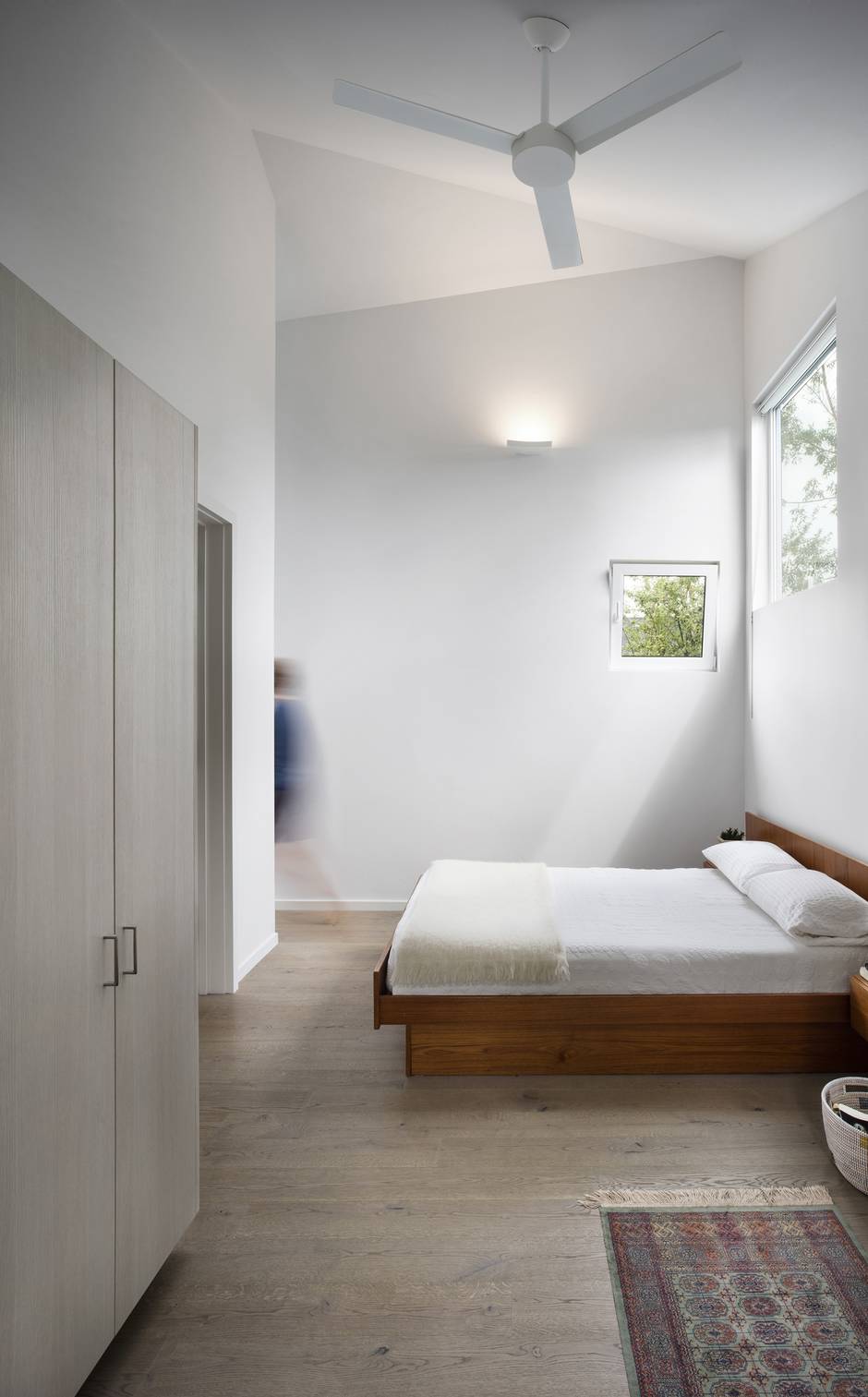 Credit for the outsized interest of this level – in fact, it’s just about the most interesting suite of bedrooms I’ve ever seen in a Toronto residence – goes, of course, to the eccentrically pitched roof. The high white walls of the bedrooms and corridor touch the ceiling at odd angles. Long sight lines terminate at dramatic meetings of planes and surfaces. The crisscrossing play of light and shadow here reminds the owners of a chapel – an image that strikes me as apt, though as unexpected as much else about this beautiful building inspired by lowly shacks and sheds.

John Bentley Mays filed this column shortly before his death on Sept. 16. There will be a Mass for the dead at St. Vincent de Paul Church, 263 Roncesvalles Ave., Saturday, Sept. 24 at 10:30 a.m. In lieu of flowers, the Mays family requests donations be made to Doctors Without Borders, Syria Relief.