How many are out there? They can’t all be gone; too much artistry – from sketch to fabrication to illumination to the memories—means that many must have been squirreled away. But where? And by whom?

“For me, it’s like Raiders of the Lost Ark, I know there’s a big warehouse somewhere,” laughs Mark Garner, executive director of the Downtown Yonge Business Improvement Area. And while he doesn’t sport a battered fedora or a trusty whip at his belt, Mr. Garner is on a quest to find, restore and reinstall Toronto’s iconic neon signs in an as-yet-undetermined laneway beside Yonge Street.

For the millions of tourists who walk it each year, and the tens of thousands of folks who will call Yonge Street home in the next decade, it’ll be a way of telling Toronto’s story in an artful and nostalgic manner.

It’ll also help with congestion: “We’ve got, currently forecasted, 26,000 new [residential] suites going onto Yonge Street in the next three to five years, that’s 50 to 60 thousand more people living in this neighbourhood,” he says with a touch of disbelief. 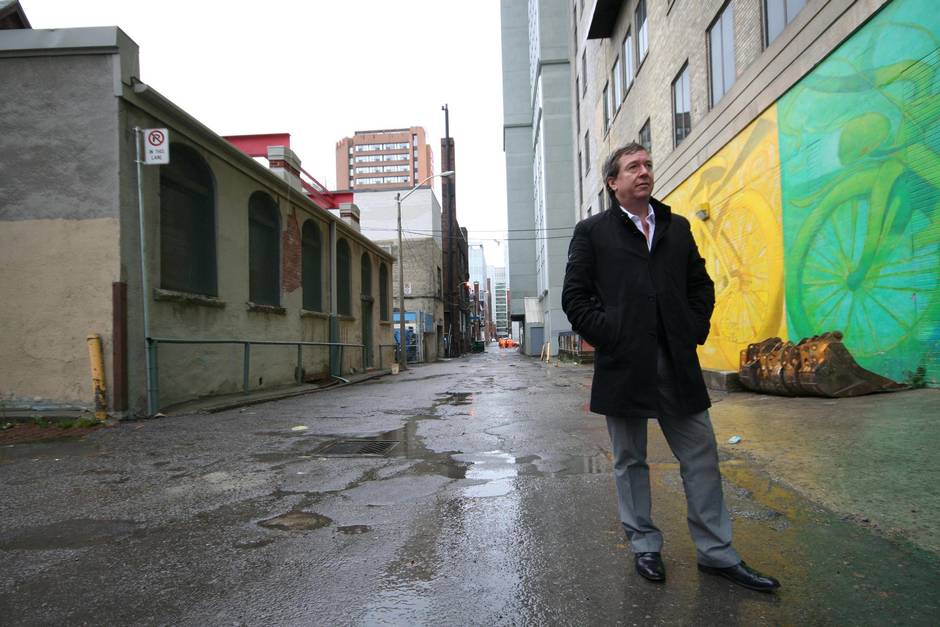 Mark Garner in the laneway behind Victoria Street, Toronto. (Dave LeBlanc for the Globe and Mail)

“We’ve got to create positive foot traffic in these laneways – we’ve got to get people off of Yonge Street.”

Call it the ‘Neon Relief Line’ then. And for those of us who dread the sight of another ‘Anywhere U.S.A.’ chain-store sign along Yonge, it’ll be a visual relief to see the warm reds, cool greens and blinking yellows dancing away in their little hand-blown tubes while hawking everything from fast food and appliances to auto parts.

Unlike backlit plastic, buzzing, bouncing neon has a way of touching us; neon signs become local beacons that not only tell us where we are, but who we are. Or who we were, in any case: “There’s a connection to neon,” agrees Mr. Garner. “For me, as a Scarborough boy, when you went to Duckworth’s fish and chips, it’s that neon sign.

“I’m starting to understand cultural preservation,” he continues, looking up at the ceiling of his tidy office at Atrium on Bay, “and what I’ve really started to expose myself to now is the conversation around sensory heritage.” 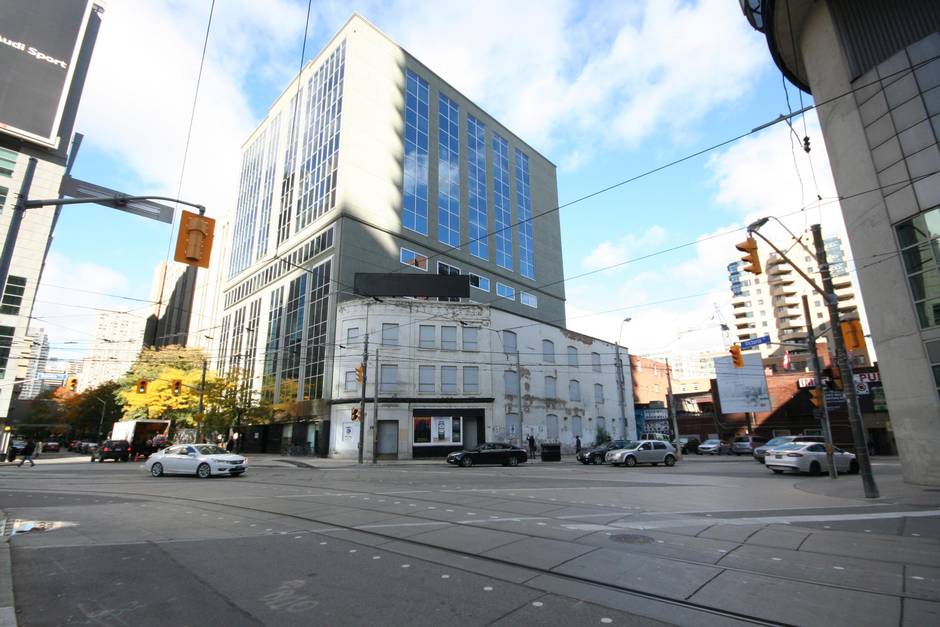 So which laneway would work best to stimulate our senses? Mr. Garner has a few ideas. His first pick takes the derelict building at 38 Dundas St. E. (the city-expropriated former Hakim Optical Building) and uses it as a gateway to Victoria Street Lane, which terminates at Devonian Pond on the Ryerson campus.

While the top two floors would contain the City of Toronto’s music offices and/or a green room for Dundas Square performers (currently, they use “a storage locker down in the basement of the parking lot,” says Mr. Garner), the ground floor would contain a “neon café” that would offer up cappuccinos and a small sampling of restored signage hanging from the ceiling.

The triangular forecourt outside would contain a few larger signs mounted to poles. When patrons would inquire about the signs, the barista would point them to the laneway just outside the café’s back door, where much larger signs would be installed on the backsides of Ryerson University buildings. 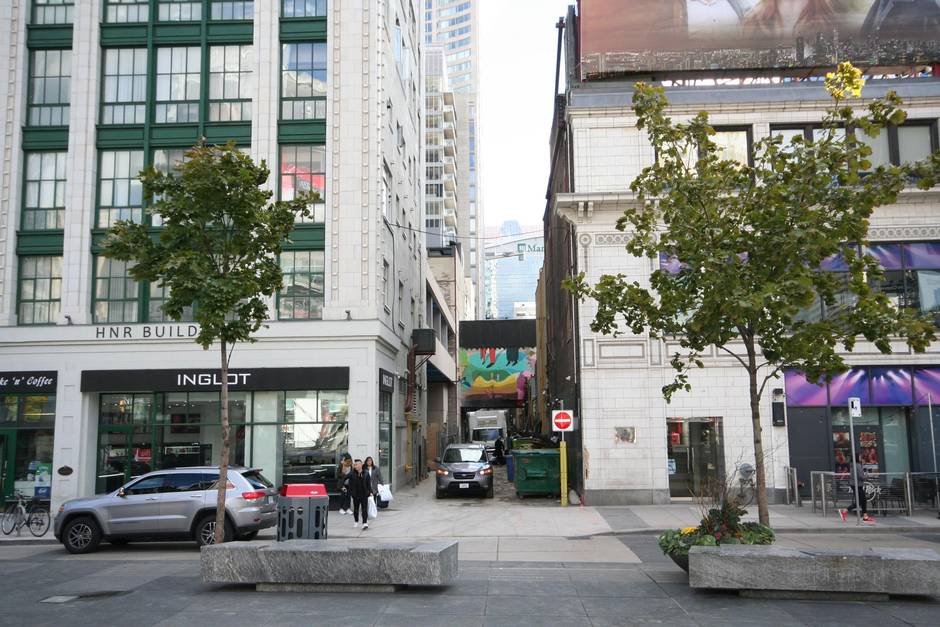 O'Keefe Lane South, one suggested location for a Toronto neon sign museum. (Dave LeBlanc for the Globe and Mail)

Video projections showing vintage footage of Yonge, Bloor, Spadina and other major arteries when they were a visual cacophony of neon, plus a projection of Ronnie Hawkins interpreting the music scene of the 1960s, could accompany them.

While Mr. Garner had initially wanted to see Sam the Record Man’s spinning neon LPs installed on the side of 38 Dundas, close to street level, the decision was made to put them next door on the roof of 277 Victoria St. They have yet to be installed.

His other choices? The two O’Keefe Lanes: the first from Gerrard Street East south to Gould Street, the other from Dundas Square south to Shuter Street and the blazing red neon of Massey Hall. Neither of these, however, offer the opportunity for a gateway building to attract tourists, and neither are as wide as Victoria Street Lane.

And tourists will come, cameras in hand, if they can find it. Last month, Buck Wargo reported in the Las Vegas Review-Journal that Vegas’ Neon Museum, which has more than 500 signs, “set a record for attendance and revenue.” 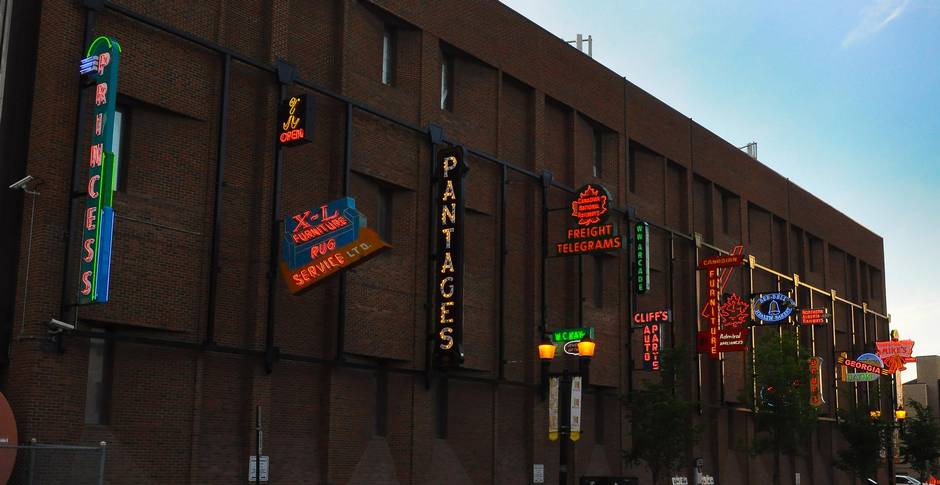 In early 2014, the City of Edmonton switched on eight restored signs on the wall of the Telus building at 104th Street and 104th Avenue to create Canada’s first outdoor Neon Sign Museum. (City of Edmonton)

In early 2014, the City of Edmonton switched on eight restored signs on the wall of the Telus building at 104th Street and 104th Avenue to create Canada’s first outdoor Neon Sign Museum. More signs followed as they were restored, and today there are over a dozen (with room for 30) in this rapidly improving neighbourhood. Many of the signs were donated by private individuals, and then restored by the Alberta Sign Association.

Here in Toronto, Sam and Jack Markle, creators of Sam’s disks and many other iconic Toronto signs, stand at the ready to restore whatever Mr. Garner can turn up. They’ve even given him an estimate of what it would cost to recreate lost signs, too: The Friar’s Tavern sign, for example, would come in at $22,000. 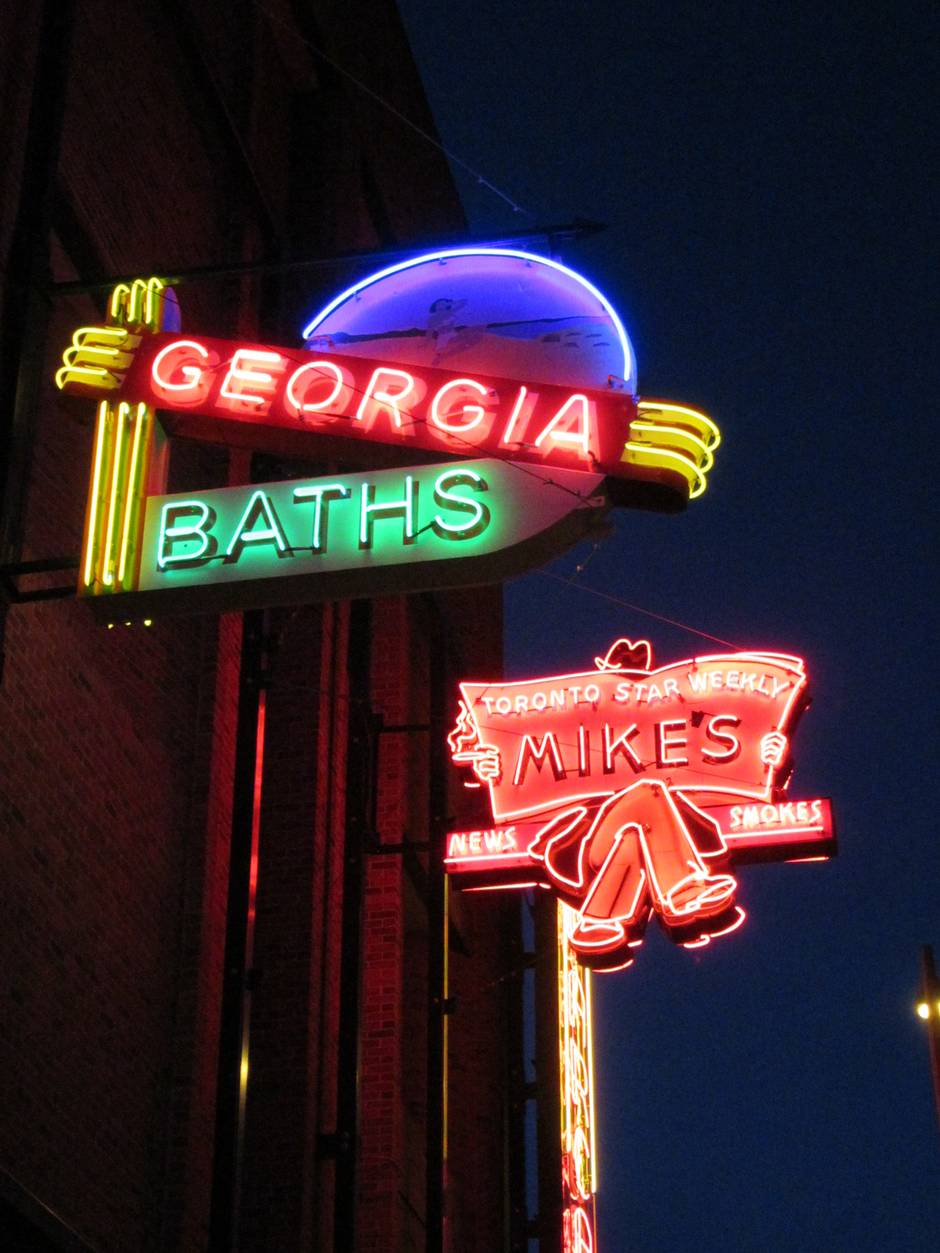 The outdoor Neon Sign Museum in Edmonton. (City of Edmonton)

If that seems like a lot, consider the hundreds of thousands of dollars condo developers pay to the city for building higher and wider than zoning allows. These “Section 37” funds are meant to improve playgrounds, build community centres, update subway stations and, sometimes, create public art installations. But that money often takes years to trickle down to street level. Of course, there are corporate sponsorships – the Edmonton project has Telus on board – but a company with an ego small enough and an artist’s heart big enough to feature other company’s neon logos (even dead ones) will be difficult to find.

Looks like raiding the lost neon ark will be the easy part after all.