It feels like being handed a list of death row inmates: closest to myself and my ravine guide, retired architect Birgit Siber, red oak No. 870, with a diameter of 110 cm; a little further down, another red oak, No. 712, sports a yellow ribbon around its 90 cm trunk; in the distance, a basswood, No. 520, with a girth of 95 cm. There are others.

Each of these leafy sentries, which have provided dappled shade and habitat to creatures in the Woodbine Avenue and Gerrard Street East area for a century, have been identified on a printout titled “The largest trees in Small’s Creek at risk of removal or injury by Metrolinx.” While all won’t necessarily be chainsawed, those on the ravine’s south wall will, it seems, be clear-cut in anticipation of the new transit expansion.

“It’s the last daylit creek system flowing into Ashbridges Bay,” says Ms. Siber as she squints into the low October sun, just visible through the leaves. As we walk, the creek burbles away to our right and, in the distance, it unceremoniously drops into a concrete cylinder. This, frankly, is not surprising, since many of the city’s creeks hide in sewer tunnels, pushed there in the name of development a hundred or more years ago. Looking back at the printout, she says: “All of this dotted line, [Small’s Creek is] all underground, so … it’s in our culverts, it’s under our schoolyards, our churchyards, sometimes our parks.”

The portion we walk, however – both on an elevated boardwalk and a muddy trail (which my dog Bella loves) – is glorious. Every few minutes, a GO Train rumbles by above our heads.

And while this sunny segment of creek won’t be pushed underground by Metrolinx, the “Save Small’s Creek” community group wants the provincial powerhouse to consider alternatives to how they’ll widen the corridor for a fourth track and create the required retaining wall that goes with it. The current plan, say the group in a community update, will turn the north side of this little oasis “into something resembling a golf course.” And, despite “repeatedly” asking for third party engineering firms to “evaluate less destructive alternatives … Metrolinx has refused.”

Well, not completely refused. Since gaining support for the cause from local city councillor Brad Bradford and Beaches-East York Member of the Ontario Provincial Parliament Rima Berns-McGown, Metrolinx has sat down with Save Small’s Creek on a few occasions, and they have agreed to reduce the number of trees to be felled (Metrolinx’s blog states it will be 268 trees: “210 within Metrolinx property and 58 outside of Metrolinx property”).

But, says the group, that’s still too many, as it “changes the ecosystem, the ecology,” says Ms. Siber, who lives kilometres away in the Beach. “Not to mention, this embankment nourishes this [valley] as well … imagine all of this is just shorn, that’s what’s going to happen in November.”

On their blog, Metrolinx states that “the least intrusive option” to widening the rail corridor is a retaining wall “made of pre-cast concrete T-Sections, which are backfilled. A chain-link fence will then be located at the top of the wall for safety and security.” Small’s Creek advocates insist, however, that there is more than one way to build a track bed. In drawings they’ve prepared, something called the “buried bridge” or “guideway” option – basically a concrete surface with deep foundations – seems to do very little to disturb the ravine wall as it requires no retaining wall of any kind.

“These kinds of things are possible to do,” with Bauer drilling equipment, says Ms. Siber; in a letter sent to Toronto Mayor John Tory, geotechnical engineer Christopher Elvidge agrees, adding that there are even alternatives to the large caissons a guideway requires “and the relatively large equipment needed to install them,” such as “large diameter” helical piers. Mr. Elvidge provides yet another solution: if the existing soil were stiffened (he notes a company called GeoSolv), the ridiculously large retaining wall as proposed by Metrolinx could be shrunken considerably, which would, he writes, “limit the disturbance of the existing vegetation and trees.”

Local resident Karolina Hordowick would be happy with either option. “We moved here when our kiddo was five-months old,” she says, emotion evident in her voice. “I think about how this has been a little pocket of happiness for kids here; you’ll see them muck about in the spring and in the fall, and it’s just a chance for them, especially during Covid, to not go insane.”

As her husband and now seven-year-old son pause to look at the water, she continues: “If you think about the 22 social determinants of health, one of them is outdoor space … it changes people’s moods and mental health state … why can’t Metrolinx just listen, I’m sure there’s a happy medium.”

And before one labels Ms. Hordowick or Ms. Siber a couple of Not-In-My-Backyarders, both say they’re all for transit expansion. Even the website, smallscreek.ca, carefully states: “We all believe in a strong transit system. We just believe there is a better way to build it that will protect our ravine for wildlife and for our community.”

As Ms. Siber and I finish our walk, we pause at the Merrill Bridge Road dog park so Bella can sniff a few furry friends. I ask her why, as a non-resident, she decided to get involved.

“From my perspective it’s a precedent for other areas in the city that are equally vulnerable; I think we have an opportunity to change our mindset about these ravine lands and wetlands, and rethink the way we deal with them.”

A wasteland in Toronto becomes a community
Subscriber content
October 5, 2021 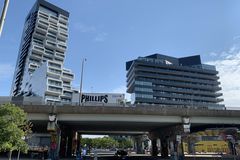 A retro motel and a taste of Frank Lloyd Wright
Subscriber content
September 28, 2021 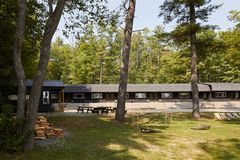 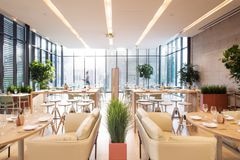