It matters little that the township of Mulmur, Ont., has boundaries; that it’s west of Barrie, south of Collingwood or north of Orangeville is irrelevant.

No, it’s the slow rising and dipping of the land, the winding concession roads, the rocky edges of stubborn Niagara Escarpment, the gullies, streams and wildflowers that count. “Unobtainium” in the city, these allow architects to unshackle, slow down … and dream.

But with such a gently unfolding landscape, one should use caution: “I’ve thought about this,” award-winning, veteran architect Ian MacDonald says quietly. “I think it’s partly because of the relatively undramatic character of the landscapes that we have to be more careful to understand the subtle nuances.” With mountains or seascape backdrops, he continues, “you just put a box and you’re done.”

For his recently completed House in Mulmur Hills 3, the answer didn’t “jump out” at him. Rather, it unraveled over conversations with his clients, over motorbike trips to the 80-hectare site to walk it and over a friendly debate over the “natural human inclination” to place the dwelling at the highest point: “Every owner I’ve ever met wanted to put their house there because you’d have a better view,” he says with a laugh.

But, in this part of Canada, surrounded by three weather-whipping Great Lakes, you’d also get blown away. So, he suggested the “bottom corner” of a big meadow and his clients agreed. It’s telling that his favourite photograph of the home shows nothing but the line of a flat roof – and a green one at that – just barely visible over tall grasses. What’s below? Who lives in such a place?

This is a house of secrets. Roll along the long driveway and plantings (which Mr. MacDonald just repurposed from other areas) shield one’s view; dip down into the home’s courtyard and be greeted by the “sacred” pile of firewood and a hint of escarpment just over yonder; enter into the “elegant mudroom” – the client wanted both an “elegant entrance” and a mudroom – and find a wood stove and an edited view of that escarpment; look up and one spies the hanging pots and pans that reveal the kitchen and suggest a living area just beyond.

“So all of these things are just little opportunities to pause and see things, and have the subtle landscape of the meadow withheld as a view.” It is Ludwig Mies van der Rohe’s “mystery of the L-shaped room,” which engages the imagination by not revealing everything at once, put directly into action.

Walk up into the living room, however, and the long curtain wall finally reveals the breathtaking, rolling meadow where endangered Bobolinks build their nests and the owners wait to trim until the season is over.

Even when tucked into the inglenook beside the Rumford fireplace where “you can spy on a rabbit or deer,” there’s yet more home hidden away: the cozy master bedroom sits at the home’s prow and an entirely separate wing contains the children’s bedrooms and noisy TV room.

A contender for a Design Excellence Award from the Ontario Association of Architects (OAA) this year, House in Mulmur Hills 3 is a delightful composition in heavy steel, concrete, big timber beams, and glass that sits as light as a feather on the landscape.

A 20-minute drive north, superkul’s Compass House, sits almost as lightly on its 80-hectare site. But instead of wearing Mr. MacDonald’s suit of corrugated galvalume to reflect the sky, architect Meg Graham has chosen cement panels painted cloud-white for her client’s peaked-roof home, which reads as a series of rural outbuildings (main house with bedrooms; separate wing for a family room and utility rooms; and a garage building).

Built in phases since 2010, Ms. Graham says her office was tasked with providing a “warm place” for their clients to land after skiing, hiking and spending quality time together. And the idea of a compass, she adds, was her client’s also: “It opens itself up in all directions and really takes advantage of the views and the wind orientation … in the summer all of these big glass windows open up and there are insect screens that drop from the ceiling.” Indeed, when opened about 20 per cent of the main building disappears, to be replaced by connections to a short patio to the north and a long “dog-run” to the south, which includes a totem-like outdoor fireplace and barbecuing area.

And instead of bringing nature inside via exposed beams, as Mr. MacDonald has done, superkul has given Compass House an interior horizon-line of nine feet: everything below is knotty-wood paneling, everything above is creamy drywall. “That’s all about the integration with the landscape,” Ms. Graham explains . “The wood, especially in summertime, it ties it into the trees … and above that, it’s all about the sky.” Real sky is welcomed in via skylights; one in particular illuminates a cozy loft/office over the master bedroom and would make for a great place to park a telescope.

“For me it’s a kind of spirituality,” she says. “That there’s this connection to the cosmos and to the landscape within the house and you can enjoy it on your own or with a whole group of people but there are always these expansive and, by turns, these more intimate moments where it’s just you and that little skylight and looking up and seeing a bird go by.”

Built to LEED Gold standards, the main building “slims itself” at both ends so that it doesn’t seem so long and the family room wing tapers at one side. In that family room wing, walls are covered in a riot of heavily-patterned plywood: “They really wanted something that was different from the rest of the house and also something that was fairly robust … it has the same effect as a figured wallpaper.”

Back in the main building, past the glass-doored fireplace – “We don’t put in open fireplaces anymore” – a long hallway connects together two guest rooms, a washroom, and two rooms with multiple bunk beds.

Set at the end of the old farm lane, Compass House, too, eschews the high ground in order to be nestled into the landscape. Viewed from a distance, the buildings are delicate, dream-like, almost fragile-looking; inside they’re hearty, welcoming and familiar. That’s why it, too, was a contender for an OAA Award this year. (Neither house won in its catagory at the awards, announced last week.)

“The test for a piece of good design to me is a sense of inevitability about its final form,” finishes architect Ian MacDonald. “It should look like it was always meant to be there, and it should be there, and there’s something right about that.” 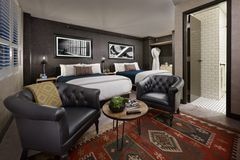 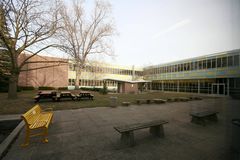 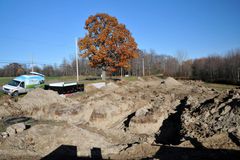