Try this any day of the week: stand beside a busy road and watch the cars. Grey, grey, dark grey, white, grey, dark blue, white; perhaps once you’ve counted 20 you’ll delight in one that’s orange or turquoise. Try it with umbrellas on a rainy day. Or winter coats. The shells people place around themselves are drab … few are the peacocks.

Sadly, the same is true with houses. But, sometimes, the front door offers a clue. Or the walls.

Wend your way along the winding streets of Brantford, Ont.’s Lansdowne Park – a garden city suburb created by Dominion Steel Co., just after the First World War to install workers in “ten types of houses … all of a quite harmonious English character” by architects Walter Scott and Lindsay A. Wardell of Hamilton (as reported in the November, 1921 issue of Construction) – and out will pop a canary-yellow front door surround by bubblegum-pink painted stucco.

Open that canary-yellow door – a talisman to ward off that cruel grey world – and a cornucopia of colour, texture, light-and-shadow, shape and decor shenanigans will delight and challenge the eye. But the world empty-nesters Philip and Georgia Mete have created isn’t frivolous; as their friend, Hamilton architect Bill Curran (of Their + Curran Architects) points out, “there is more to it than decorating … it has this otherworldliness to it,” comparing it to the Alice In Wonderland-inspired video for Tom Petty’s Don’t Come Around Here No More.

“I am no fan of citizen-designers … but this is special.”

He’s right: Open the door and scale and perspective shift as the hot pink staircase seems to lurch forward and black-and-white encaustic floor tiles meander into the background, disappearing into the distant kitchen. Overhead, a light fixture with a shade fabricated from ballpoint pen carcasses is the first of many chuckles the visitor will experience.

“I’d been looking for the right piece for here,” begins Ms. Mete, explaining that she’d seen the playful pen fixture in a design magazine but decided “Oh, I can do that” if she armed herself with a few boxes of Bics, a tiny drill bit and some Christmas ornament hooks.

“She took all the ink things out,” says her father, Ken Almas, 87. “She’s got pens for two lifetimes.”

Without Mr. Almas, it should be noted, the Mete house would have about 70 per cent less furniture. Although he spent his career as a chemist and ran a soap factory (that produced Mr. Bubble among other things), his carpentry skills are beyond that of the average amateur.

Turning right into the dining room, Mr. Almas’s pieces, such as shelving and storage, are on display along with another light fixture, this one in papier-mâché, by Ms. Mete, who recently retired as co-publisher of The Haldimand Press. On the walls, naturally, Ms. Mete has applied a Dalmatian-print via stencil on the original, slightly bumpy plaster: “It took me nine days to do that, but I couldn’t stand this room before, it was too dull for me.”

Heading into the reconfigured kitchen, it’s pale pink cabinetry with sexy brass pulls that draw the eye. On the other wall, surrounding the fridge, black cabinets play yang to the pink’s yin. To keep things (slightly) calm, walls and tile are white, and window frames a rich glossy white. The lime-green-legged table was pulled from Mr. Almas’s workroom, which was left in the house he moved into in 1966 … and it has the scars to prove it.

To the get to the formal living room from here, the Metes have created “the Hobbit door,” a slightly-too-short, arched doorway where, previously, a blank wall created a lack of flow and frustration. To enter the new addition – a sunroom or informal living room – one enters via a wider, regular-sized opening.

In the sunroom, prominent is the shipped-from-California, brand-spanking-new (but very 1960s-looking) Malm fireplace in tangerine orange. “I wasn’t expecting it to throw so much heat, I was thinking it was more decorative,” Ms. Mete says. Also of note are the low couches-on-wheels by Mr. Almas and upholstered by Ms. Mete, and Mr. Almas’s chunky, round, coffee table, which Ms. Mete decorated in a jaunty, Keith Haring-type scheme, and a sideboard Mr. Almas built using black walnut he had milled a half-century ago.

Upstairs, coziness has been achieved in the master bedroom using trompe l’oeil: lying in bed, one feels “enveloped” around the head-and-shoulders by the simple application of black paint on a small portion of each side wall and the full wall behind one’s head. In the heated-floor bathroom, playfulness is restored – whew! – by a disco ball light fixture (made by Ms. Mete) over a restored, hot pink, claw foot tub.

Down the staircase to the basement and Mr. Mete, an engineer, jokes that his sole contribution to the project – the couple moved in 3 1/2-years ago – was the jacking up and sagging beam reinforcement “with huge bolts and straps” to ensure the whole building didn’t fall over. Completely gutted by Ms. Mete and her father, this subterranean level sings with glossy turquoise floors (it took the father-and-daughter team two months to grind and prepare the dusty old concrete for the paint), a canary-yellow fireplace and a laundry room large enough for a 10-person family.

While a “serious” critic might dismiss the Mete house as just so much paint and silliness (that critic probably drives a grey sedan), there are those who will see past paint to the elbow grease, creativity, and joy at work. And it’s those folks, ultimately, who make the world a more joyful place.

A 1960s survival in a renovation-crazy culture
Subscriber content
March 16, 2021 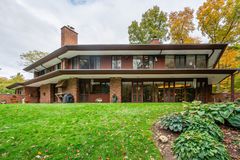 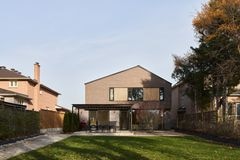 Lawrence Park house has complex mathematical curves on the outside, with human touch inside
Subscriber content
March 2, 2021 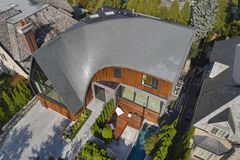