Oh, what a wonderful world these walls have witnessed: the ray guns and rocket ships of Buck Rogers in the 1930s; the jungle-scapes and beating bongos of 1940s Tarzan; the melodramas and musicals of the 1950s. In the 1960s and 70s, nothing but Italian was spoken here, and, in the 1980s, an altogether different “language” when it was Eve’s Paradise, a pornography house. In 1990, these walls (and seats and screen) became part of the Festival chain of repertory houses.

In 2006, the Paradise Theatre’s screen at 1006 Bloor St. W. – a site that’s hosted a theatre of some sort since 1910 – went dark. After a brush with demolition seven years ago, these walls are now witnessing scaffold-building, hardhatted workers brandishing power tools, interior designers with measuring tape and the buzz of anticipation that always accompanies a rebirth.

Designed in 1937 by Toronto’s first registered Jewish architect, Benjamin Brown (1890-1974), who also designed the two gateway towers to the city’s Garment District, the Balfour and Tower buildings, this flashy, art deco movie house was a neighbourhood escape from workaday life. After embellishments by architectural heavyweights Harold Kaplan and Abraham Sprachman a few years later, the 643-seat theatre was even more escapist than its smaller cousins down the street (remember, in those days there was a “nabe” every few blocks).

Unfortunately, the way people consumed movies changed toward the end of the 20th century. In the 1980s, theatres that were large enough were cut up into multiplexes, some with screens no larger than today’s flat screens. In the 1990s, many closed owing to video rentals. Those that survived were façaded, such as the University, or turned into event spaces, such as Kaplan and Mr. Sprachman’s glorious Eglinton.

But event spaces have a way of dropping off the radar; if one isn’t invited to a wedding or corporate event there, they’re erased from our collective mental map of the city. “They become closed shops,” said David Thorek, Paradise’s new director of operations. “Fiscally speaking, a single screen theatre house, it’s very difficult to make a profit off of that.”

Standing amidst the dusty, yet co-ordinated, chaos that’s pushing to have doors open for new owner Moray Tawse by the end of the year, Mr. Thorek promises the Paradise won’t drop off anyone’s radar, since a restaurant will take up residence in the long portion of the building running along Westmoreland Avenue. Called Osteria Rialto, it will bring life to the street via a new, all-season patio and the second floor will feature a roof deck overlooking Bloor Street.

Inside the theatre proper, Mr. Thorek adds, there will still be movies, along with other non-exclusive events, such as comedy nights, speaking tours and musical acts. “First year, let’s find out who we are,” he said. “Let’s put our programming out there, see what happens, learn from our audience, learn from what’s working, [and] tweak our programming.” While he admits closed events and “buyouts” will be a small part of the calendar, they won’t be the focus.

If that sounds similar to what’s happening 65 kilometres to the west at Hamilton’s Westdale Theatre (reported in this space in July, 2017), that’s because it is; to make these old movie houses viable today requires a group of cheerleader/risk-takers with deep pockets (or in the case of the Paradise, just one set of pockets), combined with nostalgia, a love of old architecture and 21st-century programming for a fickle audience.

And speaking of architecture, there are other similarities: much like the 2010 restoration of the Allenby Theatre at Danforth and Greenwood Avenues (reported here in October, 2010), which saw the reproduction of an original marquee, ticket booth and speed-stripe cladding, heritage superheroes ERA Architects are handling these elements at the Paradise. Inside, Solid Design Creative will outfit the lobby and restaurant spaces with a modern take on art deco, which will include a theatre-style sign (the kind with sliding plastic letters that spell out movie show times) over a long cocktail bar on the second floor.

“And that marquee, you will see from outside, down on the street,” said Daliah Marsons of PR firm Rock-It Promotions.

“It’s very bright,” Mr. Thorek said. “You’ll be able to see this bar from any angle coming.” Good, since places such as these need to stir the hearts of locals to stay afloat.

The journey to bright bars and reproduction speed-stripes hasn’t been easy, however. In the almost three years this project has been active, the team has dealt with asbestos in walls and even inside decorative columns (which could not be saved), the removal of lead paint and a leaky front wall, which necessitated removal of the city sidewalk for waterproofing. And because the replacement sidewalk ended up higher than the theatre’s original terrazzo apron, it will have to be jackhammered out (to allow for proper drainage). Once the theatre’s floor is raised however, a reproduction of the circle- and bar-pattern will be constructed, albeit with a change to the colour scheme.

“It’s been a lot of work,” Mr. Thorek said. “We’ve had to push back our opening date several, several, several times … we do have a couple of shows booked for December.”

And, when the Paradise does reopen, these (new) walls will witness happy customers sipping cocktails, watching movies and laughing at live shows. “There’s something special about the communal experience, especially in a heritage space like this one,” said Mr. Tawse, the owner. “I look forward to [the] Paradise continuing this proud tradition for another hundred years.”

Renovation takes the gloom out of Beaches home
August 3, 2018 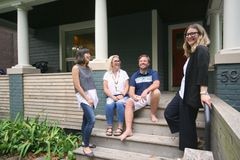 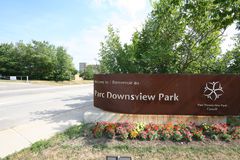 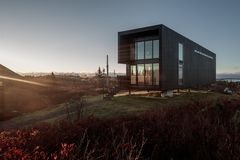