There is more than a little anticipation as Donald Mackinnon’s garage door clicks and clacks its way out of view. Earlier that day, you see, architect Melodie Coneybeare had hinted that this new garage extension had been designed to accommodate a very special automobile.

Would it be a Ferrari Dino? A mint condition 1957 Bel Air? A shiny DeLorean?

“It’s the first car I ever bought,” says Mr. Mackinnon, as the door mechanism finally silences itself. “I’ve rebuilt it once, down to every nut and bolt, maybe 20 years ago, and I’ve probably rebuilt half of it since then.”

The 1974 Mini above our heads is quite something. Even with this chassis-only view, one can easily discern that this humble, workaday automobile has become – with much love and care – greater than the sum of its parts.

This is also reflected in the house that surrounds it: While humble and one of millions built during the postwar era, this 1961 Etobicoke bungalow has been completely redesigned by Solares Architecture to suit this active, blended family of six, which includes wife, Jennifer Leedy, who until recently did marketing for an architecture and engineering firm, and four children (two in their late-teens and two in their 20s).

“Donald has two kids and so does Jen so they wanted a space where they could be, now, a family together,” Ms. Coneybeare says. “They were trying to figure out how much space they needed, where that would be, and so they sat with these big numbers for around a year, and then they came back to [us].”

The big numbers considered a completely new build, a new purchase, or the redesign of either Mr. Mackinnon’s or Ms. Leedy’s home. Since it had more square footage and a massive, ravine-kissing backyard, the couple chose Ms. Leedy’s. But being a “typical bungalow” of the postwar period meant that the common areas were small or relegated to the basement, and the bedrooms dominated the main floor.

“So you walked in,” Ms. Leedy says as if reading a boring laundry list, “and living room; L-shaped dining room/kitchen; bathroom; master; bedroom; bedroom.” And, worse, the bedrooms faced the ravine, so nothing but tiny punched windows that thumbed their noses at that wonderful view.

The solution? Down to the studs on both the main floor and the basement (which had been finished and had a good ceiling height, but still didn’t address the ravine) and rebuild this workaday home into more than the sum of its parts. The main thing, of course, was to demote all but the master bedroom to basement status in order to transform most of the main floor into a great room or kitchen. But building a great room with a ceiling height great enough to allow great gobs of sunlight inside was not an easy thing to do with a hip roof.

“It was really a design challenge for [Revive Contracting] to make custom trusses to support the load,” Ms. Leedy recalls. “I don’t remember what it cost but Donald [said], ‘Do you really want to do that?’ and I said ‘Absolutely!’”

Today, that 12-foot ceiling, the sexy, black-framed, twinned windows drinking in that lush view, and the skylight over the custom kitchen combine to create an inviting space that has more in common with Palm Canyon Drive than Rathburn Road. And if the mid-century mecca of Palm Springs doesn’t immediately spring to mind while standing in the Leedy-Mackinnon great room, a glance over at the custom stair balusters – all geometric and lined up like sentries – just might.

Or perhaps the new front elevation will? While many of its neighbours have relatively flat façades, here the six-foot garage bump-out necessitated a new, projecting roofline. So, why not place a mono-pitch up there, and then another, at an opposing angle, over the front door to create a Palm Springsian look? And also why not punctuate the composition with a pin-holed hourglass fixture and a turquoise front door with a sidelight?

“We thought that was a good opportunity to add some asymmetrical balance, clean it up, and really bring the mid-century vibe,” confirms Ms. Coneybeare, who also collects mid-century modern furniture for her own home.

Even the basement level feels open and airy, despite holding four bedrooms (one of which is now a video gaming room since one of the four is off to university), thanks to a careful consideration of space. At the bottom of the stairs is a flexible area Ms. Leedy uses to practice yoga, meanwhile an extra-wide hallway allows for multiple bookcases and bicycle storage.

One interesting feature down here is the “family style” bathroom. Anticipating times when two or three young adults would be vying for ablution space, the sink, toilet and shower have been compartmentalized via pocket- or traditional doors.

“That was Jen pushing us to do that,” Ms. Coneybeare says with a laugh, “and it worked.”

Other things the couple pushed for were solid-core doors throughout and the full-walnut kitchen (Ms. Coneybeare had suggested lighter upper cabinets).

They also aimed for extreme energy-efficiency, since bills can go north pretty fast in a six-person household. With Solares Architecture being known as sustainability leaders, the Leedy-Mackinnon house now has fewer air exchanges than new construction, “and my gas bill went from $300 a month to $49 – and teenagers, do you know how long of showers they take?” Ms. Leedy says with mock exasperation.

Long showers aside, that Mr. Mackinnon and Ms. Leedy now have the perfect dwelling for their shared hopes and dreams – and that 1974 Mini – justifies the $600,000 construction cost. 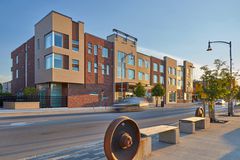 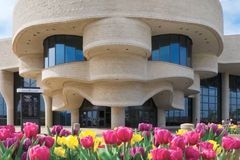 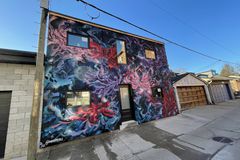