Nadia and Nick Thomas didn’t want to live in a semi-detached house ever again. In 2015, the couple was sick of their old semi in Toronto’s west end where everything their neighbours said, did and argued about reverberated through a common wall. They were tempted to move, but the city’s soaring housing costs kept them in place. They knew that a fully-detached home in their tree-and-park filled area would be out of budget.

Then in 2016, their long-time friend, architect Kyra Clarkson, gave them an enviable means of escape. Clarkson runs Modernest, a design-build development business that buys tumble-down, urban infill properties and puts up custom-looking modern homes at less than custom prices. The average cost a square foot is $375, which includes design, coordination, project management, permitting and construction (land tax and HST not included). That might be higher than a typical, cut-and-paste home, but it’s modest considering the level of detail: Douglas fir window frames, white oak millwork and not a single bulkhead to mar the flush, flat walls and ceilings.

Clarkson’s latest find had everything the Thomas family could want. It was close to where they were living, near a park, on a south-facing corner that would allow for sun-catching windows on three sides (not just the front and back as is typical with narrow downtown sites). The issue was that Clarkson wasn’t just looking at one lot, but two, side-by-side places with such tight footprints that a semi was a necessity.

Buying into the project had its benefits – “putting up two houses at once allowed us some economies of scale,” Ms. Clarkson says, making the construction more affordable. Committing to the project so early, before Ms. Clarkson even closed on the land, would also allow the Thomases to customize the design in ways that would have been impossible to do if they had waited until the house was finished and listed on the Multiple Listing Service.

The couple, however, balked. They were adamant that they didn’t want a semi, no matter how much they liked the Modernest aesthetic. Which they did, quite a bit. “We’ve always followed and been fans of Kyra’s work,” says Nick, noting that they had toured two of the four previously built Modernest houses, including the one where Ms. Clarkson lives herself with her partner, Christopher Glaisek (both graduates of the Yale School of Architecture).

Now, standing outside their newly completely house, which appears to share a common wall with a nearly identical, conjoined twin, it looks as if the Thomases compromised on their No. 1 wish. And who would blame them? The two houses together are handsome – clad in elegantly arranged, black pine slats, accented with honey-coloured fit doors, windows and soffits. Mature trees, carefully protected during construction, spout up from the Thomases yard, as though the house had always been there.

Appearances, however, can be deceiving. To ensure her friends’ happiness, rather than a common wall, Clarkson took the additional step (and added expense of more than $30,000), of separating the two homes, with different exterior walls and foundations, by exactly one inch. “They are completely fire separated and acoustically separated,” Ms. Clarkson says. “But we closed the gap at the ends with some cladding so you can’t tell from the street. Also, so that no rodents or insects make a home in the gap.”

In addition to the sound separation, the Thomases customized their layout in other ways. The ground floor is similar to many Modernest projects, with an open-concept, all-in-one, dining, kitchen and living room, with beautiful white oak cabinetry and floors throughout as well as a minimalist, all-white fireplace.

On the second level, the Thomases opted to shrink the bedrooms of their two kids, with just enough space for closets, beds and big windows overlooking the trees outside. There are no desks or TVs. “My father is an architect,” Mr. Thomas says. “And that was a principal he raised me with; bedrooms are just for sleeping. Otherwise, I really wanted to bring the kids out of their bedrooms and into shared family spaces.” As such, the rooms butt-end a den with built-in bookcases, a deep window seat for reading and a table for crafts, colouring and homework. For more casual pursuits, a second den, in the basement near a guest bedroom, is set up for TV and board games.

The master bedroom is also customized. The sleeping quarters, ensuite and walk-in closet are sandwiched between two private terraces – one facing east for morning sunrises, the other west for sunsets. “You get totally different views of the city from each,” Mr. Thomas says. “One faces trees, the other towers.”

“You can never get bored with this house,” Ms. Thomas says, “because wherever you look, and at any time of day, the sun is changing, the light is changing, you see something different.”

In keeping with the Modernest concept, though, not everything was either altered or ever alterable. “On a truly custom project, we’re meeting with the client every three weeks,” says Ms. Clarkson, who also takes on bespoke commissions. “There are a lot of decisions to be made. With a Modernest house, there’s a limited range of decisions. The homeowners don’t have to look at a million shades of white; we limit the choices to a few.”

That suited Mr. and Ms. Thomas well. They are both busy professionals and didn’t have the time or brain space to mull over every colour, finish and piece of hardware. “We only had to make about as many choices as we could handle,” Mr. Thomas jokes.

“Everything came together so smoothly,” Ms. Thomas adds. “We didn’t have to worry about anything, which was nice. And now that we’re in, we couldn’t be happier. The house has made our lives better, and isn’t that what good design is supposed to do?” 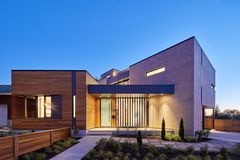 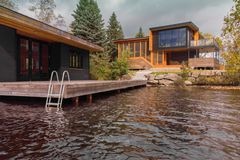 A Victorian renovation, done back to front
Subscriber content
August 16, 2019 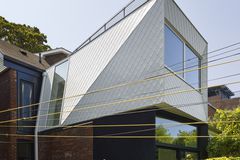