Architect Philip Evans is standing at the exact centre-point of a building site at the southeast corner of King Street West and Blue Jays Way in Toronto. Above his head, two condominium towers – one rising 44 storeys the other 48 – are mostly complete; in fact, Uber Eats couriers and furniture delivery trucks interrupt the pedestrian flow regularly on this Tuesday in late August.

But it’s this steady flow of people, bicycles and vehicles at ground level rather than the tall towers of “King Blue” that has his attention. Once temporary construction fencing is removed, openings in the complex’s podium will allow pedestrian-only access from the north and south, and mixed-use access to the east and west. The east-west corridor, Mr. Evans explains, was a city-owned laneway that the developer, Greenland Group, was allowed to incorporate into the plan since the city was “pushing” for more activity and life there.

“This is a quadrant idea,” he says as a jogger leaves the glassy lobby for an evening run. “So you have the four main quadrants of the site all coming together in this courtyard, and the idea is that everybody would have some kind of address, or some way of facing this courtyard, which is a new, unique feature to the block. … I can’t really think of many spaces like this, intentionally.”

Not only does this intentional, cross-shaped path create a new, sheltered, and urbane approach to city living, it allows residents and hotel guests to get up close and personal with a relocated “Westinghouse” logo that once sat 3½ storeys above the sidewalk.

“Isn’t this great?” he asks rhetorically as he runs his finger along the ‘n.’ “You can see the quality of this: It’s not washed out, it’s not rubbed away. … We had such a light touch on this.”

Made of glazed terracotta (just like the long, cream-coloured bands that trace the windows) the letters were saved during the controlled demolition of the 1927 building, which saw two of four façades retained, in situ via a steel cage, while the rest was cleared away for new construction (a three-storey building in 1927, three more floors were added in 1934-35, and if one looks closely the transition is apparent). And while many in the heritage community might see this as a loss, Mr. Evans offers that, save for steel beams, wooden floors, a freight elevator and a “modest” bit of tile in the foyer, nothing from the 1920s remained. So, he adds, better to consider how our city, during the incredible construction boom of the last two decades, is allowing for new building forms to emerge.

“And, also, what story do we want to tell on this site?” he asks. “I think the story about this area, it started with all the fine-grained retail shops, you’ve got restaurant row over there … and then [those types of buildings] were replaced with large warehouse structures like this.”

And it’s not as if Greenland, a Chinese developer new to the Canadian scene, didn’t jump through additional hoops to save what they did: “If you were to come into this country and take on a more complicated project, you really couldn’t,” Mr. Evans says with a chuckle.

To wit: The 30,000 bricks that were preserved make this the largest façade-retention project in North America, according to Discovery Channel; the infrastructure underneath King Street was so complicated Page + Steele/IBI Group had to “switch the strategy to an incredible series of micro-piles” to needle through it all; and, simple as it sounds, Mr. Evans says dropping the ground floor of the Westinghouse building a half-metre so it would sit flush with the sidewalk was a huge, and expensive, undertaking, but necessary for accessibility. Add to that the high quality of the slim, steel window frames (made to mimic the originals) and it all adds up to a “super-fantastic job” that adds to the pedestrian experience.

“Taking on the Westinghouse restoration as Greenland Group’s first-ever project in Canada was admittedly ambitious,” agrees Liwen Deng, director of construction and contract, “but it was important to us that our first development contribute the fabric of the city in some way.”

Westinghouse, one must remember, was once a huge part of our cultural fabric. Headquartered in Hamilton, in 1920 the company would produce the world’s largest hydroelectric generating units for the Queenston-Chippawa Station at Niagara Falls. And by the 1930s, their name would grace everything from refrigerators and radios to electric locomotive engines and lightbulbs. By 1955, with a Hamilton workforce of 11,000, the company would be second only to Stelco. Such was Westinghouse’s might that the same architect, Pittsburgh-born Bernard Prack, designer of the ornate, 1917 office tower on Hamilton’s Sanford Avenue North, was called upon to design the Toronto building (read about the transformation of the Hamilton building here).

Classical in style and with rare (for Toronto) appliques of glazed terracotta, the Westinghouse building still “reads” as an independent object rather than a pasted-on face thanks to the tower step-back that allows for a full roof (an example of a pasted face would be John Lyle’s studio on Bedford Street north of Bloor Street). And, with the new pathways, it offers a small gift of relief to Toronto’s increasingly crowded sidewalks.

“Every time I go into the courtyard I think: look at how people are using this space!” Mr. Evans says with a smile. “We don’t have this in our vocabulary of urban spaces.” 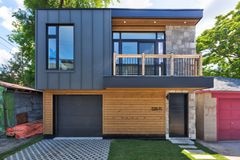 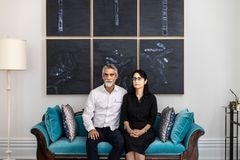 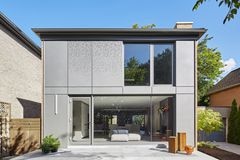