Just down from the road from the LCBO, the Royal Canadian Legion (Branch 159) and an antique store, the most prominent corner in Cayuga, Ont. (population 1700), boasts a sparkling new addition.

Where Talbot Street West – also known as Highway 3 – bisects Cayuga Street into north and south, the new Haldimand County Library and Heritage Centre sits, beacon-like, and attracts patrons from nearby Fisherville, Sweets Corners, Canfield Junction and Empire Corners. And these farming communities south of Hamilton clearly weighed heavily on Hamilton architect Bill Curran’s mind as he and his staff put drafting pen to paper, figuratively speaking, a few years ago: “Small towns tend to be more conservative, and also in a small town, with the building committee you’re under a lot of scrutiny … so they were very concerned about their reputations and delivering the right thing,” says the affable, white-haired architect, who could pass for comedian Steve Martin’s younger brother.

“So, yeah, I’d say it definitely can be harder to work in a small town than in a big city, to advance more unusual architectural ideas, but they trusted us and they went for the walk with us.”

Right now, Mr. Curran and I are walking the circumference of this handsome building, but despite the interesting choice of cladding, his mind is still on those farmers. “It’s all about the river,” he says, pointing to a stand of trees that block our view of the Grand River, about a hundred meters away. “This was a navigation hub on the Grand River, before the railways, and there were locks on the river; this was the regional banking centre for all the farmers.”

It’s why Their + Curran Architects chose a rough, hand-cut, red brick from Ohio along with corrugated metal siding for that cladding. The brick, laid in a common bond pattern, echoes what’s found on the columned-and-pedimented law office across the street, as well as the row of retail buildings along Cayuga Street North. The siding, he says, is “a very good reference” to the grain silos, barns and storage buildings dotting the landscape.

A few things, however, mark the library and heritage centre as thoroughly modern: The pronounced, ship’s-prow-like roof overhang on the western side, which associate Kyle Slote says was one of the project’s “most complicated details”; the giant window wall that dissolves the building’s corner underneath; and the jaunty, jazzy quartet of rectangular windows to the left of the window wall. Peek inside a few of those windows, and the sexy, Italian “Big Bang” light fixture by Foscarini also suggests that this is a place unlike anything Cayuga has seen before.

Finally arriving at the door – “We fought hard to have a front door on the street,” Mr. Curran says, adding that it’s expected most patrons will arrive by car and use the eastern entrance – and of interest are artifacts on display in a small window to the right. The handiwork of Haldimand County Museum & Archive’s Karen Richardson, who formerly curated a much smaller space in a much older building, these pieces hint at what’s to come in the generous, bright and airy space that houses the collection now.

So, if one isn’t in a hurry to check out the latest Stephen King novel, a quick pivot to the right gets one lost in Ms. Richardson’s display cases filled with everything from a surveyor’s chain, bootjack and carpenter’s compass, to an old typewriter and a mastodon tooth. Look up and one is rewarded with paintings, a spinning wheel, barrels and an old hotel door that was lovingly restored by Dundas-based heritage expert Alan Stacey. (Of course, one might be here for a meeting of the ukulele club, which meets in the flex space to the left of the front door.)

“I found a ledger and it contained a lot of the information of what some of the first donations were [in 1933], and that’s what you see here,” Ms. Richardson explains. “That’s why it’s very eclectic.”

And speaking of eclectic, that the library and the museum have peek-a-boos into each other is no accident, Mr. Curran says: “When you’re tight for space you have to make use of every cubic foot; that’s why we snuck in displays everywhere we could … the ambition for the building was far beyond the square footage that was available, and money, as always.”

There was ambition to eschew the “spare and sterile” look of many modern buildings by adding colour via big wall graphics (by Jamie Lawson of Poly Studio, which remind this author of the work of American illustrator Charley Harper), by creating visual interest by leaving the roof trusses exposed (and, indeed, adding well-placed skylights to light them), and creating a funky children’s reading area full of hidey-holes, colourful upholstery, jellybean-shaped light fixtures and storage cubbies.

“During the design process, I made blanket forts with my kids and took measurements to find the optimal space that still felt child friendly, but could accommodate adults as well,” Mr. Slote remembers. “The times I’ve visited the library, these are nearly always in use.”

Other cheap-and-cheerful touches, such as a teen area banquette with a wooden slat roof that mimics that of the building, a coffee station for patrons and carpet “planks” that allow for a herringbone pattern, mean this is a building that may look expensive, but actually came in at a very reasonable $400 a square foot.

While it might seem as if the future landed with a thump at Cayuga’s most prominent intersection to a certain segment of the population, it’s a thoughtful, handsome future that blends many functions as effortlessly as it nods to the past while looking forcefully ahead. And, besides, finishes Mr. Curran: “We’re not designing for the 60-year-olds of Cayuga, and the [staff] are already telling us it’s a huge success.” 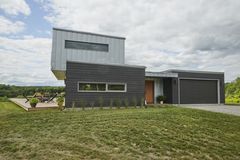 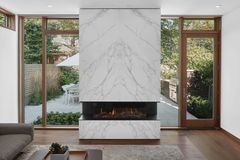 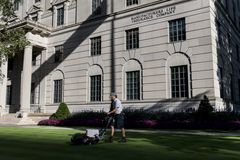