On clement days, the population swells from a few, smoke-breaking restaurant workers to gaggles of giggling, photo-snapping tourists.

Running behind Toronto’s Queen Street West from Spadina Avenue to Portland Street, “Graffiti Alley” is perhaps Canada’s most famous laneway. Google Maps rates it 4.5 stars (based on 1,450 reviews as of this writing), and suggests that 4 p.m. to 5 p.m. is busiest, most days, so crowd-less selfies might take a while to compose.

In July, 2017, with the help of 20 female-identified artists and the city’s StreetARToronto funding program, Ms. Kezwer transformed a Parkdale laneway during the inaugural “Womxn Paint” jam, which saw more than 2,000 square feet of murals painted – with building owners' permission – over three days.

On Aug. 19, aerosol lids were snapped shut on the bigger, better 2018 version, which took 10 days to complete. Under the “Uplifting Each Other” banner, 30 artists covered 4,225 square feet just above Dundas Street West, in a winding laneway connecting McCaul and D’Arcy streets, a stone’s throw from the Art Gallery of Ontario.

And while the results are definitely uplifting and colourful, the idea came about during the shortening, dark days of late 2016, said Ms. Kezwer, 33, who left a job in public relations three years ago to pursue fine art full-time. “The switch really turned after Donald Trump was elected and I just felt like I had to do something to speak about gender inequity. But something that would be warm, and something that everybody could relate to, and it wouldn’t get people’s defences up … I think art is such a great way to start those conversations.”

There are plenty of conversations that can be had while walking Toronto’s newest graffiti hotspot, such as the joy or trauma of motherhood, body positivity, and indigenous or elderly rights, to name but a few.

Her eyes shining from behind novelty, “paint-drip” sunglasses, Ms. Kezwer pointed to a piece by Gosia Komorski – blue swirling hair and meditative poses by mother and baby – as “a tribute to the experience of motherhood.” To illustrate the opposite, a private home facing D’Arcy Street now displays Aura and Chief Lady Bird’s haunting portrait of an indigenous woman with Tahlequah the orca carrying her dead calf placed right where her heart should be. And, quite serendipitously, a gas pipe the artist wasn’t allowed to paint over seems to pierce the woman’s throat: “Super powerful,” Ms. Kezwer said.

For body positivity, the silhouettes-of-all-sizes mural by Erin McCluskey – a riot of dancing, swimming, flying, proud women in an explosion of turquoises, yellows, golds, and pinks – shows that joy is not the exclusive property of those who wear size six and under. “I think she did an incredible job; it’s got so much movement and amazing colour, and she really mastered the scale,” Ms. Kezwer said, adding that this is Ms. McCluskey’s first wall-mural, and her first time using aerosol paint. The jury liked this piece so much, they used it for promotional purposes.

Ms. Kezwer explained that, while she chose the alley (a daunting task, when one considers permissions, width, paintable walls, pedestrian access, proximity to attractions/restaurants, etc.), it was a five-member team who reviewed the 56 submissions, based on technical ability and strength of concept. Painting style and ethic/social background were also considered.

However, that didn’t mean one had to be a seasoned professional, she stressed. “It’s like when you’re getting a job, everybody wants the [candidate] with experience.” To wit: A mural painted on a section of wooden fence was done by Jei Escalante, a high-school graduate who will be attending OCAD University in the fall.

This, Ms. Kezwer said, gives women artists something to place on their CVs, as well as adding women’s stories to the street. “Our urban landscape is dominated by male perspectives. I think architecture, at least up until the last 50 years, was almost 100 per cent men.”

So it’s been difficult to showcase other points of view, she added, “especially from diverse women, women of colour, indigenous women.” This is laid bare in her own mural, painted with the artist “Muisca.” It showcases tropical plants on a field of pink as giant letters spell out: “GROW THROUGH WHAT YOU GO THROUGH.”

Ms. Kezwer has certainly grown as a community organizer. Since last autumn, when she began the search for an alleyway (she was leaving the AGO’s Yayoi Kusama exhibit when she spied a garage door peeking from between two houses), it has taken about 150 hours to canvas home- and shop-owners, share images of last year’s work with them, clean the alley of junk, and prime the walls of existing tags. Despite a few owner rejections (which means blank spots in the alley), incredible relationships now exist between Dundas Street art galleries, restaurants, homeowners, and emerging artists; in particular, talent agent Edna Khubyar gets a shout out for sponsoring the closing party and for giving artists access to her restroom during the painting.

“Many of the neighbours have become friends,” Ms. Kezwer said.

So, as days grow shorter and the clock runs out on summer’s lushness, those who need a pick-me-up would do well to seek out Dundas and McCaul … it may even stimulate some important conversations.

Graffiti in Canada is alive and well. And we do mean alive
October 2, 2013 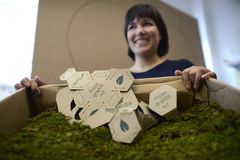