“It kind of feels like A-frames are having maybe a bit of a moment right now,” designer Nathan Buhler says as he squints up at the blazing sun, currently baking the ground around a fine example of one an hour northwest of Toronto in Caledon, Ont.

As the property’s two dogs lazily plop down in a patch of shade, Mr. Buhler and his former partner at BLDG Workshop, Jorge Torres, point to the roof over the building’s front door. Mr. Torres, who now works in construction, says a lot of “in the moment decisions,” such as slicing away sections of the generous roof overhang on the A-frame’s two wings, defined this renovation project, which left the home’s original 1984 footprint intact.

“The way the home’s used is really the same as it was,” Mr. Buhler says. “It’s just that it took a deep, Modernist cutting tool to make it what it is.”

There is a little irony in that statement, considering the home’s original architect was one of Toronto’s great Modernists, Leo E. Venchiarutti (1922-2007). Born to a house-building father, the 1947 University of Toronto graduate had a design for an A-frame featured in Canadian Homes and Gardens magazine as early as 1951, before his progressive, non-A-framed house designs went up at the Modernist-only “New Town” of Don Mills in Toronto (along with many other architect’s designs) and a home he penned for Robert and Signe McMichael (of McMichael Gallery fame) was built in Kleinberg, Ont., in 1954.

Then again, a good architect listens to their client, and, by 1984, the airy, California-style, open-concept of the fifties and sixties was jettisoned as folks went back to small rooms with small windows … well, save for the majestic window-wall that graces both sides of the A-frame portion of this beauty.

Perhaps that’s why, when current owners Jeff Turner, 53, and Sheena Smith, 54, would mountain bike or hike past the house for the decade-and-a-half before they purchased, there was still intrigue.

“We always wondered what it was like inside,” Mr. Turner says.

And that’s why, when the house came up for sale in 2013, the couple arranged to have a look – despite being a month away from breaking ground on a brand new Bldg Workshop-designed residence a few streets over.

“Absolutely not,” Ms. Smith remembers deciding after seeing the dark, untouched, Dynasty-era interior. Mr. Turner, however, wasn’t so hasty with his decision. He asked Mr. Buhler to weigh in on the “not great layout” and, three days later, with Mr. Buhler’s sketch in hand, the couple made an offer even though it meant completely gutting the place and abandoning their new build.

But what results! Where the majestic height of the A-frame’s peak was once hidden, that airy, bright feature can now be glimpsed upon entry into the foyer. Straight ahead, where there was once a dark, shoehorned-into-the-corner kitchen, now a long island and shiny white cabinets invite guests to see what’s on the stove. To one’s right, in the A-frame portion, textured barn board has replaced bulky field stone on the fireplace surround. This, Mr. Turner says, was his decision, as the field stone added “a foot” of width and he wanted less visual impact.

Walk to that fireplace and one can choose to park one’s bottom at the rustic dining table at one end of gabled room, or, past the old spinning wheel, on the space age George Nelson Coconut Chair at the other end. If there is a little irony in that statement, too, that’s because there are two very distinct interior design styles at work here … well, three if you count Eddie Cimbron-Corner of C2-interiors, who helped the couple achieve their vision.

“I am absolutely the minimalist,” Mr. Turner says.

“Everything that’s broken in the house is mine – the antiques as he puts it,” Ms. Smith says about her partner.

The thing is, with two wings – one for kid’s bedrooms and kid’s media room and one with foyer, kitchen and master bedroom – and two levels in the A-frame portion (the upper floor contains a home office), there is plenty of room for shabby-chic and minimalism to co-exist. Even the couple’s art, which ranges from rusty oil-can-lid collages to paintings of farmhouses, has plenty of wall-space to breathe.

And about those walls: During the gutting process, the team uncovered clean, structural cinder block, so it was decided to keep parts exposed and to “hang” new drywall over top. In the A-frame portion, the previously buried lower portions of the gently curving glulam (glued laminated timber) beams are now highlighted against that cinder block and “framed” by the new drywall. In the dining area, Ms. Cimbron-Corner left the ceiling joists exposed and had them painted out in bright white. All of these design moves give the building a big city, open loft-like look, while the meandering floor plan still allows for discovery.

As for the floors, all had to be raised to meet the kitchen’s, which originally sat six inches higher due to the Reagan-Gorbachev-era bomb shelter in the basement, complete with an underground tunnel that (may) still lead escapees into the forest.

“Since the start of this [project], I’ve always told Jeff I’m going to crawl through there, but I still have never done it,” Mr. Buhler says with a smile.

Editor’s note: (Aug. 6, 2020) An earlier version of this article incorrectly said Nathan Buhler is an architect. 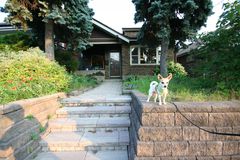 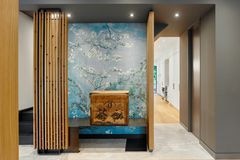 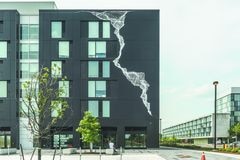