It’s certainly not a requirement, but, if you ask me, the best way to prepare oneself for a day admiring beautiful architecture is to sleep in it the night before.

And architect Robert Lemon’s “Seven&Nine,” formerly the Stratford, Ont., home of restaurateur Jim Morris, is certainly beautiful. Designed by the Toronto-based power-couple of Brigitte Shim and Howard Sutcliffe in 2001, the award-winning building addresses its challenging, tight lot – it’s hemmed in by taller buildings on either side, one of which approaches at an angle so severe it looks as if it might strike it – by proudly rising three storeys and presenting a calm countenance of smooth asymmetry, transparency, and opaqueness to Cobourg Street.

Inside, with a cool concrete-walled dining room, a koi pond kitchen, an M.C. Escher-like series of stairs (but the non-dizzying kind) leading to levels and half-levels, a living room overlooking Lake Victoria, a bridge to the master bedroom, and a “vertical wooden light court” dominating the middle of the floor plan, one cannot help but feel energized upon locking the door and bounding down the ramp to see Stratford’s other architectural delights on a sunny, late-September morning.

St. Thomas, Ont.-born Mr. Lemon, now retired, spent most of his life fighting the heritage good fight in Vancouver. But, since he recently purchased the Shim-Sutcliffe house, and an adjacent restaurant, he has been renting it out to other architectural aficionados while preparing to relocate to Stratford (he plans to turn the former Rundles restaurant building into additional rental suites), he offered it up to this writer for two nights along with a wonderful 12-page “architour” of his own creation.

He starts with an explanation of the city’s “Y shaped layout,” and how each branch of the Y – Erie Street, Ontario Street and Huron Street – point to their lake namesake. “The nexus of the three spokes,” he writes, “is a public square in downtown” that also “gives rise to some distinctive building shapes evident in City Hall’s response to its triangular site.”

My wife, Shauntelle, and I don’t start at City Hall, however. After draining our morning cups at Balzac’s (the coffee company was founded here in 1996), we turn onto Waterloo Street South to take in the handsome face of No. 75, a limestone-clad, curtain walled, mid-century modern government building that is, admittedly, “similar to many all over Ontario,” Mr. Lemon writes.

Back at the corner of Waterloo and Ontario Streets, Knox Presbyterian (1913-15) by Thomas James Hepburn (his father, Alexander Hepburn, designed the 1898 church here that mostly burned down in 1913) is a stout, striking building with “somewhat Nordic-Gothic influences.”

At 30 Downie St., I am awestruck by the sensitive manner Moffat, Moffat & Kinoshita married their 1979 brick bank building (now a CIBC) to its Victorian neighbours; not only that, vertical bands of brick set en pointe enliven the undulating façade with deep shadow. A stone’s throw away, the former British Mortgage and Trust Co. building (Rounthwaite and Fairfield, 1962), now Scotiabank, also responds to older neighbours as well as the impressive Perth County Courthouse (1885-87, George Durrant) across the street. While the bank uses 120-degree angles to determine its massing, and sports Quebec granite and imported Portland stone, Mr. Lemon writes that the building is not "widely loved” despite being noted by Docomomo Ontario (DOcumentation and COnservation of the MOdern MOvement).

We next head to the Shakespearean Gardens (1936) to fill our lungs with natural perfume, and our eyes with Cleeve Horne’s 1949 sculpture of the Bard himself. Not long after, we reflect upon the Stratford War Memorial at the foot of Erie and Downie streets by Toronto-born Walter S. Allward, who also designed the Vimy Memorial in France.

Hungry for lunch, we take Mr. Lemon’s suggestion and drive two kilometres to the outskirts of town for a famous footlong at Erie Drive In. I am not sure I’ve had a better milkshake in my life.

On the way back, we stop at Festival Hydro by G.M. Ritchie, an exuberant 1959 flying saucer-fronted building of yellow brick with a Miesian flat-roofed portion behind. It too, writes Mr. Lemon, has been noted by Docomomo Ontario.

Still in the car, we take in the famous, crown-shaped Festival Theatre (Rounthwaite and Fairfield, 1957; KPMB renovation and addition 1997) and drive past 210 Water St. to see furniture magnate George McLagan’s mansion (“furniture manufacturing was once a mainstay,” Mr. Lemon writes) before stopping at the William Allman Memorial Arena (1924) and its big glass block façade to learn that it’s one of “the last Ice Palaces left in North America." Nearby, work progresses on the Tom Patterson Theatre (Harari Pontarini). To round things out, we read a panel on the city’s furniture-making history near the bandshell.

While it’s odd touring Stratford with sidewalks relatively empty – in normal times the city welcomes half a million theatre-goers each season – there is a sense of pride and permanence here that speaks through its architecture, whether from the 1870s, 1970s, or what’s being built today. This shift, writes Mr. Lemon, “has made other sides of life in Stratford more evident.”

Back at 7 Cobourg St. after a long architour, what’s also evident is that the martini in my hand will taste much better surrounded by Shim-Sutcliffe’s logical lines, warm wooden surfaces, and the rippling lake outside the window.

For information on Seven&Nine, visit https://sevenandnine.ca. Accommodation for Mr. LeBlanc was provided by Robert Lemon; Mr. Lemon did not review or approve this article. 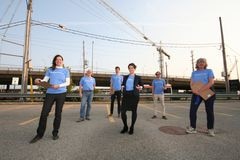 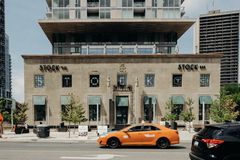 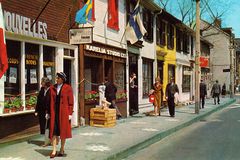