After the pandemic struck in March, a few residents of the Norris Crescent Co-op lost their jobs and found themselves facing a world of financial uncertainty.

The co-op board snapped into action, offering up No Frills gift cards, a payment plan for missed rent cheques, and, perhaps most importantly, reassurance.

“We said no one would get evicted,” says board president Sharon Power, who has lived on Norris Crescent, in south Etobicoke, for about 15 years.

Sitting on a lawn chair outside her apartment, she watches cyclists ride by and casts an indulgent eye over the little community – 56 apartments ranging in size from one bedroom to four bedrooms, arrayed across ten two-storey post-war dwellings on a Mimico cul-de-sac abutting a lakefront park. There are about 200 residents, some of them very long-term, with a mix of incomes and ethnicities. In exchange for amazingly affordable rents ($1,600 is the highest), all are expected to participate somehow, from volunteering on the board to picking up stray mail.

Co-op living “is not without its challenges, I’m going to be honest,” Ms. Power says with a smile, allowing that everyone knows everyone else’s business. But, she adds, “[it] can be very rich. You have to have the intentionality of being an engaged member.”

In the past few years, engagement has also meant confronting the declining state of the buildings, which need new roofs, foundation repairs and building envelope upgrades. The co-op board, however, is also looking at redeveloping part of its landholdings – in effect replacing two of the houses closest to Lakeshore Road with a six-to-eight storey accessible mid-rise, with 35 to 50 units.

The board has hired a planning consultant to guide the members through the maze of zoning approvals and potential funding sources. Ms. Power points out that the plan also means that rents will have to rise by about 5 per cent to make the math work.

It’s a slow process, with plenty of risk for the co-op. As she says, “There’s got to be an easier way to assist co-ops with working through development plans.”

In spite of the speed bumps, Norris’ story offers a glimpse at what seems to be a bit of a renaissance in co-op housing development in Canada, especially in British Columbia and Quebec (see sidebar), where creative land and financing deals are bringing new projects online.

Tim Ross, executive director of the Co-op Housing Federation of Canada, says about 250,000 Canadians now live in affordable co-ops ranging in size from single apartment buildings to collections of low-rise dwellings. He knows from his members that demand, especially for family-suitable units, far exceeds supply.

The bulk of Canada’s co-ops date to the 1970s and 1980s, when the federal government pumped rent supplements and mortgage subsidies into these projects as an alternative to both private multi-unit residential slab towers and social housing complexes. At the time, they were seen as a progressive form of mixed-income urban housing.

Yet, with the subsequent surge of condo development, plus government decisions from the mid-1990s onward to phase out co-op subsidies, there’s been scant co-op development in the past 20 years. Mr. Ross says some co-op boards want to expand their portfolios or intensify, as in the case of Norris, but are held back by soaring real estate prices and forbidding development costs.

In B.C., however, affordable housing grants from the provincial NDP government and the City of Vancouver’s 2012 decision to transfer real estate at effectively no cost to community land trusts has meant that about 2,000 new affordable units will be built by 2023, about 70 per cent of them co-ops.

The first 350 are under construction, with one co-op in Vancouver’s River District set to open in August, according to Thom Armstrong, CEO of the Co-op Housing Federation of B.C. (CHFBC). Key to the plan has been low-cost loans from CMHC and a $2-million investment by VanCity, the credit union, to establish a properly capitalized development group to acquire assets and manage the process.

Mr. Armstrong adds that CHFBC has been able to snap up derelict and virtually insolvent co-ops in places such as Port Moody and Port Coquitlam, invest in significant upgrades, and then transfer the ownership to a community land trust that is a subsidiary of the federation.

The last step means the property is not only removed from the private market in perpetuity, but becomes an asset that can be leveraged to acquire other parcels. (The Cooperative Housing Federation of Toronto also controls five land trusts that provide housing for 10,000 people living in 32 co-ops across the city.)

It appears that similar opportunities are cropping up in Toronto, as well.

Earlier this month, Toronto city council approved a deal with Streetcar Developments to upgrade an old house at 685 Queen St. E., near Broadview Avenue, which belongs to the Riverdale Co-op and has nine apartments. Located next to a Toyota dealership slated for redevelopment by Streetcar, the building will be expanded to 26 units, including complete upgrades of the original nine apartments.

Riverdale’s manager Adene Kuchera says the co-op owns 28 properties in the east end, with 124 units – mostly duplexes, triples and walk-ups. It was founded in 1974 and expanded until the 1980s, but the board hasn’t acquired new units since then. About half of its properties are mortgage free, Ms. Kuchera says.

While earlier proposals envisioned up to 80 units and 12 storeys, the scale was unrealistic. The project will be constructed by Streetcar, which is contributing $5.2-million in Section 37 grants, with another $11.2-million coming from waivers on city fees and taxes. Construction is expected to begin next year.

The number of proposed units was reduced shortly before the project landed at council so Streetcar wouldn’t risk neighbourhood objections or re-zoning appeals – a decision that brought criticism from some affordable housing watchers. But Councillor Paula Fletcher defended the compromise, saying it provides Riverdale’s board with financial certainty. “This has not been the easiest application.”

She points out that new-build co-ops are also envisioned for other development sites in the area, including a large mixed-income Toronto Community Housing complex being intensified by RioCan.

With evidence of deal flow in Canada’s two most expensive cities, co-op advocates are hoping that some of funding pledged under the Liberal government’s much touted National Housing Strategy will stoke the development of more co-op projects. But Tim Ross says the program remains “difficult to access.”

Adds Jon Harstone, a veteran affordable housing consultant who has managed the development or expansion several Toronto co-op projects, “Unless the feds put money into non-profits, this will all be one-offs.”

Laurent Levesque founded Utile, a student housing co-op development non-profit, in 2012 when he was still a planning undergrad at the Université du Quèbec à Montreal (UQAM), largely out of a desire to put his learning to good use.

Seven years later, the group’s first co-op venture, The Woodnote, at Concordia University, is set to open in September. The $18-million, 90-unit project, designed by Rayside Labossière, is backed by the Concordia student union and a pair of provincial student organizations, among other investors.

The units range in size from studios to four-bedroom suites, all fully fitted out with modern amenities instead of the dorm-style housing that’s far more common on and around Canadian campuses. Woodnote will accommodate up to 140 students. A second and larger Montreal project from Utile will open in 2022.

Unusually for co-ops, Utile’s ventures involve no provincial funding. What Utile has done is forge financial partnerships involving several credit unions, which tend to have social responsibility investment mandates, and student organizations that can provide a steady stream of revenues through a dedicated levy.

The City of Montreal offered a $1.6-million grant, and Canada Mortgage and Housing Corp. supplied a $3-million loan. The financing allowed Utile to buy land for both projects. Woodnote, in fact, is located in Montreal’s desirable Plateau area.

The organization operates as the developer, providing the expertise that has been lacking in the student co-op housing world for years, says Mr. Levesque. “You need a development organization to make projects like these work.”

He sees both projects as “proof of concept” developments that offer an alternative vehicle for delivering higher-density student housing complexes, which are typically contracted out to private developers by university administrators.

Mr. Levesque points out that Utile is working on several student housing co-op projects outside Quebec, all of which are still in the early stages. “There’s no secret recipe. Our model is completely scalable and replicable across the country.” 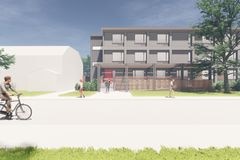 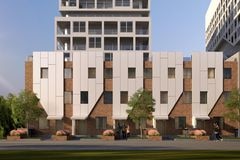 By the (pattern) book: How the humble mid-century bungalow shaped Canadian neighbourhoods
Subscriber content
May 15, 2020 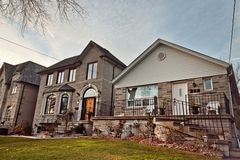