That’s how some of the city’s leading developers, planners and architects envision Toronto in twenty years.

They came together last week at Toronto of the Future, an exhibit in Metro Hall featuring renderings and models of the new development projects that promise to re-shape the city. They want green spaces, walkability and eco-friendly buildings to be the way forward.

“I see more of a human development than what we’ve seen in the seventies or eighties,” said Robert Vezina, who organized the exhibit at Metro Hall that ended July 1.

“Projects that you’ll see, they’re significant to the cityscape but they incorporate a lot of recreational facilities — public spaces, green spaces. It’s a trend.”

To start, he pointed to CIBC Square, a pair of office towers being built at the foot of Bay Street.

They straddle the train tracks behind Union Station, and will be connected by a bridge that’s as big as a football field, Mr. Vezina said. Atop the bridge will be a park, so people can walk from downtown to the waterfront, eliminating the need to go through the existing Bay Street tunnel under the tracks.

“[The tracks are] a fracture in downtown Toronto that has never been very nice,” Mr. Vezina said.

Further west, Rail Deck Park could cover the rail corridor from Blue Jays Way to Bathurst Street, creating 20 new acres of green space. City council has endorsed it, and an engineering analysis on the feasibility of covering the tracks is due back this fall.

“Thousands of people have moved into downtown, and we want to get them a park,” director of community planning for Toronto and East York District Lynda MacDonald said.

In the next twenty years, city projections show 200,000 more people are expected to move into the downtown core.

To house them, many more condo towers are springing up, including seven at Front and Spadina in a project called The Well that will be a mix of condos, rental apartments and retail space. Tridel launched the sale of units at three residential buildings on June 3.

The Don Lands, on the east side of downtown, are also in for a major transformation.

The area is definitely getting more parkland, Ms. Macdonald said, with $1.2 billion committed to help beautify the mouth of the Don River by 2024.

But the biggest change could come from implementing Sidewalk Labs’ Quayside project to build a controversial “smart city”.

The area will likely be the site of new buildings following a burgeoning trend toward more environmentally-friendly architecture. Planned for George Brown’s waterfront campus is a striking mass timber building called the Arbour.

Carol Phillips, partner at Moriyama & Teshima Architects, stood beside a model of it in Metro Hall. Building with wood carries a smaller carbon footprint than materials like steel and concrete, Ms. Phillips said. She also hopes the building gives students a homey feeling, evocative of a cottage on the shore of Ontario’s many lakes.

The structure is peaked and angled out, to create a “solar chimney,” for natural convection and ventilation.

For about half the year, it can maintain its temperature passively instead of being heated or cooled, she said. It’s so energy efficient that the biggest energy draws will be classroom lights and students plugging in their laptops.

“I think we’re going to be seeing a lot more responsible architecture,” Ms. Phillips said, adding every project going forward needs to be built responsibly and with low-carbon materials.

“But that doesn’t mean you can’t create beautiful, striking spaces that really build our cities.”

Mr. Vezina thinks gaps between existing towers will start to be filled in, especially along the subway lines. In the coming years, the view of Toronto from Centre Island could more closely resemble New York City.

Exemplifying that is developer Sam Mizrahi’s The One, going in at 1 Bloor Street West. The structure, forecast to be complete in 2023, will be Canada’s tallest residential tower at 85 floors.

“It becomes a secondary focal point next to the CN tower in the city. It showcases Toronto’s international status in terms of architecture, engineering," Mr. Mizrahi said.

Units in the building with distinctive diagonal braces start just under $750,000.

Gregg Lintern, chief planner and executive director of Toronto City Planning, encouraged exhibit attendees to not only think about the new buildings, but about the future citizens who will experience them.

“When we build, when we intensify ... lets also consider how we’re enhancing equity and how we’re building inclusively. For people who live here, but also for people who don’t live here yet,” he said.

Inside the exhibit was a display from Housing Now, Toronto’s initiative to build affordable housing on 11 plots of city-owned land. The plan includes 3,700 affordable rental units.

If development companies want to opt out of this model, they would need to pay the city in money or land to affordable units can be built elsewhere.

“You don’t want to just have ritzy rich people living in the city. You want to have all types of people,” Mr. Vezina said.

Housing is a high priority for city planners, Ms. MacDonald said, and Toronto is working to advance inclusionary zoning policies.

But developers are also coming to the table with plans for more affordable buildings, she said, pointing to Westbank’s affordable rental units at its development on what used to be Honest Ed’s.

Mr. Mizrahi said some of his company’s other developments also cater to residents looking for more affordable options. He pointed to a planned development near Yonge and Steeles streets of 1,700 rental units.

It would be served by the new Yonge Subway Extension.

“I think that area is extremely underdeveloped and underutilized,” he said. “We saw what happened at Yonge and Sheppard, which was explosive.”

Although buildings took centre stage at the Metro Hall exhibit, those dreaming of Toronto’s future agreed its livability depends in building infrastructure to keep pace with growth.

“Toronto is starting to show its colours as a global city,” Mr. Lintern said. “It’s an exciting time to be involved in this industry." 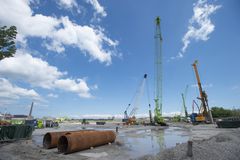 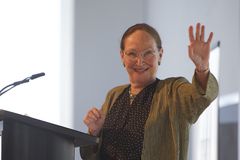