Striding briskly out to the end of a 600-metre-long former industrial pier poking out into Lake Ontario, Fabio Mazzocco seems utterly indifferent to the driving rain and the gusting wind as he takes in the gray lapping water all around.

“It’s quite magical from all directions,” muses the Burlington developer, who plans to use this long-decommissioned hunk of Ontario’s energy infrastructure as the anchor of an ambitious mixed-use community that will unfold in south Mississauga, near Port Credit, over the next decade or so.

He points to a spot on out on the rugged concrete breakwater where snowy owls and migratory birds now alight. “It’s hard to say which view is the best.”

Earlier this year, Mr. Mazzocco’s firm, Argo Land Development, emerged as the winner of an auction that saw Ontario Power Generation sell off the former Lakeview Generating Station lands for $275-million. Lakeview Community Partners, the development consortium Argo heads, will spend the next 10 to 15 years cleaning up the site and building a lakefront hub with up to 8,000 residential units as well as hundreds of thousands of square feet of commercial, institutional and cultural amenities, all huddled on a striking but derelict swath of Mississauga’s waterfront.

According to Mr. Mazzocco and his planning team, the project – unprecedented in scale for the western GTA – will feature a range of residential formats, including mid-rise condos, towers up to 25 storeys and townhouses, as well as retail and other commercial uses. During extensive local consultations, area residents signed on to a plan that proposes significantly more density than would normally be found on a traditional suburban site, but also less than the cluster of high-rise towers that have sprung up around the mouth of the Humber River, in nearby Etobicoke.

The first occupancies are expected in 2023.

Municipal officials want the consortium to build affordable rental and ownership units, as well as an “innovation” corridor intended to attract the tech companies that have flocked to Mississauga in recent years. According to Andrew Whittemore, commissioner of planning and building, the Lakeview project will be a major growth node within a wider revitalization in the neglected region of southern Mississauga, tucked between Mimico and Port Credit, south of Lakeshore Road.

The property, in fact, is about halfway between two GO stations that have been targeted for intensification and will eventually be linked to a bus rapid-transit line along Lakeshore Road, as well as the Hurontario LRT going north into the commercial core of Mississauga. The entire area, Mr. Whittemore says, is meant to accommodate a significant amount of Mississauga’s future growth.

Part of the Lakeview deal involves a dedication of 67 acres of parkland to the municipality, including the pier, as well as land along the water’s edge and a former canal that served as a cooling structure for the generating plant. Peel Region and two conservation authorities are also building a wetland immediately to the east of the property, just south of a large water-treatment plant. A waterfront bike path, long routed around the generating-station site, will traverse the water’s edge and link to waterfront parks both to the east and the west.

The 177-acre property once housed Ontario’s second largest coal-fired power plant, whose towering smoke stacks, known locally as the Four Sisters, were first a symbol of the province’s postwar industrial ambition and later a major source of the the Greater Toronto Area’s smog problem. The pier was used for ships delivering holds full of coal.

After Dalton McGuinty’s Liberals phased out the polluting fuel in 2007, OPG demolished the iconic structure. But when provincial officials proposed a huge gas-fired generator for the property, Mississauga residents and local politicians hit the roof, with the blow-back triggering a intensely controversial cancellation on the eve of a provincial election. That move, and the simultaneous cancellation of another gas plant project in Oakville, ended up costing taxpayers $1.1-billion.

In the aftermath, a community group organized by Jim Tovey, a future south Mississauga city councillor, pushed hard to reclaim and redevelop the Lakeview lands – a process that led to an ambitious official plan amendment that lays out not only new urban uses but also allows for the possibility of sustainable infrastructure, such as district energy.

While the long, jutting pier, which is unique along the GTA shoreline, will certainly attract visitors, Mr. Mazzocco and his planners are keenly aware of the chicken-and-egg dilemma associated with developing a former industrial site that is so far off the beaten path.

Initially, a visioning exercise, known as Inspiration Lakeview, proposed a commercial core running south from Lakeshore Road – in effect, a high street lined with mid-rise condos and retail at grade. But, as Michel Trocmé, a partner at Urban Strategies, points out, retail has become a tough sell in the past few years: “It’s a lot of cappuccino you’d have to be pouring along that stretch.”

Urban Strategies, which advised Mississauga, is now working with Argo. (Argo’s primary planner is Glen Broll of Glen Schnarr & Associates.) The planning team has revisited the scheme so that the core of the area will be a cluster closer to the water’s edge, near an existing marina and anchored by a park that will be surrounded by higher density buildings. This shift in the urban design, Mr. Trocmé says, “has a better chance of succeeding than a traditional mainstreet.”

As with Toronto’s East Bayfront lands, both the consortium partners and Mississauga officials want the Lakeview development to include employment and other non-residential uses, including cultural venues or educational institutions. These will be clustered on the property’s eastern edge, in effect creating a barrier between the residential blocks and the large water treatment facility next door.

But Emily Reisman, an Urban Strategies partner who is also working on the project, says she doesn’t think the employment uses are “critical on the front end.” “People will be drawn down there by the promise of the waterfront.”

Like Mr. Mazzocco, she, too, vividly recalls the experience of first discovering that coal pier, which has never been open to the public (and remains for now behind a locked gate). “Our first time on the pier was on a miserable day. There was the sheer delight of feeling like you’re walking out into the middle of the lake.” 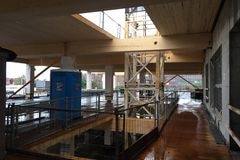 Mixing it up: Toronto developers add community amenities to their condo projects
September 13, 2018 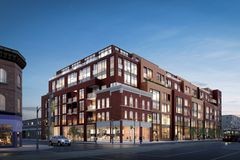 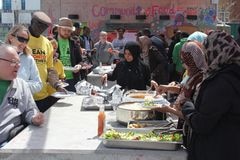