In drag racing, every ounce counts. The best racers down at Cayuga’s dragway and car racing course use cables for door handles, look through Lexan instead of glass, exchange conventional batteries for lithium ones a quarter the size, replace metal body panels with carbon fibre, remove glove boxes, padding and all other creature comforts, and swap out every part possible for the aluminum version.

The result is a lithe, muscular, built-for-speed machine that wows crowds and breaks records.

“I started here 18 years ago,” Mr. Mete says, “and it didn’t take me two weeks to realize we needed a centralized building.” Indeed, when the single-tier municipality south of Hamilton was created in January, 2001 by combining Dunnville, Hagersville, Cayuga, Caledonia, Jarvis, and everything in between (now sporting a population of 45,000), getting a permit for anything was a pain in the neck for the average person.

“Back then,” he continues, “I would have people come in and see me in Caledonia; if it was a Dunnville project they’d have to go to Dunnville to see the building inspector, they’d have to go see a planner in Hagersville, and then they would have to go get water, waste-water, and road permits out of Kohler, which is on the way to the lake … at least four offices, sometimes even five.”

Finally, in the second decade of the 21st century, says Mr. Manley, things started to happen: “We took a long-term look at the life-cycle [and did] a financial analysis of the existing buildings … they were all filled to capacity. We [asked] how much work is required to keep these things going, we looked at them in terms of their possibility of expansion because we’re a growing community.”

When those numbers suggested a new build, Hamilton’s Thier + Curran Architects were called upon to look at a somewhat narrow site adjacent to Cayuga Memorial Arena. “I remember meeting Bill for the first time, and he [said]: ‘Wow, this is a tough site, this’ll be a fun project’ … and it’s been a blast.”

We’re standing at the southwest corner of the site at Chippewa Street E. and Thorburn Street, admiring the dramatic, angled slope of the new council chamber roof; one of the few flourishes this drag-ready building possesses. Below the big window, glinting in the sun, “real Wiarton escarpment limestone” adds some physical weight to underline the mental heavy-lifting that goes on inside.

Beyond the council chamber, the lobby’s two-storey glass wall recedes a little, the canopy over the entrance (which locals have christened “the hockey stick”) juts out, followed by the glassy stair tower and, finally, the office wing pushes out as well; to enhance this rhythm, cladding alternates between light and dark wood-look panels and two colours of brick. “We wanted to make sure it was a warm building that didn’t feel like your typical bland, government office building,” Mr. Curran offers.

We step inside the light-filled, high-ceilinged lobby – the story here is that a three-storey atrium was perceived as too ostentatious – and our eyes are greeted by the usual counters and waiting room furniture, but also by colourful murals by Jamie Lawson, interesting light fixtures (as chosen by Mr. Curran), and a ton of pattern provided by the heavy grain of birch. “Birch is just a wood that’s out of favour,” Mr. Curran says. “It’s super inexpensive but we just think it’s beautiful; it’s what was used in every school in the 50s and 60s … and then we used a little bit of zebra wood for an accent.”

Just past the customer service desk, the mayor and Mr. Manley have their offices … and they’re not very large, which was exactly the point. “We made a deliberate decision, early on, that we were going to try to democratize space … those kinds of little decisions have gone a long way,” Mr. Manley says.

Further efficiencies have been achieved by grouping general managers with their staff but allowing for cross-pollination between departments vis-à-vis a big lounge area, big kitchen, and even a semi-sheltered outdoor area with a barbecue: “There was a lot of discussion [about this] because you don’t want the public driving by saying ‘what are these guys doing, they’re supposed to be working,’” Mr. Manley says with a laugh. “That led to some of the design features.”

Single-family homes that border the site also dictated how the building – and particularly the windows – had to be shaped and positioned. Walking the second and third floors, it’s clear that no matter where one stands, it’s impossible to peer into anyone’s backyard.

It’s also clear that little things, such as hydraulic desks (which don’t cost much more than regular ones), nice tile in the bathrooms, windows that actually open, multiple basement shower stalls for outdoor workers, and cheerful paint colours and murals on the walls (or even the carpet underfoot), were understood to be, collectively, very big things for the mental health of the building’s occupants.

Mr. Mete tells of one former councillor – a pig farmer by day – who got quite emotional when he toured the building earlier this year. “He was very choked up when he went through, it was a big deal for him.”

And, at $21-million, as lean and mean as the best drag car down at the track.

Critical care for the site of a former hospital in Peterborough, Ont.
Subscriber content
October 14, 2020 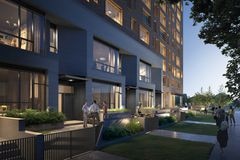 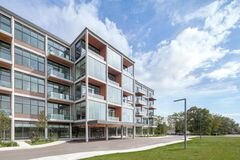 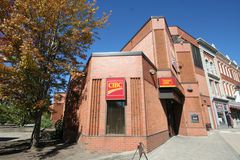