It was simply a matter of convenience; I was working on my second-ever piece for Globe Real Estate and I needed a quick quote about the spirit and optimism of the postwar period. And since the architect of painter R. York Wilson’s 1955 Alcina Avenue home had died while I was still in elementary school, I turned to the internet to see who, out there, had been practicing back then.

Like a lucky dart hitting a bullseye, up popped architect Jerome Markson, a 1953 University of Toronto graduate who had been in practice for 48 years in 2003. And that he picked up the phone and enthusiastically shared his memories with a complete stranger hinted at something: Here was an architect who still had passion for his craft, who still thought about the romance of it; inside that (then) 74-year-old was the same little boy who had grown up across from the Art Gallery of Toronto (the name changed to Art Gallery of Ontario in 1966) and fell in love with a library book about Frank Lloyd Wright after his older brother quite casually said he should become an architect.

In today’s parlance, you might call Mr. Markson a nerd, a fanboy, a geek.

A few years later, while profiling the Seneca Heights subdivision he’d done in Woodbridge, Ont. in 1955, his geekiness was cemented in my mind. Sitting in his office at Markson, Borooah, Hodgson at Eglinton and Redpath Avenues (in a very Mad Men-esque building), I told him how much I loved those post-and-beam designs, especially the semi-sheltered atriums between carport and front door that celebrate the psychological transition of “coming home.” I even told him that, since my new wife and I were house hunting, perhaps we’d look at those.

“You don’t want to live way up there,” he told me.

He then tilted his head in much the same way as a dog does when trying to understand his or her human: “Are you a real person?” he asked.

I guess Mr. Markson was surprised to meet another fanboy.

The thing is, fanboys and fangirls chart their own course. They don’t care what others think. When they love something, they love it completely: Think of the Trekkers who, back in the early days of conventions, risked ridicule, or worse, when they left the house wearing Spock ears.

And Mr. Markson, soon to turn 91, has always charted his own course. In fact, that conviction came just after graduation, while touring the very corporate offices of John B. Parkin Associates. Shuddering at the row-upon-row of starched-shirt-and-tie-wearing automatons behind identical drafting boards, he hung up his own shingle and never looked back.

Thankfully, those at his alma mater have decided that now is a very good time to look back. On January 29, A Quite Individual Course: Jerome Markson Architect opened at the Larry Wayne Richards Gallery at 1 Spadina Cres. While not a massive show, it will provide architecture aficionados a crucial overview of the Toronto architect’s long career.

“This wall is all the multifamily housing,” says show curator and U of T associate professor Laura J. Miller, who penned a very massive book on Mr. Markson, Toronto’s Inclusive Modernity: The Architecture of Jerome Markson (Figure 1 Publishing), which will be available to gallery-goers. “And then this bay," she says, "is builder-houses, which is unusual for a bespoke architect who does houses for wealthier clients.”

American-born Ms. Miller, who arrived in Toronto in 2009, first met Mr. Markson while planning a “super studio” on one of Mr. Markson’s projects, Alexandra Park, a 1965 public housing complex that he penned with Klein and Sears, and Webb Zerafa Menkes (currently being demolished). She “cold-called” him, as I did, and he enthusiastically agreed to speak to her students.

While custom homes for wealthy clients – two standouts are the 1959 James Moses Residence in Hamilton and the 1960 J. Posluns Residence in North York, Ont., – did dominate his first decade, Mr. Markson also peppered his résumé with townhouses for miners in Elliot Lake, Ont., (1957), and the small-and-quirky Vaile Cottage at Lake Simcoe. He did exhibition homes, too, such as the very Frank Lloyd Wright-inspired Chatelaine Design Home ’64. By the late-1960s, Mr. Markson was exploring the public realm with his True Davidson Acres (Metro Home for the Aged), and, in the 1970s, the interesting Pembroke Mews Co-Op – which retained onsite Victorian homes – for the City of Toronto, and the David B. Archer Co-Op in the brand new St. Lawrence neighbourhood, which replaced a long strip of dirty industrial land.

“The essence of Canadianism is helping each other,” he told me in 2007 when I asked about this transition from bespoke dwellings to public housing. “I didn't have to intellectualize it very much, it was just something I felt – why am I doing these houses, what about all the people out there who need housing?”

Of course purchasing a condo in the Markson building with which most Torontonians are familiar, Market Square (1980), would be difficult in this hot market. But that long, thoughtful, award-winning Front Street East condominium that brilliantly frames St. James Cathedral is but one small part of this six-decade narrative.

“There’s a story for every single one of these things,” Mr. Markson said, scanning the wall. “And she did it,” he finishes, nodding at Ms. Miller. “She’s terrific.”

A Quite Individual Course: Jerome Markson Architect runs until March 13, 2020 at the John H. Daniels Faculty of Architecture, Landscape, and Design. Admission is free. And, as a shameless bit of self-promotion, I’ll add that Mr. Markson’s Seneca Heights neighbourhood made such an impression on me that I included it (and Mr. Markson) in my novel, Falconi’s Tractor, which was released in May, 2019 (Guernica Editions). 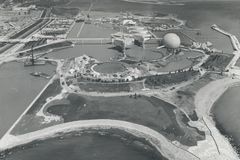 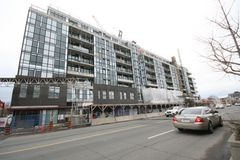 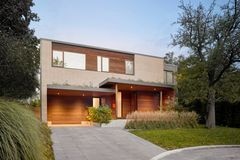