Place, for a moment, Toronto’s venerable 1929 Fairmont Royal York Hotel into your mind’s eye. And, further, imagine that its Indiana limestone was dirty, chipped or generally in such poor repair that its owners decided to reclad it, in the currently hip fashion, using multicoloured aluminum or fibre-cement rainscreen panels. Maybe in shades of blue, or perhaps in the hypnotic “dazzle camouflage” popular on warships during the First World War.

Shocking, right? An injustice! How could they?

Fans of modernism – that optimistic, futuristic “less is more” period that arrived in Canada in the 1940s and lasted until the mid-1970s – are currently experiencing that sense of injustice.

Modernism is under attack. And it has a great deal to do with cladding, too.

But first consider what modernism was: Born in early 20th-century Europe, it was both an artistic/architectural movement and a social one. Wassily Kandinsky painted the first abstract in 1910; Piet Mondrian began his grid series of paintings in 1919. Architecture would be abstracted in those years by stripping away ornament and other unnecessary fussiness, and made to conform to Mondrian’s grid by Ludwig Mies van der Rohe, who, in 1921, would enter a fully glass-and-steel structure, the Friedrichstrasse Office Building, into a competition (it wouldn’t win) and spend the rest of his life refining this idea, finishing with the 1964 Toronto-Dominion Centre. The school he taught at, the Bauhaus, would try to reinvent sculpture, furniture and textile design (contrary to popular belief, the Bauhaus did not reject handcraft and the arts, but rather tried to figure out ways to marry them to our new industrial world).

Another Bauhausler, Walter Gropius, would move to Harvard and teach both Macklin Hancock, the 27-year-old who planned out the modernist mecca of Don Mills in the early 1950s, and John C. Parkin, who would design many of its buildings. Mr. Parkin’s minimalist hand can still be seen in one glass-and-steel bank on Lawrence Avenue East, Ortho Pharmaceuticals (now Janssen), and at Don Mills Collegiate. Don Mills Collegiate, with its slim posts holding up covered walkways and grid-like windows with spandrels – a panel-like area between the head of a window on one level and the sill of a window immediately above – underneath, brings to mind the first Don Mills shopping centre, demolished decades ago.

Well, consider this: When only a half-dozen elements make up an architectural style – because let’s add brick, board-formed concrete and perhaps the shallow pitch of a residential roof – completely altering three of them means fully half of the architect’s original vision has been lost.

Today, that loss is taking place at the following locations: The Simpson Tower at 401 Bay St. (Parkin with Bregman & Hamann, 1968-69), two towers of the Richmond-Adelaide Centre complex (120/130 Adelaide St. W., Webb Zerafa Menkes Housden, 1965/1979), and the Lord Lansdowne School (Peter Pennington, 1961). Not being reclad, but having important negative space filled in, is the office portion of Manulife Centre (Clifford and Lawrie, 1974).

At the Simpson Tower, bronze glass and sepia-toned spandrels are being replaced by light blue-grey versions and the long pilasters are being entombed under white metal panels. The Richmond-Adelaide towers – both black, the earlier tower has striking stainless-steel pilasters – are completely transforming into billowy, blue-glass architectural cream puffs to match the newly completed (and likable) glass shard by Kohn Pederson Fox at 100 Adelaide. Across from the new University of Toronto architecture school, Lord Lansdowne, that jaunty, Jetsons-esque, crown-shaped elementary school, will be far less jaunty when its burnt-orange spandrels have all been replaced by dull aluminum. To accommodate the hip Italian grocery store Eataly, the brutalist-era Manulife Centre is diminishing the leaning aspect of Floors 3 to 5 by filling in the wide sidewalk underneath.

Yes, building envelopes have a lifespan, and, says architect Peter Ortved, a principal at CS&P Architects, updating them gives “the building an extended life as a commercially viable property.

“The result is improved energy efficiency and, therefore, reduced operating costs, which benefit the users; enhanced comfort levels for the tenants, in terms of thermal comfort, solar control, et cetera [and] improved maintenance on both the interior and exterior, which also benefits the users.”

But must that also drastically change the look? No, suggests heritage expert Michael McClelland, who points to two examples: “TD Centre, which has completely double glazed its buildings and done a huge retrofit, with almost no physical apparent change – the Getty [Conservation Institute] is going to be using it as an example of how to conserve modern buildings … [and] First Canadian Place, which had to deal with a design fault, the [failing] marble [cladding], but cleverly replaced it with a fritted glass while retaining the character of the building.

“Modern buildings tend to be more of a kit of parts,” Mr. McClelland said, “so it’s necessary to look at it not so much as repair, like to masonry, but replacement of each part of the kit.”

Speaking of parts, after attending a seminar in 2008, “Conserving the Modern” by Parks Canada, I wrote: “The postwar period was one of great experimentation, and systems may be failing in bizarre ways, partly because of unique marriages of materials such as concrete, steel and glass. Yet, it’s the way these materials combine that is often what’s ‘character defining’ in a heritage context.”

So, building owners can take the easy way out and trash these essential pieces and start again or come to terms with what I concluded: “Yesterday’s bas-relief frieze is today’s spandrel panel.” 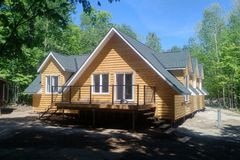 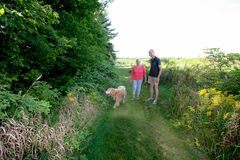 Moving from a house to a condo proved to be the right choice for this Toronto couple
September 20, 2018
Follow Dave LeBlanc on Twitter @gmarchitourist
Report an error Editorial code of conduct
Due to technical reasons, we have temporarily removed commenting from our articles. We hope to have this fixed soon. Thank you for your patience. If you are looking to give feedback on our new site, please send it along to feedback@globeandmail.com. If you want to write a letter to the editor, please forward to letters@globeandmail.com.
Comments