“I love hotels,” said Mark Harmon, founder of Auberge Resorts Collection, as he opened his 2017 Ted Talk. “A hotel holds the promise, everyday, of adventure and romance, of intrigue, mystery, betrayal, affairs of the heart, dangerous liaisons; where else can you find that in fiction and in film?”

Mr. Harmon, who admitted during “The Soul of a Hotel” that he’d unwittingly created a hotel with no soul (and then divested it), went on to list the four elements that go into creating something so “intangible” as soul: “Great design; a sense of place; a connection or being a part of the community in which the hotel is located; that the hotel inspires great affection or love through and for the people working there.”

I was thinking about these things as I got out of my car at the intersection of King and Queen streets in downtown Kitchener, Ont., just last week.

There, a great pile of red bricks, The Walper Hotel, has commanded the southwest corner since 1893, when Abel Walper hired architect Jonas Knechtel to design a Beaux-Arts building to replace the 1820 inn that Phineas Varnum had built (which his brother, Curry Walper, would purchase in 1886) but had been destroyed by fire.

While not much is known about Mr. Knechtel – the Biographical Dictionary of Architects in Canada lists only that the locally born builder-turned-architect died the year after the hotel opened at the age of 52, that his son, Charles, took over and that Knechtel may have been the only practicing architect in what was then the Town of Berlin – we do know that he had talent. The Walper’s brickwork is refined and delicate, the window placement is rhythmic and pleasing, and the cornice is striking and bold.

So that takes care of Mr. Harmon’s first two requirements.

The third, that connection to the community, is harder to confirm, since the grand old dame has recently undergone a reset of sorts by the Perimeter Development Corp., which purchased the property in 2013 for $4.65-million. (Perimeter was joined by partners Zehr Group, David Struke, and hotel managers CK Atlantis Ltd., with an announced renovation budget of $3.5-million.) Slowly, as Perimeter transformed the dated old hotel into a hip boutique hotel worthy of Kitchener-Waterloo’s new status as “Silicon Valley North” and long-time businesses, such as the barber shop (which was replaced by a different barbershop), the dollar store and the pub were given their walking papers, one might argue that the old soul had been yanked out as well.

Or, perhaps that soul had already evaporated: “The hotel was in, not full disrepair, but it was no longer what it once had been,” began Elie Newman, a principal at BNKC Architecture, who also recounted the local folklore of the once-proud Walper as counting Louis Armstrong, the Queen Mother, Eleanor Roosevelt, and various Canadian Prime Ministers as overnight guests. “Gradually it does what many of these hotels do. It’s a residential hotel, people are living here, it’s all cut up. I won’t dwell on it, but by the time you get to when it was bought, it was no longer in its heyday.”

The same could be said of Toronto’s bookends, the Gladstone and the Broadview hotels, now both owned by Streetcar Developments. Before their transformations, these were not places one might hold a business meeting, unless that ‘business’ involved illegal substances. Today, however, because of great care in how each reset was managed, and by involving architects and designers who exhibit sensitivity for each individual building’s history, soul has returned.

At the Walper, says Mr. Newman, a similar (and soulful) team was assembled. Starting at the top of his own firm with Joseph Bogdan, who cut his heritage teeth with the award-winning College Park (Toronto) restoration and reimagining in the late-1960s, to Jill Greaves Design and Dubbeldam Architecture + Design (for work on the guest rooms), and Dialogue 38 (for the lobby and public spaces), all the way to how the new retailers have curated their spaces, there has been much blood, sweat and tears put into the place.

The key was to take things slowly, Mr. Newman explained. “This was part of the first phase, I think it was 2018,” the architect said as the elevator door opened to the sexy, wine cellar-like design of TWH Social Bar & Bistro in the basement. “This place is really popular now; you come in her for a business lunch or something and it can be fairly busy.”

Does that mean Mr. Harmon’s third requirement has been met?

Up in the hotel’s famous Crystal Ballroom, Mr. Newman elaborated on the phased approach and how each of the five floors was presented to the public only when completely ready. He also spoke of structural problems, both large and small, that his team faced: Since the hotel had been expanded over the years – early photos show a four-storey building with a one-storey high corner tower and others show a buff brick building to the west that was absorbed – there was an odd truss system buried inside the demising walls (with major components cut) and, on a smaller scale, so many subtle changes in flooring heights that a complete levelling out was necessary. Adding modern HVAC and a sprinkler system was no picnic either.

“They’re so much fun to work on, they’re one big royal pain in the ass to work on,” Mr. Newman said with a smile as we gathered our things in the lobby. “It’s always these little wrinkles that you get, it’s never boring, it’s never the same thing.”

Just before I left, I asked the desk staff about the announcement to close the hotel for a month due to the COVID-19 crisis. As they spoke, I could see the deep concern in their eyes … then again, with “great affection” comes great sadness. Check the box on No. 4.

The Walper Hotel recently won the Lieutenant Governer’s Ontario Heritage Award for Excellence in Conservation. The 92-room hotel plans to reopen on April 22, 2020. 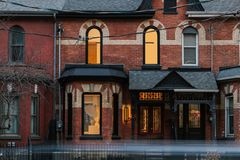 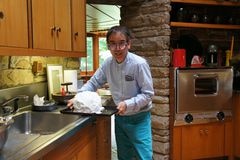 After two fires, a heritage rose rises from the ashes on Jarvis Street
Subscriber content
March 6, 2020 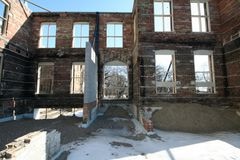