Lamb Development Corp. has begun offering deposits back to presale buyers in a downtown Toronto condominium apartment project according to documents shared with The Globe and Mail.

A spokesperson for Lamb Development, owned by and named for condo impresario John Bradley Lamb, declined to comment. As of Sept. 1, at least some of the holders of agreements of purchase and sale with Lamb Development Corp.’s proposed 218-unit Bauhaus condo project at 284 King St. E. have begun to receive letters asking them to either extend the terms of the contracts or take their deposits back.

In recent years, thousands of presale contracts for condominiums apartments and townhouses have been cancelled by developers, usually in a process that involves applying to Ontario’s new-home warranty regulator Tarion. There’s an alternative to cancelling an entire project, although it involves securing the co-operation of buyers.

“As it stands now, we do not believe we will be breaking ground for at least 2 years, with an estimated completion date of late 2025,” reads the letter Lamb Bauhaus clients received. “Our date for waiving the municipal and provincial zoning approval, 80 per cent sales achieved, and approval for construction financing are maturing September 1, 2019. We of course cannot waive the conditions.”

The conditions referred to are clauses that allow the buyers to walk away from the project if the developer hasn’t met deadlines. The Lamb letters offer buyers an option: either extend the early termination date to March 1, 2020, or “opt out of your deal and have your deposit refunded.” The letter directed buyers to contact Lamb staffers Debbie MacDonald or Jessica Russell. In recent years, Lamb has taken a similar approach to projects that faced planning delays: in 2018, presale buyers in a downtown condo called Wellington House received letters offering deposits back because “your unit no longer exists” thanks to planning changes to the building that had eliminated several apartments. Also in 2018, Lamb cancelled a downtown condo project called The James, later resold to buyers as The Woodsworth.

Land registry documents show that Lamb Bauhaus Inc., a company created to hold the land for Lamb Development Corp., purchased the building and land at 284 King St. E. in August, 2016, for $10-million, and immediately registered two $6.5-million mortgages against the property. The first was with Home Trust Company, which was to be due Sept. 1, 2019, and charged 4.75-per-cent interest; the second charged a much higher rate of interest – 45-per-cent annual interest – and was registered to Quincey Investments Ltd., Fort 1 Inc. and a variety of numbered companies. The guarantors on that mortgage were Jawad Rathore and Vincent Petrozza, two of the principals in Fortress Real Developments Inc., a pioneer in syndicated mortgages that loaned $920-million from 14,000 public investors between 2009 and 2017. A court-appointed trustee is now administering many of those loans and trying to recover money for the investors.

In February, 2017, a further $6.7-million mortgage (charging 8-per-cent interest over a five-year term) was registered against the King Street property with Building & Development Mortgages Canada Inc., or BDMC, another lender connected to Mr. Rathore and Mr. Petrozza’s Fortress.

But in 2018, Ontario’s financial services regulator got court approval to transfer control of BDMC to FAAN Mortgage Administrators Inc., to act as receiver for the outstanding $560-million in loans from 11,000 investors. FAAN has warned those lenders, many of them ordinary Canadians, they may not be fully repaid in many cases. In reports to the court, FAAN has said 24 of the 45 BDMC loans it manages have matured but the principal has yet to be repaid, and there are a dozen projects that face enforcement actions.

Lamb’s projects were frequent recipients of Fortress and BDMC money; FAAN documents show that, as of 2018, several outstanding loans were registered to Lamb properties in Toronto. The Wellington House project (also delayed, awaiting city approvals) owed $6.3-million to BDMC and $8-million to Cameron Stephens Financial Corp.; the Harlowe building (completed in 2019) had three loans: $54.2-million with MCAP, $18-million with Aviva and a third mortgage with BDMC for $15.9-million. The Woodsworth, formerly The James, had $4.2-million owed to KingSett Capital Mortgage Corp. and $5.7-million to BDMC. In December, 2018, Lamb paid $15,562,896 to settled the Harlowe debt, and in April, 2019, the court approved a $4,842,541 settlement on the James/Woodworth loan.

There are 110 lenders in the Bauhaus syndicate loan from BDMC, and over the ensuing years, there are multiple additions to the syndicate of creditors on the Fortress-connected loans, held in trust by Olympia Trust Company of Calgary and Vancouver-based Computershare Trust Company of Canada.

On Bauhaus, according to paperwork filed with FAAN, Lamb’s still owes $5.6-million to the BDMC syndicated loan, $6.1-million to KingSett Capital, and $3.42-million to the 45-per-cent interest Quincy group loan.

The Quincy loans have also undergone some changes, most recently on Jan. 9, 2019, with Fort 1 Inc., controlled by Tonino (Tony) Amendola (who was president of FMP Mortgage Investments, which surrendered its mortgage license in 2018) transferring its interest in the mortgage to 370271 Ontario Ltd., and Massimo Giovannetti, president of Royal Canadian Mortgage Investment Corporation. Quincy Investments Inc. is registered to 31 Densley Ave., the same address as Access Restoration Services run by brothers John and Joe Gagliano. The Quincy group has appeared as a lender in several Fortress-organized projects over the years.

In July, 2017, Home Trust transferred its Bauhaus loan to Kingsett, and rather than being registered solely against the 284 King St. E. land, the loan from that point on was also registered against dozens of condominium apartments, many owned by companies associated with Mr. Lamb. Mr. Lamb has described a similar approach to securing debt in a podcast he publishes on his website: In an episode from June, 2019, he discusses his first building project where he used his personally owned condos as collateral for loans.

Despite being unwilling to comment for this story, on his podcast, Mr. Lamb’s offers candid views of the City of Toronto’s planning regime.

“Virtually every property is a site-specific zoning, so you never really know what you’re getting … you’re taking a chance in Toronto,” he said. “In my case, they never agree with what we want to build – all our projects are slated to go to the OMB.”

With Bauhaus, the city staff report on his proposal to erect a 32-storey tower on a narrow slice of King Street East said it represented “overdevelopment of the site.”

“The proposed development is inappropriate because the proposed height and tower setbacks would cause excessive negative impact on the adjacent 14-storey residential building to the east and its outdoor amenity space in terms of shadow, sky view, and privacy,” the report reads. “The proposed development is also inappropriate because it would adversely impact the adjacent property to the west, does not provide new office space to replace the existing office space, does not provide a sufficient amount of indoor residential amenity space and does not provide a sufficient number of three-bedroom units.”

Lamb’s most recent submissions note that a planning approval has been granted for a similar height building just steps away: ODC Holdings (V) Ltd. won an OMB ruling to build a 34- and a 36-storey towers at 254 King St. E.

A hearing at the Local Planning Appeal Tribunal on the rezoning of the project is scheduled for Sept. 16.

Mr. Lamb also describes the drawbacks of preselling a condo before having site planning approved, a practice that has been connected to several condo cancellations in the GTA since 2017. 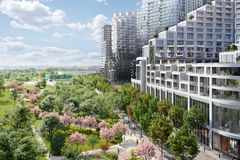 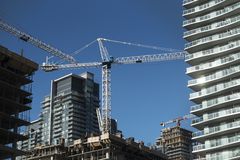 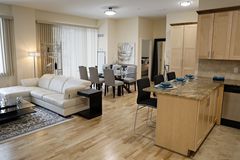