Long before this weekly column appeared (17 years ago for those scoring at home), I was an Architourist. Often, I’d drive to an unfamiliar neighbourhood, park, and stroll aimlessly, letting only my curiosity direct my steps. Even in areas prone to great change, I’d take pleasure in noting the architectural holdouts, the stalwarts that selflessly anchored their communities.

In the “Ave and Dav” area of Toronto (Avenue and Davenport roads) that building was Chow Keong Hand Laundry and Cleaners. While I had never been inside, I just knew it had a rich and detailed tale to tell. A Chinese laundry! In this day and age? How did it survive? But, with other commitments to satisfy, the research would have to wait, I’d tell myself … and, besides, other buildings were tugging at my (limited) sleeve.

It’s true indeed, says architect and educator Don Loucks, that every building has a story to tell: “Most people walk through our communities, full of buildings, like [they are] walking through a library full of books they can’t read; all of these books have something to say.”

To illustrate that point, on a warm September evening strolling Toronto’s Corktown neighbourhood, Mr. Loucks pointed to an unusual converted garage, then to a tiny worker’s cottage, and then spun on his heel to look at another cottage with a tiny second storey addition, all on diminutive St. Paul St. He might have even gasped at the wonder of it all.

Luckily for us, he and walking companion Leslie Valpy, a researcher at the Ontario Heritage Trust, have taken it upon themselves to tell many of the stories behind those old brick faces. Specifically, with Modest Hopes (Dundurn Press, 2021) this dynamic duo has put small, working-class, residential architecture under the microscope and, more importantly, introduce us to the humble folk who lived there.

“It’s about people,” confirmed Mr. Loucks. “People were forced into these [houses] because of money, but they made a life in them, and that’s what I love about them, you see these lives blossom as people overcome all of these things.” And, added Ms. Valpy as we turned onto Queen St. East, even when some tasted success, they often stayed put: “What we’d find in the [city] directories, 80 years later, it’s still the same family.”

Like that of Chow Chew Kam: born in a small Chinese village in 1887, he’d leave his pregnant wife behind for Canada’s west coast in 1905, where he’d earn a dollar a day in the coal mines. In 1906, his son, Chow Keong, would be born and raised by his mother, while Chow Chew Kam would make his way to Toronto. There, he’d learn the hand laundry business and work for others.

By 1921, he’d raised enough money to send for his wife and 15-year-old son. That son would open his own hand laundry business at 176 Avenue Rd., in 1946. Today, at 88-years-old, his son, Dennis Chow, still runs the shop with his father’s name emblazoned across the front window. And Mr. Loucks, also a talented artist, offers a drawing of the building on page 154.

But since we’re walking Corktown, I ask the authors about the folks who carved out lives here. On Bright St., for instance (which many Torontonians know for the dramatic lean on a few of the houses), we paused at No. 32, the lone single-storey cottage amongst two-storey, gabled homes. I learn that it once had a twin that was demolished in 1910. However, No. 34 Bright St., when it was a newly built cottage in 1862, was the residence of 42-year-old Irish widow Anne O’Rourke and her six children.

Ms. O’Rourke would find employment as a milkwoman, likely “at the Gooderham & Worts dairy located just blocks from her Bright Street cottage.” By the 1870s, write Mr. Loucks and Ms. Valpy, development pressure mounted when philanthropist Richard Brooking Butland purchased multiple lots and demolished many cottages with the “vision of creating a newer and better” street, but Ms. O’Rourke and her neighbour, Joseph Costigan, refused to sell. While the O’Rourke cottage would ultimately be demolished, Mr. Costigan’s has remained for us to gaze upon almost 160 years later.

Bright St. would also be home to Henry Box Brown, a Virginia slave who gained his middle name by shipping himself to Philadelphia freedom in a wooden box. While not a major player – he’d only live on the street from 1890 to 1893 – Ms. Valpy brings up his name because, funnily enough, her eight-year-old son tipped her off to his existence after learning about him in school.

On Percy St., we noted how the new condominium facing King St. E. had the good manners to step down to three-storey townhouses as it meets its elderly neighbours on Percy, then counted which of the original homes retained slate roofs.

From there, we walked to Ashby Place, which, curiously, has homes on just one side of the street.

“You know the Shea theatres?” asked Ms. Valpy. “One of the brothers, Jeremiah Shea, lived in number three.”

While the loss of this type of small worker’s housing is what motivated the pair to write Modest Hopes, we agreed that here, tucked away and with 12 individual owners to contend with, land-hungry developers will likely stay away.

Next, we marvelled at the demolition-by-neglect taking place at the bottom of Broadview Ave. (and judging from Google maps, this row of houses hasn’t seen occupants since 2007), before ending our architour on quiet Lewis St., where beefy 1920s Craftsman style houses rub elbows with one-and-a-half storey cottages.

“I think, for us, it wasn’t just the buildings themselves that were appealing,” finished Ms. Valpy. “It’s archives, it’s directories, and I would speak to the great-great-grandchild … or find a great step-niece and they would have details because they were into that sort of thing; you just start to collect little pieces and a chronology.”

Put together in Modest Hopes, these little pieces fill a big gap in the Toronto story. 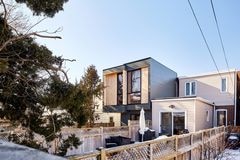 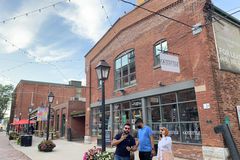 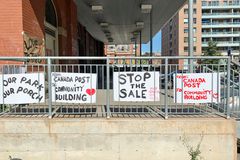