It’s the one thing heritage restoration expert Drew Skuce, 38, did the math on. Each of the 100 ceiling tiles took two hours to manufacture: “Casting, popping, trimming [and] installation,” he lists. “That’s not painting, that’s not caulking, that’s not doing all the wiring first,” he continues with a laugh.

So how much time did Mr. Skuce, 38, spend on the rest of the building?

“Part of me is terrified to even think of it,” he says.

Suffice it to say that, in the two years he put his own restoration business, Paradigm Shift Customs, on hold to tackle the family-owned building at 51 Grand River St. N. in Paris, Ont., his social life was nonexistent. An entire year was focused on restoring the old tin ceiling alone, entombed, as it was, above a 1980s drop ceiling with a mess of ductwork and random wiring inside.

It all started, he says, when the tenants moved out. Should his father’s successful bookstore next door, Green Heron Books, move in? No. 51 was more than double the size, so Roy Skuce would have that much more inventory to manage. And would it be as cozy? Eventually, it was decided that Skuce-the-younger would take on its management.

Deciding to bring it back to 1918, however, was decided by the weather.

A bad winter had caused ice damming to “zipper off” the 1980s aluminum siding off the building’s rear façade, as well as damaging enough of the drop ceiling to warrant full removal. Mr. Skuce knew about the old tin ceiling, of course, but it was after he “got a lawn chair from my parent’s place and reclined back as far as possible and stared at the ceiling for the entire night” that his fate was sealed: “I started seeing the ghosts of what the building used to be,” he says, noting that the building had been constructed around 1905 as “The Gem” movie theatre but spent most of its life as an A&P supermarket, which took over the space in 1918. “I realized that the only time I would have to be able bring this place back is right then; I couldn’t move tenants in and then work over top of them, that would be utterly insane.”

So, a different kind of insanity began: How to replace those 100 missing tin ceiling tiles? Well, before he could even begin, he and a buddy had to reroute the plumbing and bits of the heating, ventilation and air-conditioning system that was in way, “and there were two furnaces in the basement, too, and the pipes were all crossed over so when one apartment upstairs would turn on their thermostat, the bookstore would start getting cold,” Mr. Skuce laments. He looked into having new tin stamped by Brian Greers in Petersburg, Ont., but, because nine different patterns made up the “extinct” composition, and each new die would cost $1,000 to cast, he put on this thinking cap instead.

Using his former training in theatre special effects, he created standard silicone moulds of “the very best tiles that I could find,” he explains. “I straightened them all out, took them on the anvil, whacked all shapes back, so everything was just nice and clean.” Then, at the Sculpture Supply Canada store in Toronto he found “Aqua-Resin” – a non-toxic, fire-rated gypsum/fibreglass hybrid – that would allow him to manufacture his own lightweight yet superdetailed reproductions that “once they were painted out, you could not tell the difference.”

Of course, the missing 15 feet at the front posed an altogether different challenge. Not a duplicate of the rear of the store, these had framed the 1918 V-shaped entrance to the A&P. And since all that was left were nail holes, Mr. Skuce spent a lot of time on a ladder marking these with chalk: “And then I lay down on my back on the ground and did a fun game of connect the dots.”

Interestingly, his choice as to “when” to restore the building to is at exactly the period when the movie theatre left and the A&P moved in because that’s what he has “the most of.”

“Follow the information and try not to hypothesize, because assumption will kill you. The moment you run out of evidence is where you stop. I think that goes for archaeology, too,” he laughs.

Speaking of evidence, it was through vintage photographs – some from the local historical society but many resulting from a Facebook call – that Mr. Skuce was able to recreate the original cornices, corbels and other bits and bobs that make up the original marquee (which now resides on the back of the building; he’s doing another for the front). Many were parade shots in which only a little of the storefront was caught in the background: “If it’s got five pixels of the building, I will take it,” he laughs.

By taking real-life measurements of the buildings on either side, he could then put the photos into a computer program, zoom in and figure out fairly accurate measurements for his millwork drawings: “When you start getting even numbers … you know you’re heading in the right direction,” he explains, adding that pre-Second World War boards were offered in standard sizes. “Why would [a carpenter] make more cuts to make life hell? … It’s stuff my grandfather taught me.”

As for the months of hell it took to bring the floors back, he blames his mother. She’d spied the original three-quarter-inch maple flooring under the “sedimentary layers going back a hundred years” – including A&P’s distinctive red-and-white checkerboard – so, knowing she’d want it revealed, he modified a twin blade saw to penetrate down to within a cat’s whisker of it. With hundreds of perforations over the 1,500 square feet, Mr. Skuce could then rip up manageable squares with a pry bar. “That sucked,” he laughs.

What doesn’t suck is what the Gem Marketplace looks like today. Home to independent startups selling everything from handmade crafts and eco-friendly items to soap, candles and jewellery, all lit by vintage lighting (but that’s another story) – the building is now open to a whole new clientele that will appreciate its heritage charms. But, this author wonders, do they look up at the ceiling?

“They do,” vendor Elaine Kellam of KBC Designs says. “We have a lot of people that will just come in and stare and [say] ‘Wow,’”

“I didn’t even know that,” Mr. Skuce says, the hint of a smile forming on his tired face. 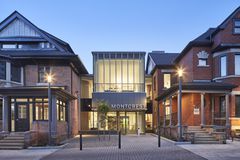 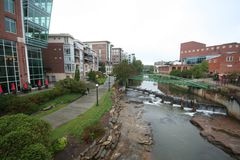 Architects have a vision for a denser downtown Toronto
Subscriber content
October 11, 2019 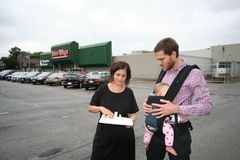