When Sun Life Canada in 2016 pitched a plan to develop a 59-storey tower at 100 Simcoe St., a block north of King West, the insurance giant and its architects, Diamond Schmitt, envisioned a project fairly similar to many high-rises in the area. But it would also feature purpose-built rental apartments instead of condos as well as a nine-storey podium that included both office space and retail.

The proposal called for the tower to replace a five-storey brick building that dates back to 1904 and sits on land once occupied by Upper Canada College. Designed by a prominent Toronto architect, it had housed, at various times, a printing company and a well-known stationery firm. However, according to heritage research conducted by ERA Architects, the structure has undergone numerous expansions and modifications, leaving “little, if any” of the original structure intact.

“We said we didn’t think it was worth keeping,” says George Baird, a former dean of the University of Toronto’s architecture faculty who was hired to offer a second opinion. But the city’s heritage preservation officials disagreed, and a year later recommended including the building on Toronto’s heritage register. The Sun Life application appears to be on hold.

Such stare-downs aren’t uncommon in the annals of Toronto development. What ups the ante in this case is it represents one of many tests of the King-Spadina Heritage Conservation District, which council approved in 2017 in response to concerns that the downtown development boom will not only sweep away historic buildings – such as 401 Richmond, a lively arts hub that operates out of an historic warehouse – but scrub the area of its heritage character.

Heritage-protection rules tend to increase property values in architecturally cohesive neighbourhoods. But commercial districts pose a more slippery problem because heritage conservation districts, or HCDs, aim to slow or halt change in areas that are, almost by definition, in a constant state of flux. What’s more, an area’s heritage appeal can pivot dramatically as urban patterns and tastes evolve. Many older commercial buildings in the King-Spadina area were virtually left for dead when industry moved away in the 1970s and 1980s. But waves of artists and small businesses gave them a new lease on life – a regeneration dynamic that whet the public’s interest in the area’s heritage character – and then attracted the development now viewed by some to be an existential threat.

The King-Spadina HCD, which extends from Bathurst and Wellington over to University and includes Spadina’s former garment district, contains a registry of 330 buildings that are seen to contribute to the area’s historic feel, among them 100 Simcoe. They range from Victorian-era row houses to brick-and-beam warehouses and other industrial structures.

As a planning tool, HCDs are meant to closely regulate change and renovation activity in areas that display some kind of heritage profile that goes beyond the architectural value of individual buildings. Their use in North America traces back to the 1960s work of New York heritage activists, who sought to protect historic building and neighbourhoods from demolition and redevelopment.

Since 2002, Toronto council has approved 14 HCDs, most, although not all, in residential areas. Queen West is the only uncontested one that focuses on a commercial district. However, property owners are appealing five others, including King-Spadina, historic Yonge Street and the St. Lawrence HCD, and the city is pressing ahead with nine others, including one that will cover the city’s famed Kensington Market.

The King-Spadina HCD case, which has caused a buzz in the city’s tight-knit heritage community, is presently in prehearings before the Local Planning Appeals Tribunal (LPAT), which is in the process of consolidating 81 separate appeals by various property owners. The case won’t be resolved anytime soon.

Of the more prominent appellants are a group of owners and builders known for working with heritage properties, among them Allied REIT, Hullmark and Westbank Corp. All have substantial holdings in the area. Prior to the introduction of the HCD, Allied completed the Queen Richmond Centre, an award-winning design by Sweeney & Co., which features an office tower erected on stilts above and beside an old warehouse that once housed the original Weston’s Bakery. The King-Spadina HCD design rules would likely not permit this kind of project because it requires so-called three-dimensional conservation, not façades.

Arguing that some of the HCD’s design regulations have no historical basis, Ms. Costello says the city could draw on a range of existing regulatory tools, including the Official Plan and provincial heritage designation laws, to protect historically significant buildings and heritage corridors, like Spadina Avenue.

But Ms. MacDonald points out that these tools do nothing to protect King-Spadina’s "sense of place.”

“We believe the dynamism of these areas is very much rooted in their heritage value.”

Ms. Costello, however, says that in some of the HCD’s four designated “sub-districts,” such as Wellington Street, council blessed projects will “completely transform” the area within the next three years, raising questions about the effectiveness of the HCD.

The “paradox” of the King-Spadina HCD, Prof. Baird says, is that the area has undergone such a dramatic sea-change with the high rise boom of the last 15 years. Citing buildings such as the oft-renovated warehouse at 100 Simcoe, he adds, “It’s impossible to argue that these buildings still define the character of the district.”

Replies Ms. MacDonald: “What we think is that it’s possible to have excellent conservation and have dynamic [commercial] areas.” 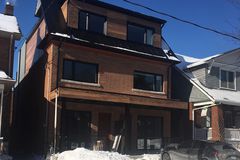 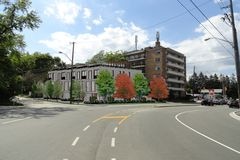 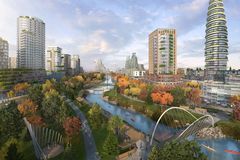