Robert Hogue, senior economist at Royal Bank of Canada, is declaring the correction in Canada’s housing market over.

The July sales numbers from the Canadian Real Estate Association prove it, he says, after the organization reported that sales rose 3.5 per cent from June’s level.

July marked the fifth consecutive month of rising sales, putting the level about 15 per cent above the six-year low reached in February, the CREA says.

“The recovery is on,” Mr. Hogue says.

The benchmark MLS Home Price Index price eked out a 0.2-per-cent increase in July from the same month last year to mark the first rise in six months.

Mr. Hogue says the national market appears to be getting over the “stress test” and other cooling measures and a drop in interest rates this year has helped too.

“Over all activity in Canada was the strongest since December, 2017,” Mr. Hogue says.

In January, 2018, the country’s banking regulator imposed new rules that require most lenders to test the ability of borrowers to pay back a mortgage at a higher rate of interest.

The so-called stress test has been blamed for cooling the market significantly in cities such as Vancouver and Toronto because buyers have a hard time qualifying when prices are so high.

The slumping markets of Vancouver, Calgary and Edmonton are now in the early stages of a turnaround, he says, while things are back on track in Toronto. Markets in Quebec and Atlantic Canada did not suffer as much as cities to the west, so gains they recorded in July are a continuation of a long-standing trend, he says.

Mr. Hogue cautions that the recent recoveries in sales in Vancouver – along with moderate acceleration in sales and prices in Toronto and high-octane increases in Ottawa and Montreal – could make things complicated for policy-makers.

In Ottawa and Montreal, for example, very tight supply and heavy demand keep fueling property values higher in both markets, he says.

“Any further acceleration could become an issue if it sets off unwanted speculative dynamics.”

Many industry players have been pleading for a loosening of rules and an easing of the stress test as the market has remained sluggish in the past couple of years.

Mr. Hogue warns that a few more months of activity such as that in July and the housing policy debate in Canada might take a sharp turn – toward a further tightening of rules.

This is bound to be a hot topic in the upcoming federal election, he says.

Mr. Desormeaux still considers Canada’s housing market in balanced territory, but the ratio between supply and demand continues to edge closer to a sellers’ market and was at its highest point since January, 2018, he points out.

The economist points out the slowdown brought about by various government and regulatory policies seems to be giving way to an upswing across regional markets.

Sales activity remains on an upward trend in and around Toronto and Vancouver, Mr. Desormeaux says, with the July results making him increasingly confident that Vancouver’s downturn has bottomed out.

Looking ahead, Mr. Desormeaux expects job creation to ease after a surge in the early months of the year and that will rein in demand, he says. In Southern British Columbia and the Greater Golden Horseshoe, less speculative activity should also contribute to more modest price gains compared with the frenzied run-up in 2016 and 2017.

“Still, interest rates remain stimulative and healthy population growth via stepped-up immigration will likely continue to put a floor under housing market activity for the next several years,” he says.

At Capital Economics, senior Canada economist Stephen Brown believes the Bank of Canada will reduce its key interest rate twice before the end of 2019.

Mr. Brown says some on Bay Street have recently joined the camp that believes the central bank will loosen policy this year.

A cut could come when the bank’s trendsetting committee meets in September, Mr. Brown acknowledges, but he thinks October is a more likely time for the first decrease.

“While the Bank has not signaled a cut, there is a school of thought that central banks should signal in advance on the way up and surprise on the way down,” he says.

Mr. Brown points to the housing market, the strength of the domestic economy and the upcoming federal election as the main reasons he doesn’t think the Bank will be ready to pull the trigger just yet. 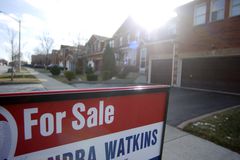