The Greater Toronto Area real estate market is adjusting to tightened restrictions on doing business as properties continue to swap hands in the midst of the COVID-19 pandemic.

Real estate agents are using technology to bring buyers and sellers together in some cases and delaying listings in others.

The Government of Ontario still includes many of the services that make up the real estate industry on its list of essential businesses, but it recently prohibited the hosting of public open houses.

“We were first out of the gate to do it,” Mr. Maranger says of the virtual get-together, which drew about 30 attendees. “It was a good learning experience.”

The red-brick Victorian at 66 Brunswick Ave. in Toronto is listed with an asking price of $4.85-million.

One member of the team took viewers on a tour through the interior while Mr. Maranger operated the camera and image stabilization gear.

Mr. Maranger says two hours is a comfortable amount of time for a traditional open house. Online, one hour seems too long, he says, because prospective buyers tend to all bu

nch up around the same time. In future, he’ll limit the open house to 20 or 30 minutes.

He says that time limit would also make the tour run more smoothly because it’s challenging to juggle moving through the house, responding to questions from participants and getting people up to speed if they jump in late.

“If people arrive at different times, you have to greet them – you have to welcome them.”

But both agents say the livestream open house is just a stop-gap measure that can’t replace inviting prospective buyers inside to experience the ambiance.

“There’s a huge emotional element to purchasing a house,” Mr. Vermast says. “No technology will ever be able to replace that emotional aspect.”

Mr. Vermast says buyers are gradually accepting the new methods now that the rules around trading in real estate have become more clear.

“We were all on shifting sand before,” Mr. Vermast says.

Mr. Maranger say prices have been holding up so far because listings have not ramped up and homeowners are aware of the stellar prices achieved in February and early March.

“What we have not seen are any panicked sales,” says Mr. Maranger. “There just is not enough product out there to cause sellers to not act rationally.”

Some buyers have already sold an existing home and now need to buy another one but they’re not finding any discounts.

Throughout Toronto, some deals are still taking place but activity is sporadic.

Davelle Morrison, an agent with Bosley Real Estate Ltd., recommends that clients hold off on buying and selling unless they absolutely have to.

“There’s definitely a drastic drop in showings,” she says.

Now, a more likely scenario is that one or two bidders will arrive at the table.

“Some places are selling with multiples – but just not as many multiples.”

But for investors who plan to buy a property to rent, they may not mind buying from a virtual tour. That could allow them find a good opportunity now because competition is less fierce, she says.

Ms. Morrison received two conditional offers for a one-bedroom condo unit in Toronto the day before the state of emergency was announced earlier this month.

The seller accepted one of the offers, which was conditional on financing. But the buyer’s lender refused to approve the deal without an additional $60,000 for the down payment.

The buyer couldn’t come up with that amount so the deal fell through and the condo is back on the market.

Lenders and mortgage brokers are treading carefully around deals where buyers face a loss of income from a job or business.

Ms. Morrison has heard from a few owners of investment properties who are thinking about selling but she is also advising them to wait. Some tenants across Canada participated in rent strikes by withholding payment for the month of April.

“There are some that might not like that their tenant didn’t pay the rent and think that maybe they’re not cut out to be a landlord.”

According to the latest figures from the Toronto Regional Real Estate Board, sales jumped 49 per cent in the GTA in the first half of the month compared with the same period last year.

In the second half of March, sales dropped 15.9 per cent compared with the same period in 2019.

The price has dipped since February, when the average selling price was $910,290.

And while many agents are conducting business with strict safety protocols, industry groups are warning those who don’t to fall in line with the new rules.

Some agents are apparently still engaging in strategies such as going door-to-door in the search for new clients. The Real Estate Council of Ontario points out that this kind of practice is putting the public at risk and warns that agents will face sanctions and possible disciplinary prosecution if they disregard the advice of health authorities. 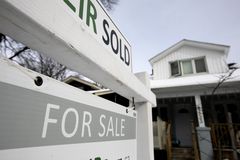 Buyers, sellers and agents grapple with a housing market shaped by coronavirus
March 25, 2020 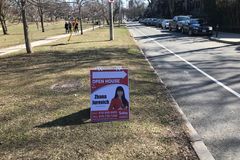