People from the Toronto area who are looking to buy a lakeside retreat north of the city are finding relatively few sellers in cottage country this year.

The scarcity is in turn pushing up cottage prices on some of the most sought-after lakes.

“It’s kind of the classic squeeze that the supply is going down but the demand is static or going up,” says real estate agent Paul Crammond of Chestnut Park Real Estate Ltd.

The trend which spreads from Orillia up to Muskoka, Lake of Bays, Parry Sound and Haliburton, mirrors the Toronto market, where the number of listings has also shrunk from this time last year and the increased competition is boosting prices in key neighbourhoods.

Across that swath of cottage country, there were 117 sales of waterfront properties in April, compared with 238 a year earlier, Mr. Crammond says .

Mr. Crammond adds that not every property saw such a dramatic surge in price: the mix of cottages sold tilted towards the high-end segment this year. “Prices did go up but there more expensive properties sold in April this year than April last year.”.

On the waterfront in Muskoka and Lake of Bays, 43 properties changed hands in April to mark a 43-per-cent drop from April of 2017.

Mr. Crammond says listings have been shrinking for the past four years. The Ontario economy is strong so people are less likely to need to sell because of financial hardship, he points out. Also, more neighbours are buying out neighbours without the cottage ever coming to market. And a large inter-generational transfer of wealth from older parents to their baby boomer kids has taken place.

Real estate firm Royal LePage is forecasting that prices for recreational properties in Ontario will rise 10.4 per cent in 2018 to an average of $535,885. Royal LePage, which surveyed agents across the country, looked at all types of vacation homes – with mountaintop chalets and forest cabins mixed in with waterfront cottages.

Real estate markets in the city and the country have been delayed by a long, cool, damp, spring, agents say.

Anita Latner of Anita Latner Realty Inc. says everything in cottage country is behind by about six weeks, including the painting, repairing docks and putting boats into the water. “The weather took its toll on everything. I was chopping ice here in April – thick ice.”

U.S. President Donald Trump’s Twitter tirades against Prime Minister Justin Trudeau following the meeting of Group of Seven leaders in Quebec and his outbursts against the North American free-trade agreement will not dissuade serious cottage buyers, in her opinion, but the stock market volatility may slow down some sales.

“They’ll find a way – it might just take a little longer,” Ms. Latner says of potential buyers who might be planning to sell stock in order to invest in a cottage.

She says sunny skies and warm temperatures are a bigger factor than politics and financial markets. “The weather trumps Trump at the end of the day.”

Mr. Crammond says people in the city don’t even think of venturing north when it’s cold and wet. “We need good weather for people to get revved up about cottaging. April was a disaster and parts of May we’re not much better.”

Mr. Crammond, who is selling a place of his own on Lake Rosseau this year as he moves to another cottage around the bay, says more listings have appeared with the warmer weather in the past 10 days or so.

Some real estate agents in Muskoka are setting offer dates when they think they might be able to entice multiple bids, he says. The practice is most common on the “Big Three” lakes of Joseph, Rosseau and Muskoka. “Before this shortage of property, we never did that.”

In areas outside of the Big Three, multiple offers are not common but a buyer might find less room to negotiate down from the asking price.

In another echo of the city market, there’s a divergence of trends. The most coveted properties sell quickly and even draw rival bids while others languish.

Mr. Crammond thinks that buyers have been slow off the mark because of the uncertainty surrounding the Ontario election. He has a sense that some potential buyers – especially at the upper end – we’re hesitating to make any big financial bets.

“People have been looking at properties but maybe haven’t been acting on them as much as they normally would.”

Now that a new provincial government has been elected, buyers may be willing to move.

He explains that cottage buyers are more sensitive to price hikes than city house hunters. While the Toronto market saw double-digit house price increases for several years leading up to 2017, cottage prices since 2009 have been creeping up at, or slightly above, the level of inflation.

“There’s a limit to what people can afford and will do. A cottage is a discretionary purchase,” he says.

“You can’t take buyers for granted that they’re going to pay any amount for your property.”

Prices in some segments have risen 25 per cent over the past four years. But some sellers try to aim for 15 to 20 per cent about that level when they list a property.

“Guaranteed it will sit there,” Mr. Crammond says. Buyers are very educated about market values. “They will knowingly overpay for a place in the city because they need a place to live. That’s not going to happen here.” 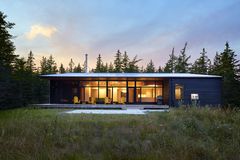