For 15 years, architect John O’Connor and his partner, Rick Hayward, spent their summer weekends yachting. They often set out from a marina in Midland, Ont., an hour and 40 minutes north of their home in Toronto. They would then explore the coves and bays of Georgian Bay’s 30,000 Islands – the world’s largest freshwater archipelago.

The pair’s boat, with three bedrooms and two bathrooms, had enough space to accommodate friends when they wanted company. Many times, the couple took trips just the two of them, meeting fellow yachters as they went or simply enjoying the opportunity to be reclusive.

On board their boat, the days were spontaneous and picture perfect They could head in any direction, drop anchor anywhere. The landscape of granite outcroppings, scruffy wind-swept pines and amber sunsets is the stuff of Tom Thomson paintings. “Some of those bays are incredibly secluded,” Mr. O’Connor says. “There would be no one around, just pristine water, stunning scenery.”

Despite the idyllic setup, four years ago the two decided they needed a change. “Owning a boat is a huge time commitment,” Mr. O’Connor says. “Boats require a lot of maintenance and are very costly.” Things were getting to a point where, during the summer, the couple always felt they had to spend their weekends on the water, to justify the constant effort and expense. “As in, people would invite us to a wedding, and we’d say no, sorry, we have to be on the boat,” Mr. O’Connor says.

As an alternative, Mr. O’Connor and Mr. Hayward decided to build a cottage – a place they could use year-round, not just in the summer like their yacht. Removing the seasonal constraint lowered the pressure on warm-weather weekends: instead of having use of their vacation home for a scant 12 to 16 weeks a year, they could come and go at their leisure.

In committing to a fixed location, the pair knew they would lose the freedom and variety of roaming Georgian Bay. But in choosing their site, they wanted a setting with the same beauty and calm they used to find cruising the 30,000 Islands.

In 2017, Mr. O’Connor and Mr. Hayward found their property: five vacant acres at the end of a lane, across from uninhabited, undeveloped Beckwith Island, and not far from their former marina in Midland. “There are only about five or seven other houses in the area,” Mr. O’Connor says. None of the other properties are in view of the home that Mr. O’Connor has since designed – providing the desired sense of seclusion.

The aesthetic of the resulting cottage is modern. There is expansive glass (though there are also deep roof overhangs to reduce solar heat gain in the summer). The siding is a corrugated, matte grey metal fashioned from industrial-strength ties. “I wanted something zero maintenance,” says Mr. O’Connor, adding that the ties are hidden behind vertical battens for a sleeker look.

However, there are also allusions throughout to the kind of heavy timber cabins traditionally found in Georgian Bay. The ceiling in the main-floor great room is lined with Douglas fir boards and supported by hulking pine beams (stained grey to compliment the grey tiles on the floor). The central fireplace has built-in shelves that display smooth beach rocks, a nod to the local practice of collecting and facing chimneys using foraged stones.

The architecture was conceived to suit its site. The 2,000-square-foot home sits at a high-point, offering commanding panoramas both north to Beckwith Island across the water, and south to the dense woodlot that comprises most of the property. Guests enter from the forest-side through a covered breezeway that frames a vista of Georgian Bay, and either leads straight down a hill to a deck and 200-feet of shoreline, or into the main house. The deck is positioned a bit lower on the property, slightly disconnected from the house, so that the guard rails, though glass, in no one way clutter the views.

Throughout, the design takes details from boating. In the great room, lights dot the walls just above the floor, much lower than the typical eye-level sconces or ceiling chandeliers. On a yacht, such lighting helps passengers see where they are walking at night. In Mr. O’Connor and Mr. Hayward’s place, it has a different benefit. The fixtures are below the windows sills. “That way there is no glare from the light in the glass,” Mr. O’Connor says. “That preserves the views out.” To ensure the room isn’t overly dark, there is a second set of lights, in a cove at the base of the ceiling, that shines a warm glow up to the Douglas fir boards, but again, doesn’t catch in the glass of the windows.

The floor plan provides something scarcely found on a boats, even large boats: privacy for guests. On the main floor, the master bedroom and the visitor’s quarters are as far away from each other as possible. They bookend the cottage, separated by a staircase, a kitchen, the dining area, a sitting space, a fireplace, the covered entry breezeway and another staircase. A weekend caller might be a heavy snorer or be rehearsing for a heavy metal act or like to tap dance at two A.M. – and no one would notice.

Likewise, the two guest suites in the basement are at polar ends of the layout, with the laundry, a rec room, a garage and the two sets of stairs in between. “We really wanted to be able to provide our guests what cottage weekends are all about,” Mr. O’Connor says. “Peace and quiet.” 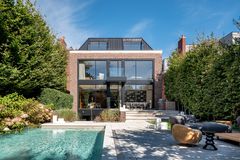 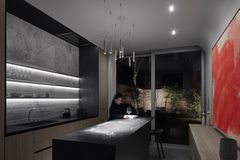 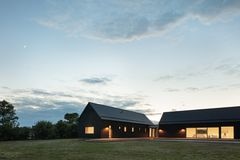